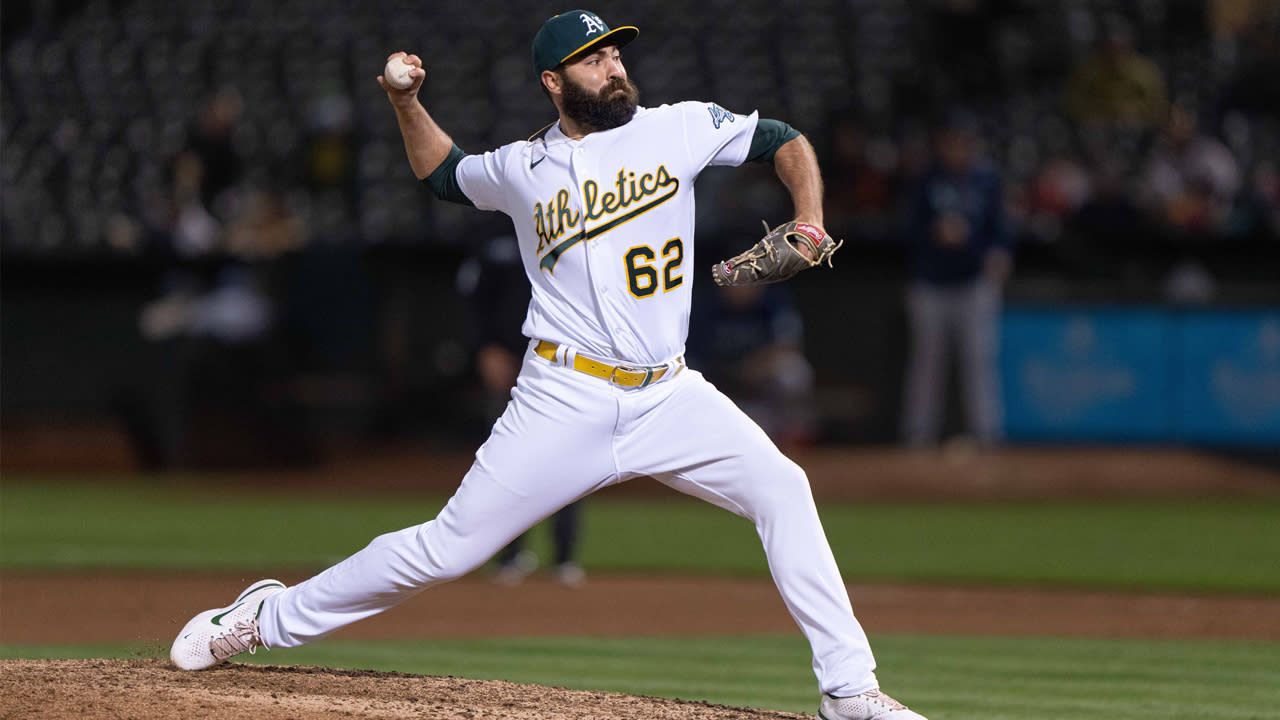 The Athletics have had one of the best bullpens in all of MLB this season, but you wouldn’t know that by watching them the last three days.

Remarkably, for the third straight day, the A’s blew a late one-run lead, losing 5-3 to the Seattle Mariners on Monday night at the Oakland Coliseum.

Closer Lou Trivino, who blew Saturday’s game against the Giants, was tasked with protecting a 3-2 lead in the top of the ninth against the Mariners, but gave up a solo homer to Ty France … tying the game.

Abraham Toro singled and Jake Fraley doubled, putting runners on second and third with no outs. Trivino initially recovered, striking out rookies Jarred Kelenic and Cal Raleigh. But the next batter, Jake Bauers, singled to left, driving in both runners.

“Just a couple tough outings for him,” A’s manager Bob Melvin told The Mercury News’ Shayna Rubin after the game. “I mean, I’ll go back and take a look at it later and see where a lot of the pitchers were, but his velo was better than we’ve seen it today. His first couple pitches were 96 or 97. Just had back-to-back tough games as far as the results go.”

The A’s now have blown one-run leads in the eighth or ninth inning the last three games, with the previous two coming against the Giants.

The latest painful loss knocks the A’s out of a playoff spot. The Boston Red Sox beat the Texas Rangers in 11 innings earlier on Monday, and now have a one-game lead over Oakland for the second AL Wild Card spot.

The A’s bullpen entered Monday’s game with a 3.61 ERA, the seventh-best in the big leagues, and they now have blown 20 saves, just one above the MLB average of 19, per Baseball Reference.

Early in the season, Trivino and lefty Jake Diekman were splitting closer duties, but recently, it’s been the righty getting the save opportunities.

Asked by The Athletic’s Steve Berman if a change might be coming, Melvin wasn’t exactly ready to commit to that.

“[Trivino] won’t pitch tomorrow,” Melvin said. “The workload, he was either going to pitch today or tomorrow. We were trying to break it up between all our plus guys these next two days, so I won’t have him available tomorrow. We’ll get through the off day and then see where we’re at.”

“I think we’re going to take a look back, but no, I think the stuff is there,” Gomes said in response to a question by Rubin. “Everything looks really good. Right now, just seems like unfortunate luck until we can figure something out.”

The A’s are watching their playoff hopes slip away, and they need to get the back end of their bullpen figured out quickly if they want to make a run in the AL West or Wild Card races.

ICYMI in Mets Land: David Stearns discusses interest other teams could have in hiring him

ICYMI in Mets Land: David Stearns discusses interest other teams could have in hiring him