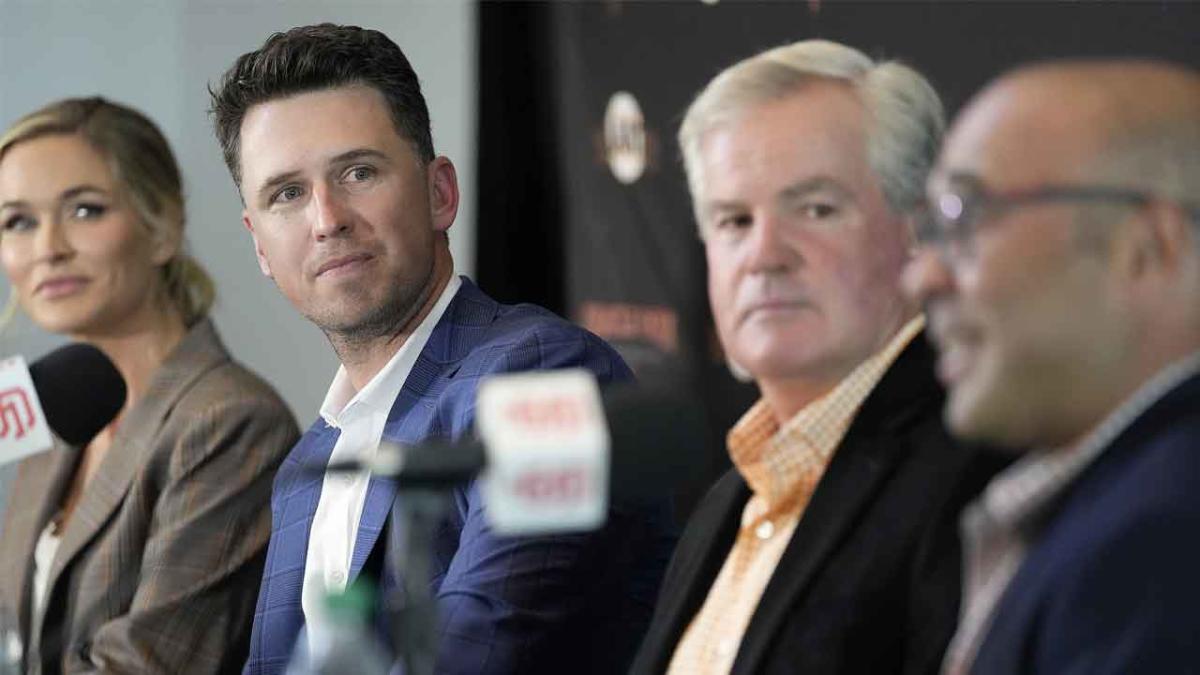 SAN FRANCISCO — The Giants knew they wanted to take a serious run at Carlos Rodón in the offseason, and when the lockout halted free agency in early December, they ended up with more than three months to go over every inch of the left-hander’s big league career.

They dug deep into the characteristics of his overpowering fastball. They gathered as much information as they could on the shoulder soreness that scared off other suitors, as well as past injuries that have kept him off the mound. They thought about how they could best keep him healthy over a 162-game season and make sure he was fresh for the postseason. They evaluated how he would fit into a close-knit clubhouse.

The process was exhaustive but as president of baseball operations Farhan Zaidi looks back on it, he has found that one of the most persuasive pieces of evidence was the reaction of a new confidante who is listened to for obvious reasons. Zaidi called Buster Posey during the lockout to discuss some of his plans, and after good-naturedly poking around about whether Posey might have any thoughts of returning to the field, he brought up free-agent targets.

“I mentioned Rodon and he was just like, ‘We have a chance to get that guy?’ So that kind of reset me,” Zaidi said last week. “I think a lot of his market was teams were maybe a little bit too focused on how he was injured in the second half of last season and not recognizing his ability to do what he’s done for us these first few starts. Having Buster in that role has been a good governor for us getting too mired in some of the front office thinking that can keep you from making an obvious decision.”

The Giants pride themselves on discussing every potential move from every possible angle, but sometimes the math is actually pretty simple. Sometimes you just need one of the best players of his generation to remind you that, uhh hey, that left-hander you’re chasing is really, really talented.

“Scott, myself, Kap, we’ve all relied on Buster a lot in this role,” Zaidi said. “And that was a prime example.”

Posey spent a dozen seasons reading hitters’ swings and pitchers’ repertoires, and did so at such a high level that his next baseball stop will be Cooperstown. The Giants will tap into that knowledge any chance they get, but since Posey’s surprise retirement the first week of November, they have been adamant that Posey will determine to what extent he is involved. Through their first months without him, they have found that, at the very least, he seems to be one of their biggest fans.

Posey has remained in the Bay Area with his wife, Kristen, and four young children. His former teammates say he checks in via text regularly, and all are thrilled with how happy and content Posey seems in retirement. He is a full-time dad, with occasional trips to the golf course and time spent coaching his two oldest — 10-year-old twins Addison and Lee — in softball and baseball.

At nights, Posey seems to be watching a lot of the Giants, and it’s not unusual for a player to come back to the clubhouse after a game and find a text from the longtime face of the franchise, often a lighthearted one.

“It’s usually nothing constructive,” catcher Curt Casali said, smiling. “The last game in New York, when I got hit in a touchy area twice in the same game, he wanted to know how the boys were doing.”

That text included an “ouch” emoji, with Posey feeling his fellow catcher’s pain. Shortstop Brandon Crawford is one of Posey’s closest friends and said they text often, but the conversations are no different than they were when the two were teammates. Posey, Crawford, Brandon Belt and Evan Longoria have long gone back and forth in a group text thread and the three current Giants allowed the retired one to stick around.

“I mean, really, I’m the only one playing out of that group right now anyway,” Crawford deadpanned.

While the busy start to the season has kept most from seeing Posey away from the field — Logan Webb had to turn down a golf invitation and said a 12-year-old version of himself would have been horrified by that move — he has stopped by Oracle Park a couple of times, including last Sunday, when he brought Lee with him. Bullpen coach Craig Albernaz, who instructs the team’s catchers, was in the coaches’ room when someone walked in and said “two-eight is here.”

Albernaz ran out for a Buster Hug, but he didn’t need to ask for Posey’s observations on what he was seeing on the field. Posey and Albernaz chat often, and he said he has gotten a couple of helpful texts from Posey this season, one an observation about something Joey Bart was doing and another a thought on strategy.

“It’s funny because it’s something he did even when he was here, he would shoot me a text in the morning with some observations,” Albernaz said. “It’s great. When he’s played for that long at that high a level, I always want him to be open and share what he sees.”

All of Posey’s old teammates and coaches will have a chance to catch up this weekend when the Giants hold Buster Posey Day. Posey will be celebrated on Saturday, and while he was never one to seek the spotlight, his friends are happy the Giants are holding the event so early. More than anything, it will give fans a chance to show their appreciation since Posey retired out of the blue during the offseason.

“I think it’s kind of fun and funny at the same time that we’re doing a day for him and wondering if he’s going to show up for his own day because he’s just not about himself,” Casali said. “But he deserves a chance for the fans to say goodbye and thank you. Obviously, he did surprise everybody with the retirement last year and this will be a good way for some closure, I think.”

The Giants have kept quiet about what they have planned for Saturday, but several of Posey’s former teammates are flying in for the event, including some high-profile ones, and a lot of the staff members who helped break Posey in a decade ago are expected to attend. They’ll get together with fans and current Giants to honor a man who retired near the top of his game and doesn’t seem to have many, if any, regrets. If Posey’s recent appearances are any indication, he’ll show up looking like someone who could still help the Giants.

Crawford, who is the same age as Posey, said it’ll be a little strange watching him get honored so soon, but it is something he has gotten used to in recent years.

“Guys that I played with or against — not even in the early parts of my career, maybe in the middle — are coaching against us or something like that,” he said. “You kind of get used to it after a little while, but yeah, somebody like Buster who I’m obviously closer with, it’s a little different. But I also understand it because he’s been such an important part of our franchise.”