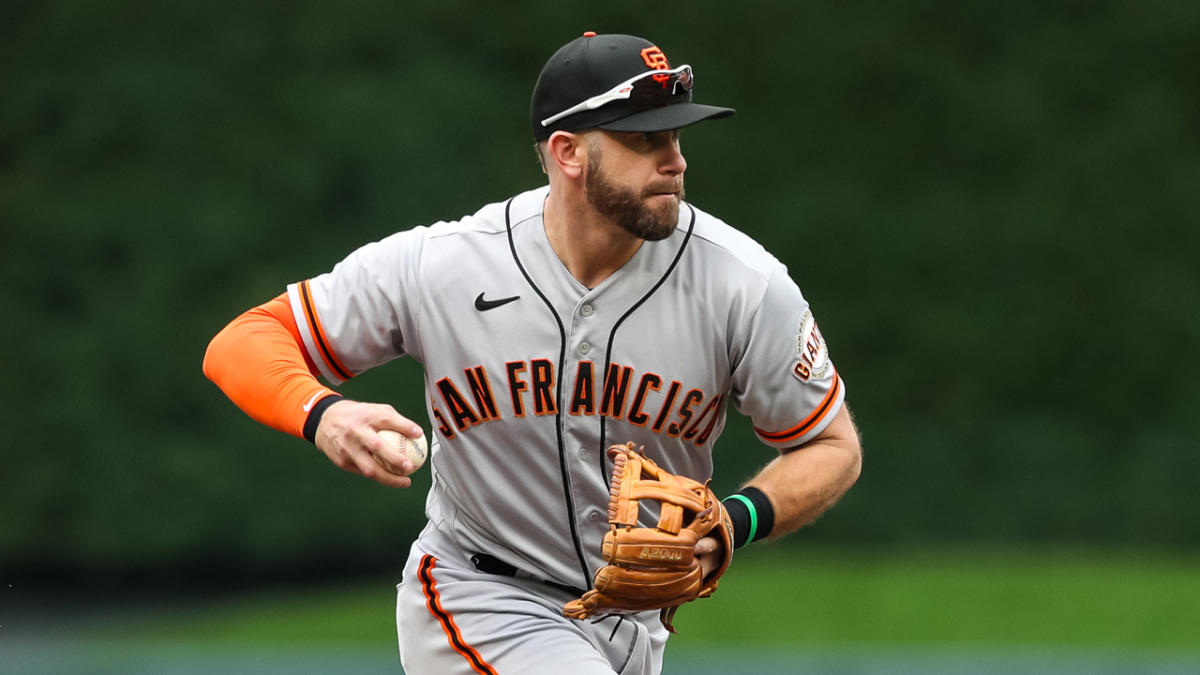 CHICAGO — It was a bit of a surprise when ESPN picked up the Giants vs. Chicago Cubs as a Sunday Night Baseball matchup this late in a down year for both organizations, and the network’s producers probably were in for their own surprise when they arrived this weekend and tried to find a Giant to mic up during the broadcast.

A roster built on platoons doesn’t exactly lend itself to star power, and with lefty Wade Miley on the mound, Joc Pederson, Brandon Crawford and Mike Yastrzemski all got a night off. The outfield, the best spot for a mic’d up player, was made up of two recent additions — Lewis Brinson and Austin Dean — and rookie Luis González.

As producers looked down the roster, three-time All-Star Evan Longoria was a very easy choice. And he was game, wearing a microphone and talking to the broadcast team in the bottom of the second inning of a 4-2 Giants win. During the appearance, Longoria reiterated that he’s feeling good physically and likely will return for a 16th big league season if the Giants pick up his option.

“I’d love to come back. I’d love to play here again,” Longoria said. “I kind of want to fulfill my whole contract. That was my goal from the beginning, was to be effective and play as many games as I could throughout the course of my contract.”

Longoria pointed out that the option belongs to the Giants. At points of his tenure in San Francisco, it has looked like an easy decision to turn it down and instead pay the $5 million buyout.

After years of producing in the heart of Tampa Bay’s lineup, Longoria was roughly a league-average hitter in his first three seasons following a trade to the Giants. But the new staff has helped him turn back the clock.

Longoria has a .249/.323./459 slash line this season with a dozen homers, and his OPS is up to .852 against lefties a year after it was 1.088. Over the last two seasons, he has a wRC+ of 120, making him one of the team’s most effective hitters on a per-plate-appearance basis. That ranks fifth, behind Pederson, Brandon Belt and two players no longer here — Buster Posey and Darin Ruf.

At 36, Longoria is not close to his physical peak and is now five years removed from his last Gold Glove, but he is by far the Giants’ best current option defensively at third, relying on soft hands, an accurate arm and the internal clock that comes with having played a position in the big leagues for nearly 1,800 games.

“Over the course of the last couple of years, although the volume hasn’t been there, the performance when he has been on the field has been really excellent as a defender and as an offensive performer,” manager Gabe Kapler said before Sunday’s game.

The first part of that statement is where any hesitation would come in. Sunday’s game was Longoria’s 76th of the season after he played just 81 games last year, with a sprained left shoulder costing him much of last summer after a hot start to the season. Longoria has three IL stints this year, for his hand, his oblique and his hamstring.

If the Giants exercise his $13 million option, they will do so knowing that he won’t be an everyday player and might once again give them just half a season. But the production could make that somewhat appealing, as could the roster situation.

The Giants are going to play David Villar every day this month and hope he’s a big part of their future, but Villar can play first, second, third and possibly the outfield. J.D. Davis can play both corner spots. One of the Giants most intriguing prospects, Casey Schmitt, is an elite defensive third baseman, but has only just reached Double-A.

Bringing Longoria back wouldn’t necessarily block Villar, Davis or Schmitt, and Kapler pointed out Sunday that he likes what he’s seen of Villar when he has moved around. Kapler was careful to note that no decisions will be made in September, but he added “there’s a world that exists” where Longoria makes a lot of sense as a big part of the mix. For a team that has played guys Kevin Padlo, Luke Williams and Dixon Machado on the infield this year, the depth is appealing.

“You could see everything co-existing,” Kapler said.

Longoria is one of the leaders of the clubhouse, joining Crawford and Belt, both of whom have been here for a decade. In an odd way, his future in San Francisco could be tied to those two.

The Giants are intent on getting younger and more athletic this offseason, so running it back with Longoria and both Brandons doesn’t seem like Plan A, but Belt just had knee surgery and is a free agent at the end of the season, and there is a chance he retires.

Even as they try to get younger, the Giants could get away with having Longoria and Crawford leading the infield for one more season, with Thairo Estrada, Villar, Davis, Schmitt and others filling in around them. If Belt doesn’t return, there will be a lot of first base plate appearances to cover, and the DH spot adds another option. When Longoria has been unable to physically handle third, the Giants have had him DH against lefties as much as possible.

The call is one that the Giants have time to make. Option decisions don’t have to be made until after the World Series, and the Giants have a few weeks left to see how Longoria finishes. Longoria does, too. He feels good physically now, but he’s just a few days removed from running the bases gingerly because of the hamstring strain.

Longoria wants to play out his contract, though, and it has always included an option for 2023. The $13 million seems like a big number, but $5 million of that is guaranteed no matter what. The Giants must now decide if they want to pay an additional $8 million for a player who has had trouble staying on the field, but is one of their best options when healthy.

“What he’s shown on this trip and what he’s shown over the last couple of years is still a very effective Major Leaguer when he’s on the field,” Kapler said. “The trick is now to figure out how to keep him on the field as much as possible, not just for this year but for whatever happens for him next year.”

Kirk Cousins for MVP? Cowboys in trouble? Plus, who are NFL's 10 best teams?