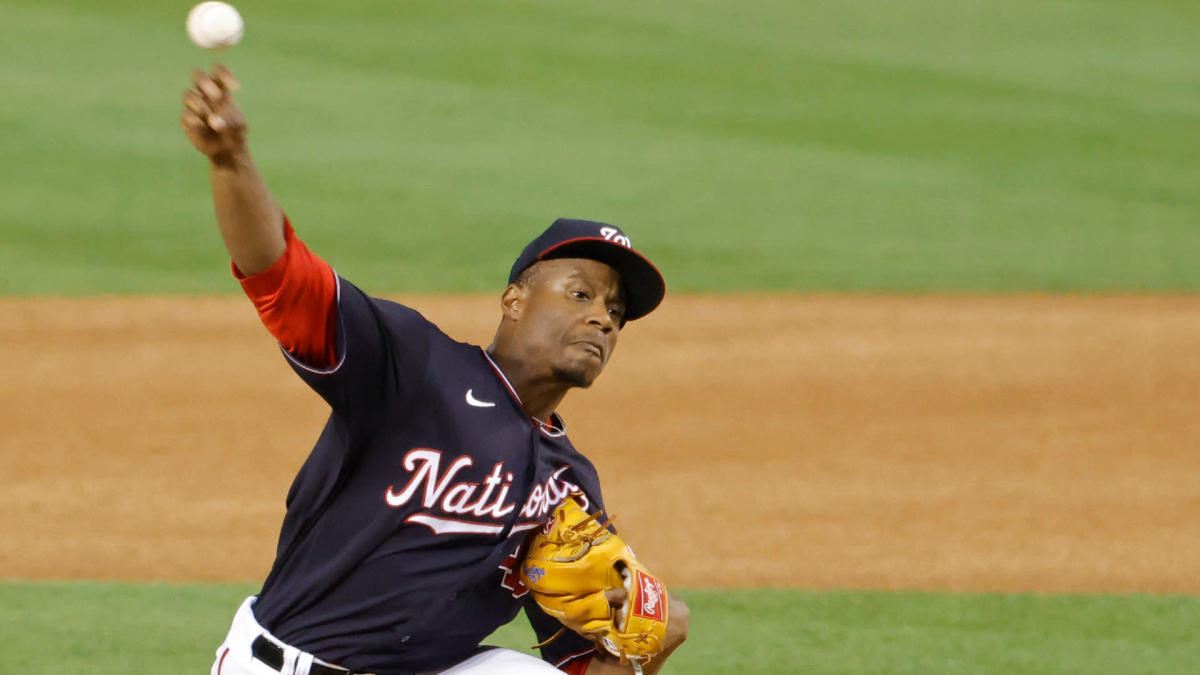 For Josiah Gray, not all home runs are created equal originally appeared on NBC Sports Washington

Some home runs hurt more than others.

Nationals starter Josiah Gray allowed three long balls in a 6-1 loss to the Houston Astros on Friday, raising his total on the young season to eight. The Astros jumped on him immediately; Jose Altuve took him deep on the first pitch of the game and Yuli Gurriel homered five batters later to cap off a five-run first inning.

Gray was missing his spots early and leaving the ball right over the plate. The Astros, who entered play Friday with the fourth-most home runs in baseball, weren’t going to miss them.

“They were hitting strikes,” Gray said after the game. “I wasn’t throwing them many balls. They were ready to hit from pitch one on so continue to get in the zone. Don’t worry about the results, worry about pitch to pitch and go from there.”

More than anything else, Gray is a flyball pitcher. He’s willing to challenge hitters up in the zone with his mid-90s fastball and they make contact on it more often than not. When he hits his spots, those flyballs turn into pop-ups and easy catches for his outfielders. When he’s not, they turn into hits like these.

Gray is content with giving up the occasional home run. As a pitcher who lives off outs made in the air, he can’t beat himself up when one goes over the wall. If Gray challenges a hitter with some high heat and he does damage with it, that’s a result he can swallow — especially if there isn’t anyone on base. See: Yordan Álvarez’s home run in the third.

“I have no issue with it,” Gray told NBC Sports Washington on Tuesday. “Especially solo shots. Solo shots keep you in the game. It’s the two-run bomb, the three-run bomb that takes you out of the game. But yeah I have no problem giving up solo home runs.

“I’m a flyball pitcher. Some of the greats are flyball pitchers — off the top of my head, Max Scherzer gives up a lot of home runs and a lot of solo shots so he stays in games and that’s my goal at the end of the day is to stay in the game. So if I give up a solo shot, so be it.”

Gray entered Friday’s game with a 50% flyball rate that ranked third highest in the majors. Right behind him in the No. 4 spot? Scherzer, at 49.4%. The New York Mets’ ace and former Nationals starter has made a Hall of Fame career out of allowing flyballs, even winning a Cy Young award in 2016 while leading the NL with 31 homers allowed.

Nationals manager Davey Martinez said after Friday’s game that he thinks Gray can follow a similar path to success if he learns how and when to throw his fastball up. Six of the eight homers he’s allowed this season have come on four-seamers, which he throws about half the time.

“We had a Hall of Famer here that gave up tons of home runs,” Martinez said, referencing Scherzer. “It’s when he gave them up, right? So he’s gotta understand that’s who he is but with that being said, he can limit damage because his stuff is good. As you can see, when he settled down [and] started hitting his spots, he was tough. He was tough for the rest of the night.

“We gotta get him through the game, get him to start right from the first inning on, making sure that he understands that he has to go in, out, stay away from the middle and use all his pitches…As a young guy, you want to establish your fastball. But sometimes, you gotta say, ‘Hey, I gotta do something different because these guys are on my fastball,’ and he did that. After the first inning, he settled down and he did that.”

From the second inning on, Gray allowed just two hits, a walk and a hit by pitch. He settled down and gave the Nationals six innings — tied for his longest outing of the year. The 24-year-old mixed in more offspeed pitches, finishing the game having thrown more sliders than fastballs for the first time in any start thus far in his career.

Álvarez is going to make the highlight reels for hitting a ball 438 feet, but that solo shot is something Gray can live with.

“That’s one thing I’ve credited my success to is challenging guys with the heaters in the zone and making sure they know it’s gonna be something that they probably get,” Gray said. “They have to come with their best because I’m gonna come with my best so I just continue to attack these guys is my goal at the end of the day and going from there.”

Assist of the Night: Grayson Allen