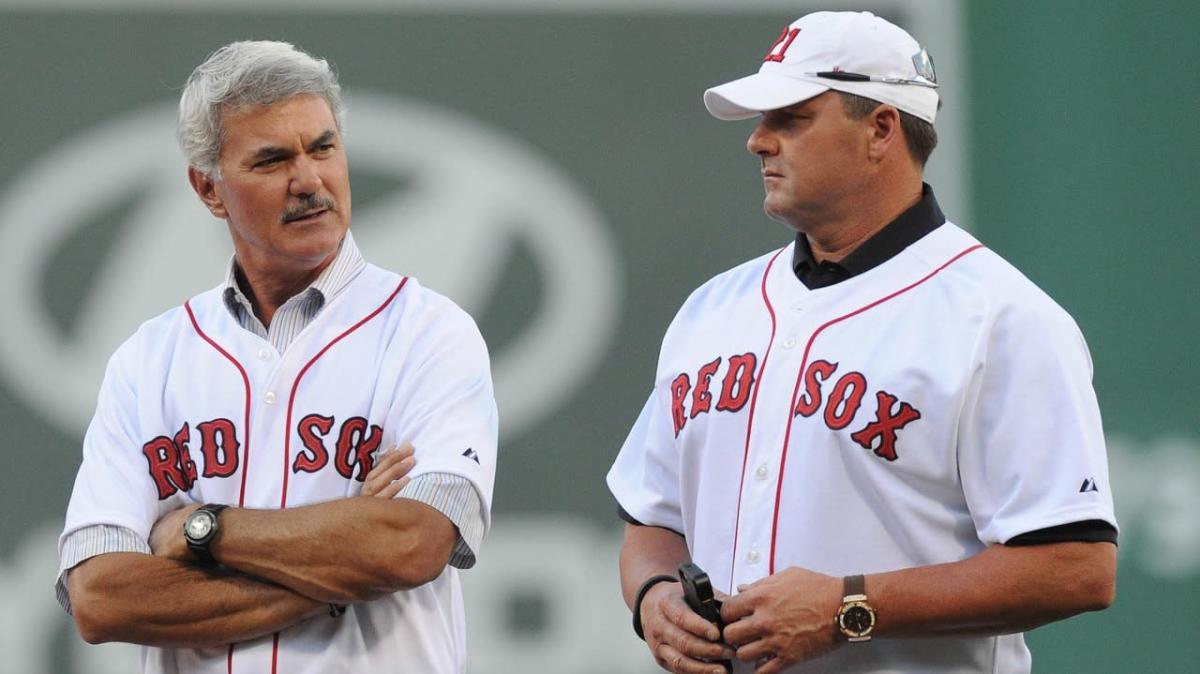 Tomase: Which of these ex-Red Sox could take long route to HOF? originally appeared on NBC Sports Boston

Whether you call it the Old-Timers Committee, the Veterans Committee, or the Era Committee, the Baseball Hall of Fame panel charged with considering those overlooked by the writers is about to receive an influx of former Red Sox greats.

After missing induction in their final years of eligibility Tuesday, pitchers Roger Clemens and Curt Schilling will now become someone else’s problem. That someone is a 16-member board known as the Today’s Game Committee, which evaluates those who played the bulk of their careers between 1988 and 2016. That group includes both Clemens, a seven-time Cy Young winner, and Schilling, a three-time World Series champion.

They’re not alone, however. As last year’s induction of Harold Baines shows, the committees are willing to reconsider lost causes. And that means there could be room for two more ex-Red Sox greats in right fielder Dwight Evans and right-hander Luis Tiant, whose cases will be taken up by the Modern Baseball Committee in charge of the years 1970-1987.

There’s also the Golden Days (1950-1969) and Early Baseball (pre-1950) Committees. Only one group makes selections each year, and it just so happens that the Today’s Game group is on deck, which means Clemens and Schilling will have their day in court, so to speak, this coming December. In 2023, Evans and Tiant will get another turn.

So what kinds of cases can each make? Let’s break them down.

In a world without steroids, Clemens would’ve been an easy first-ballot selection a decade ago. Unfortunately, he’s tarred by the connection to performance-enhancing drugs, and his next jury might be even tougher on him than the writers.

Each old-time committee includes Hall of Famers, and as a group they’ve outspokenly opposed the inclusion of PED cheats. The late Joe Morgan went so far as to send a letter to every voter in 2017 urging them not to select credibly accused players.

“We hope the day never comes when known steroid users are voted into the Hall of Fame,” he wrote. “They cheated. Steroid users don’t belong here.”

As a general rule, the older the electorate, the less likely PED players are to receive support, and the veterans committees don’t exactly skew young. Despite winning 354 games and striking out nearly 5,000, Clemens faces very steep odds — perhaps even steeper than he did with the writers, since he’ll need at least 12 of the 16 panelists to vote for his inclusion.

The Big Schill quite literally talked his way out of Cooperstown at this time last year, blasting the writers as “spineless cowards” and asking to be removed from the ballot. After topping 71 percent in last year’s voting, he could’ve made it this year by leaving well enough alone, but that’s not his style.

He hemorrhaged support and fell well short of enshrinement. His problem with the veterans committee won’t be his off-field musings, however, but his on-field resume. Despite winning over 200 games and striking out more than 3,000 while assembling one of the greatest postseason resumes ever, Schilling is considered a borderline candidate because he never won a Cy Young Award and never quite attained some of the longevity thresholds that made Hall of Famers out of pitchers like Don Sutton.

While changes to the current game have turned the 200-win threshold into a valid marker of greatness, it takes time for historical change to be recognized. A pitcher with Schilling’s resume might be an easy Hall of Famer in five years when it becomes clear how unlikely it is we’ll see another 300-game winner anytime soon.

That enlightened view is unlikely to reach the Modern Committee in the short term, so Schilling should probably prepare to keep waiting.

Evans only cracked 10 percent once in three years before falling off the ballot with just 3.6 percent of the vote in 1999. If only the statistical revolution had come along a decade sooner, his candidacy would’ve been viewed very differently.

Evans did things that fans and executives of the time didn’t generally appreciate. He walked nearly 1,500 times, allowing him to compile a lifetime on-base percentage of .370. He also won eight Gold Gloves in right field, where his arm ranks among the best in history.

He also happened to play a lot better in his 30s than his 20s, which means his best years came after many had written him off as a good but not great player.

With voters belatedly recognizing the way steroids skewed career numbers, Evans deserves a fresh look. He might have the best chance of anyone on this list.

He was also the victim of circumstance. He might’ve won the MVP Award in 1981 if the strike hadn’t shortened the season. And his career numbers suffer in comparison to the Steroid Era that immediately followed, with Evans himself ruefully noting that fly balls he hit to the warning track in 1985 might’ve been home runs off the bat of enhanced players a decade later.

However, if anyone benefits from the election of Baines, it’s Evans. The former compiled a lifetime WAR of 38.7 that’s one of the lowest in the Hall. Evans checked in at 67.1, well above Hall of Fame teammate Jim Rice (47.7).

With voters belatedly recognizing the way steroids skewed career numbers, Evans deserves a fresh look. He might have the best chance of anyone on this list.

If there’s a pitching equivalent of Evans, it’s probably the magnificent El Tiante. He quite literally twirled for 19 years spent primarily in Cleveland and Boston, winning 229 games with a lifetime ERA of 3.30.

A two-time ERA champ and four-time 20-game winner, Tiant finished in the top six of the Cy Young voting three times and made three All-Star teams. He also fronted one of the best teams in Red Sox history, the 1975 club that lost a classic World Series to the Reds.

The problem for Tiant is that he consistently falls short when measured against Hall of Fame contemporaries like Jim Palmer, Steve Carlton, Fergie Jenkins, and Bob Gibson. He didn’t compile longevity numbers on par with Bert Blyleven or Sutton, and he didn’t dominate for a shorter time frame like Sandy Koufax or Don Drysdale.

He’s right in the middle, and by virtually every statistical measure (including his lifetime WAR of 66.1), he falls agonizingly short. The composition of the committee that considers his case will decide his fate. If it includes a fierce advocate, he might have a chance.