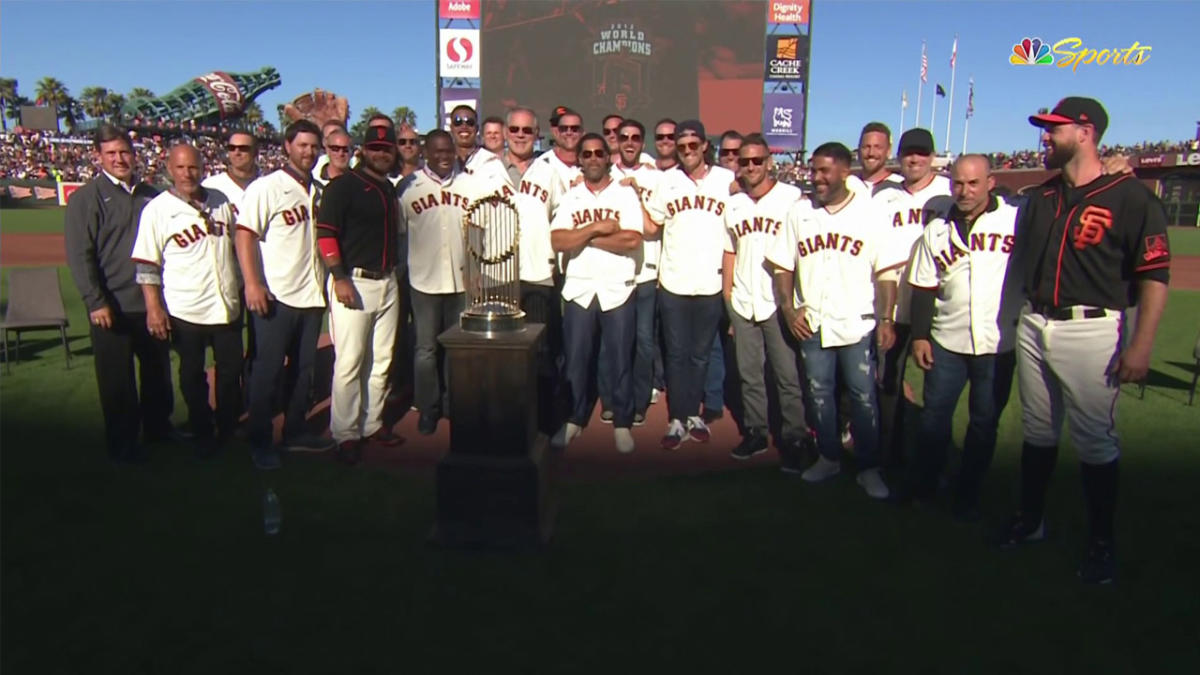 SAN FRANCISCO — The Giants turned back the clock before Saturday night’s game against the Pittsburgh Pirates, honoring the 2012 World Series team. Bruce Bochy made sure to pull out some of his favorite sayings from that incredible run through October, smiling as he reminisced about his “cockroaches.”

“They wouldn’t die,” Bochy said of a team that overcame huge deficits in the NLDS and NLCS before sweeping the heavily favored Detroit Tigers.

Much of that team returned to San Francisco this weekend for the 10-year reunion, and coaches and players emerged from the center field wall one by one before taking part in informal panels with team broadcaster Dave Flemming. Here are some of the highlights:

— As they were introduced, the Giants played the hits. Angel Pagan gave his salute and Marco Scutaro held his arms up to mimic his pose from Game 7 of the NLCS. (Also, more than one former Giant messed with Brandon Belt, who was one of the youngest players on that team.)

“I spent four years in Oakland and I never saw it rain like that,” Scutaro said. “I thoroughly believe that was a sign from (above).”

— The current Giants bullpen is a reminder of just how difficult it is to have a strong group year after year. A season after leading the Majors in ERA, they are 26th. What the Core Four did was truly incredible, and three of the four were back (Sergio Romo is pitching in Mexico). Bullpen coach Mark Gardner said he always appreciated the group for being “tough as nails.”

“They all thought they were throwing 98 mph and they weren’t,” he said.

Santiago Casilla said he told Bruce Bochy that he could give him two innings if needed, so hopefully Gabe Kapler was listening to the ceremony.

It’s not a 2012 celebration without a few shots at Jeremy Affeldt, so Flemming made him recount how he got hurt on a foul ball to the dugout during the NLDS. Affeldt said he watched Romo’s famous battle with Jay Bruce from the X-ray room at Great American Ball Park.

— There were some boos during the ceremony — when the Matt Holliday wipeout slide at second base was shown.

Scutaro has said many times that he felt like he got snapped in half on that play, but he walked away from it and was MVP of the series after going 14-for-28. Scutaro gave a shout out to trainer Davie Groeschner, who watched the ceremony from the dugout. “Dave, you’re the man!” he yelled.

— After introducing the coaches and players who were in attendance, the Giants listed off those who were unable to be in San Francisco. The loudest applause, of course, went to Tim Lincecum, who suffered the tragic loss of his wife, Cristin Coleman, in June. The Giants held a moment of silence for Coleman after the ceremony.