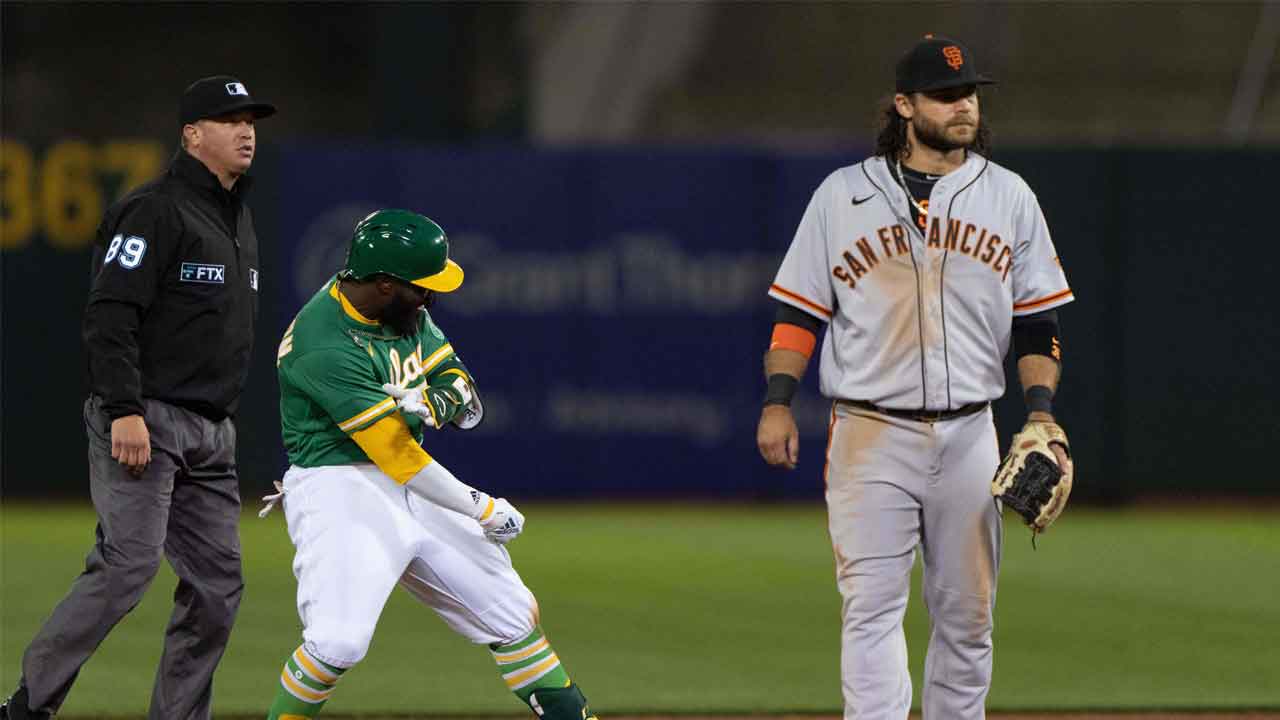 The Giants have used 261 pinch-hitters this season, nearly 50 more than the next closest team. They are accustomed to throwing waves of talented power bats at opposing teams in the late innings, but when they arrived in Oakland on Friday afternoon, they discovered a problem.

The visiting batting cage at the Coliseum is under the center field bleachers and there are only two ways to get there. You can walk through a gap in the fence during batting practice, but it closes up for the game. The only other way to get swings off as a visitor is to take a golf cart around the outside of the stadium, a trip that can be made in about four minutes if your foot is on the gas.

It was not an ideal setup for a team that relies on the platoon advantage, and once the game started, the Giants were faced with another problem.

Gabe Kapler has edged a lot of managers in the late innings this season, but Bob Melvin is as good as it gets and he has a strong and versatile bullpen. Once the Giants fell behind, they weren’t able to get their usual stream of positive matchups. They went down quietly, losing 4-1 to the A’s and watching their lead in the NL West shrink to 1 1/2 games.

James Kaprielian survived some hard contact in his five innings and turned a one-run lead over. Melvin first went to lefty Jake Diekman, who has reverse splits but got through lefties Brandon Belt and Brandon Crawford in the sixth. Diekman came out for the seventh and retired Alex Dickerson, with Kapler not opting for a pinch-hitter because of the splits and the fact that righty Yusmeiro Petit was warming up.

Petit got Wilmer Flores and Mike Yastrzemski before giving way to another old friend. Sergio Romo, who has allowed one run in his last 20 appearances, pitched around a Buster Posey single in the eighth. Lou Trivino shut it down in the ninth.

The Giants weren’t able to bring their usual late thunder. Kapler called it “very difficult” to match up with this A’s bullpen.

“In many cases we’re able to get really good matchups against some bullpens,” Kapler said. “This is one that’s going to be a real challenge, and I think that provides some good incentive to bring our best at-bats early in games and get out to a lead. It doesn’t always work out that way, and when it doesn’t, we just have to be prepared to grind through at-bats against guys like Diekman, Petit, Romo and Trivino.”

The Giants managed just two hits in four innings against the A’s bullpen, both singles. It’s been a somewhat quiet week offensively, but Kapler did think the at-bat quality was improved from the end of the Mets series. Still, the Giants didn’t have enough.

The loss was poorly timed, with the final out coming seconds before the 27th one in Los Angeles. The Dodgers beat the Mets for a second straight night and won for the 10th time in 11 games. The Giants have led the West by at least two games for the last month and had a five-game lead after last Friday’s win, but that has been mostly wiped away.

“We haven’t taken our foot off the gas,” Kapler said. “We haven’t won the last two baseball games, but that’s really not indicative of how we’ve approached these baseball games. I thought we were definitely prepared tonight — we didn’t execute tonight.”

Luis Rojas on Jeff McNeil's strike 3 call: 'The pitch was off, it was a good take' | Mets Post Game