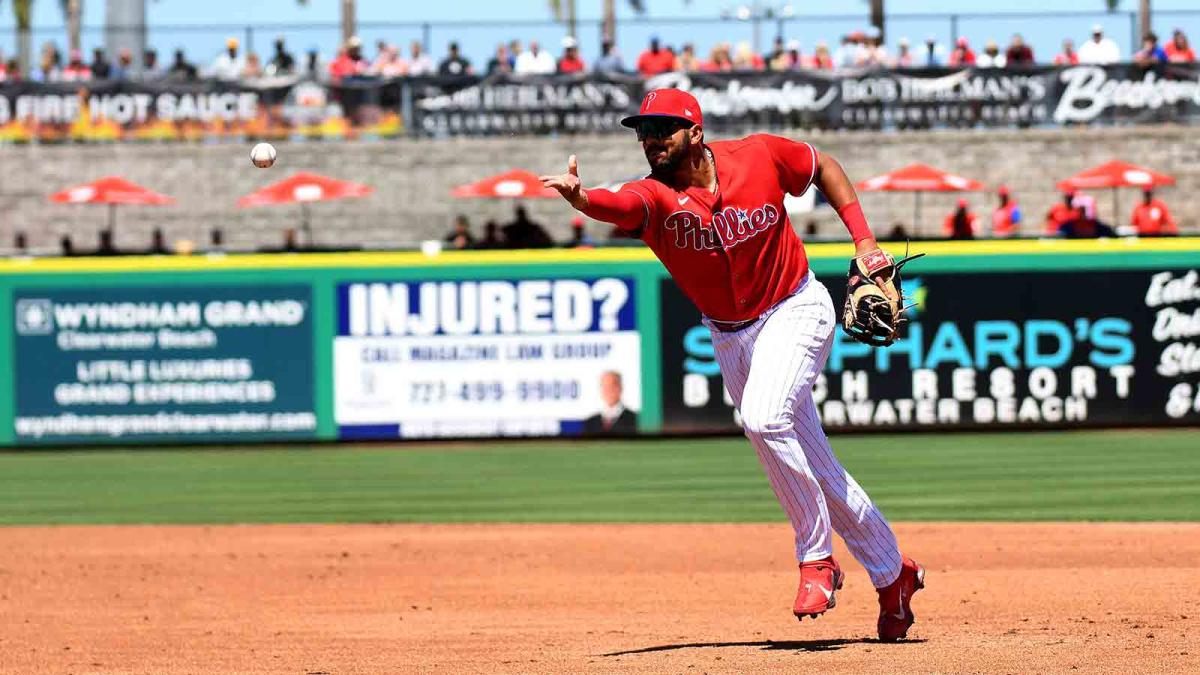 They beat the New York Yankees, 6-5, on the strength of a three-run rally in the bottom of the seventh inning.

A kid named Ethan Wilson tied the game with a line-drive RBI single and minor-league catcher Edgar Cabral followed with a hit to put the Phils ahead.

Keep an eye on Wilson. The 22-year-old corner outfielder was the team’s second-round draft pick out of the University of South Alabama last year. He’s a strong-bodied left-handed hitter with pop. Folks at the minor-league complex have been buzzing about him all spring. He gave the fans on the big-league side something to cheer about Friday.

So did another young player who figures prominently in the Phillies’ future. Shortstop Bryson Stott, the organization’s top position player prospect, stroked a pair of singles in his first two at-bats against Yankees’ All-Star right-hander Luis Severino.

Stott’s most impressive plate appearance might have come in the bottom of the fourth when he saw fastballs, sliders and splitters before taking a 97.7 mph fastball and walking against All-Star lefty Aroldis Chapman.

“That’s not an easy at-bat,” said manager Joe Girardi, praising the lefty-hitting Stott. “He’s looked good at the plate and he’s been consistent in the field. He’s picked up where he left off in the fall and all year long last year.

“I love the way he swung the bat. The one thing he’s done this spring that he didn’t last spring is relax. I just think the first time someone goes to big-league camp they try to impress you too much.”

Stott, 24, will likely start the season in Triple A, but he might not be there long.

READ: Kingery hits the road, hopes it leads back to the majors

Matt Vierling is another young player who shined Friday. The 25-year-old Notre Dame product is on track to be the opening day center fielder. In the minors, he was known for his big exit velocities. He smacked a three-run double to the wall in center in the first inning.

Vierling started in center field flanked by Kyle Schwarber in left and Bryce Harper in right. Sounds like the opening day outfield. Harper gunned down a runner at the plate. Schwarber made a nice running catch. Girardi has said he expects Schwarber to get most of the playing time in left field, but Nick Castellanos will play there, too. Castellanos will make his Phillies debut Sunday in Dunedin. He will play left field, Girardi said.

Dominguez, who had Tommy John surgery in the summer of 2020, has five strikeouts in two innings this spring. His fastball topped at 96.9 on Friday.

“He threw a ton of strikes, that’s what I like,” Girardi said. “It was really encouraging that the velocity didn’t drop off the second time out.

“I think any time you see really good things out of people you’re expecting (to contribute), it’s a good thing,” Girardi said. “And playing together is a good thing, too. As we move forward, with not many more games, we’ll start getting more of the guys together because they’re going to play more days in a row.”

Gibson allowed a pair of runs in his second spring start. He’ll get two more before starting the second game of the season.

The veteran right-hander likes the way the pitching looks on paper – starters capable of going deep into games, a bullpen that features some returning power arms and some veteran newcomers with track records.

“You’re seeing a pitching staff come together that hopefully on the front end we can bring a lot of consistency to the team and then on the back end you close the door,” Gibson said. “And in between (opposing pitchers) have to deal with an offense that’s pretty tough.

“If you talk to the guys in the rotation, we’re pretty excited about it.”