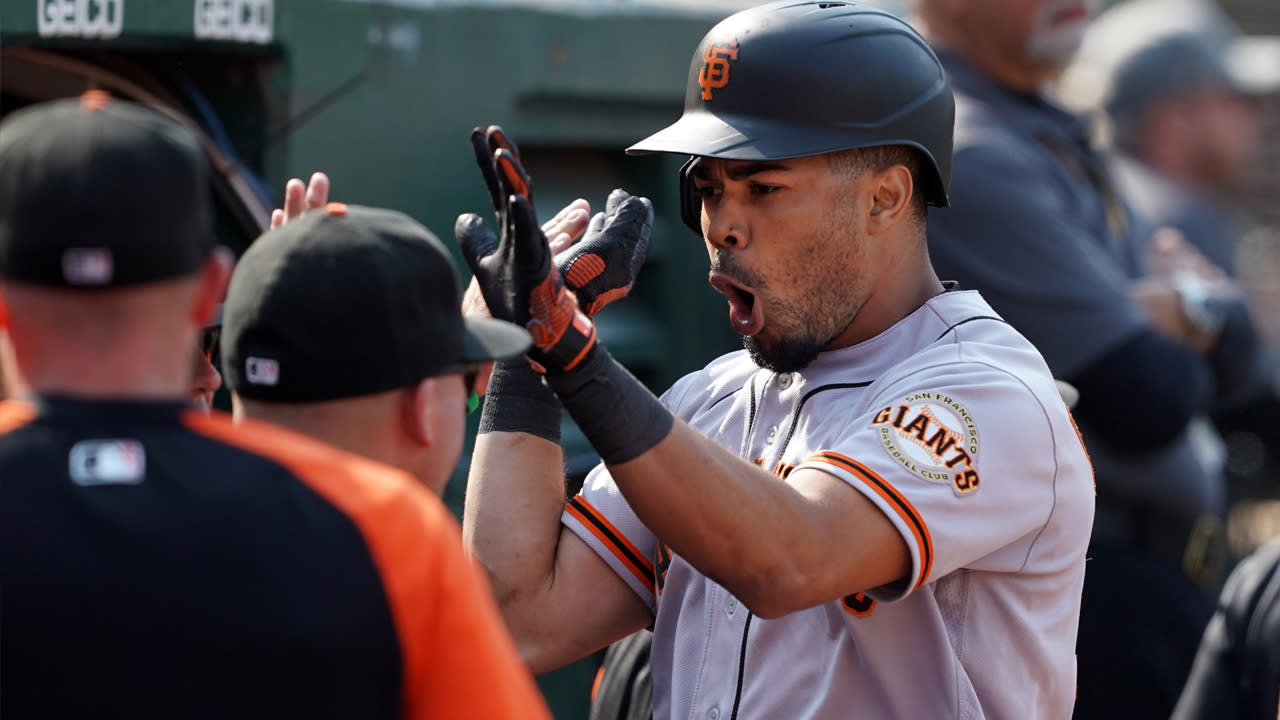 The visiting clubhouse in Oakland is so cramped that this weekend, while playing a three-game series against the Athletics, Giants coaches were forced to dress in an auxiliary clubhouse, one that required an elevator ride to a different floor of the Coliseum.

It is not a place that is particularly hospitable to visitors, but the Giants shook that off when they arrived. They were ready to adjust, and they also knew they had a secret weapon in countering the fact that players can’t do their usual hitting and warming up during games.

It’s that coaching staff, the one preparing for games in a different room.

LaMonte Wade Jr. was the hero on Saturday afternoon, hitting a two-run homer in the ninth inning that swung a game after 25 outs. The Giants beat the A’s 6-5, maintaining their lead in the NL West, and afterward, Wade was eager to spread the credit.

How is he so calm in the late innings? How does he keep coming through in clutch moments? Wade redirected a lot of the praise to Donnie Ecker and Justin Viele, two of the club’s hitting coaches.

“It’s trusting in J.V. and Eck and the plan that they give us,” Wade said. “Before that at-bat J.V. and Eck were in my ear, telling me what areas to look for, what pitches to look for. I give all the credit to them. Luckily I was able to run off the plan.”

It’s not that easy, of course. The Giants for two years have shown that they put a plan in place better than perhaps any team in the league, but you need the talent to pull it off, and you need players who don’t let their heart skip in those big moments.

Wade, after sitting all afternoon and waiting for his shot, blasted a Lou Trivino fastball just inside the pole in right, turning a 5-4 deficit into a win. He said he tried to stay “calm, relaxed” and “focused on putting together a good at-bat.” His manager knew he would.

“One of the reasons I like LaMonte coming up in a big moment like that, in a big pinch-hit spot, cold off the bench, is because of the way he leads off a game,” Gabe Kapler said. “He leads off a game ready from pitch one. It’s no fake discipline, it’s, ‘I’m looking for a pitch to drive and if I can’t get that pitch I’m comfortable taking it and getting to the next one.’ I think that’s also the way we want to approach pinch-hit at-bats.

“Obviously he’s been getting the ball in the air to the pull side all year. We’re just looking to keep the line moving there, pass the torch to the next guy, give somebody a chance to do some damage, and obviously LaMonte, we know he’s dangerous enough where he can put the ball in the seats like he did. But it really is about the mindset, and he takes that mindset up to the plate for every at-bat.”

It’s the mindset that Ecker, Viele and Dustin Lind want to see in all their hitters, which is why Wade was such a good and immediate fit after he was scooped up in a minor trade with the Twins.

Wade joined Brandon Belt, Darin Ruf and Kris Bryant in homering, with the first three keeping the Giants around on a day when they did very little right otherwise. The bullpen was fantastic, but Kevin Gausman struggled and didn’t make it through four, Wilmer Flores had a crushing error, and a couple of mistakes from position players led to an eighth inning that might have been the worst five-minute stretch of the season.

But none of that mattered in the end. Five minutes after the Dodgers won their ninth consecutive game, Wade hit his blast to right. The Giants know the Dodgers are coming hard, but Belt, who drew the walk that put the tying run on base, said the Giants don’t plan on going anywhere.

That was once again clear in the ninth. As the ballpark shook, Belt took a couple of steps out onto the field to make sure Wade’s blast stayed fair. He was waiting when the young outfielder got back to the dugout, but not with any particular message. Wade had heard all he needed to hear before his at-bat.

“I didn’t have anything to say to him,” Belt said. “I think he knows he’s a badass.”