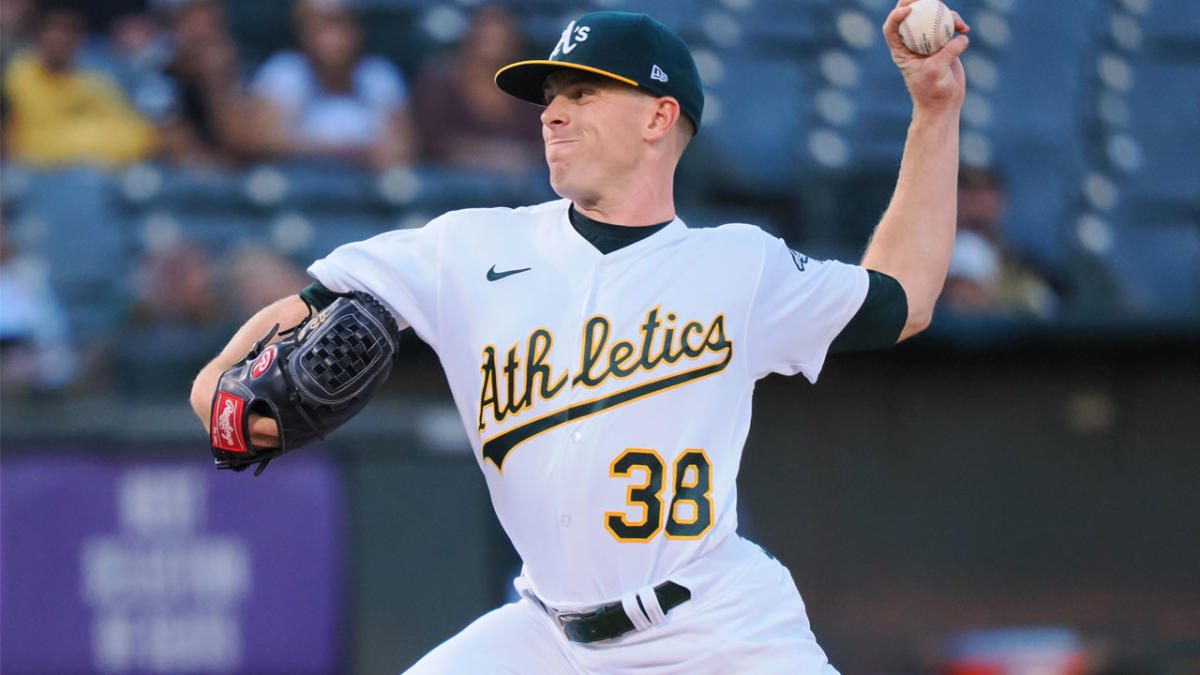 There were two silver linings in the Athletics’ 3-1 loss to the New York Yankees on Friday night at the Oakland Coliseum.

The first was starting pitcher JP Sears (L, 6 IP, 8 H, 3 ER, 4 BB, 3 K), who pitched well against his former team after being acquired by Oakland in the deal that sent starting pitcher Frankie Montas to New York before the MLB trade deadline.

In his four starts with the A’s, Sears has allowed just six earned runs over 21 1/3 innings pitched. He impressed manager Mark Kotsay with his outing Friday against a ferocious Yankees lineup.

“Sears’ outing was outstanding tonight,” Kotsay told reporters postgame. “He made one mistake to one of the best hitters in the game [Aaron Judge] and unfortunately, the result was a three-run home run … all in all, it was a good start for him.

“Demeanor, approach, mindset, competitor, that’s just what comes to the front of my mind. Nothing seems to bother him. He got [Giancarlo] Stanton to roll into a double play, he came off the mound a little emotionless but fired up once he got in the dugout. He carries himself like a veteran major league starting pitcher right now.”

Sears admitted after the game that there was no extra motivation facing his former team and that he treats each start the same way, regardless of whichever team he faces off against that day. However, the 26-year-old was excited to face off against one of the best teams in baseball.

“Definitely feel blessed to play against them,” Sears said. “The Yankees are a great team, they’re pushing (for a World Series) this year and it’s good to face the best, regardless if you used to play for them or not, it’s just fun to face good teams and compete against the best. It was a fun night.”

Offensively, the A’s bats were quiet for the first six innings against Yankees starter Gerrit Cole. That is, until rookie second baseman Jonah Bride launched his first major league home run in the bottom of the seventh to cut New York’s lead to 3-1.

For Bride, the home run not only was special because it was his first, but also because he knew that his late grandfather — a huge Yankees fan — was smiling down upon him.

“It was a cool moment for sure, to be off a guy like him,” Bride told reporters. “Getting that first one out of the way was special. My grandpa was a huge Yankees fan. He passed away when I was in middle school, it was a cool moment to think about. He’s up there watching for sure.”

Down two runs in the bottom of the ninth, the A’s scratched across another run and even brought the winning run to the plate before Yankees lefty Wandy Peralta shut the door. Kotsay believes Bride’s big home run was the spark that ignited the A’s late comeback attempt.

“Jonah actually got the offense going,” Kotsay said. “Obviously, we knew what we were up against tonight with Gerrit Cole. I think he leads the league in strikeouts and he had a lot of strikeouts tonight, but Jonah put a good at-bat together and got a breaking ball up in the zone and ended up getting a home run out of it, giving us some momentum and getting us back in the game.”

The A’s will use the remaining 35 games this season to allow youngsters like Bride, Sears and others to showcase what they can do at the major league level and audition for significant roles on next year’s team.

Friday night was just one example of the potential some of these young players still possess.

Brentford vs Everton, live! Score, updates, how to watch