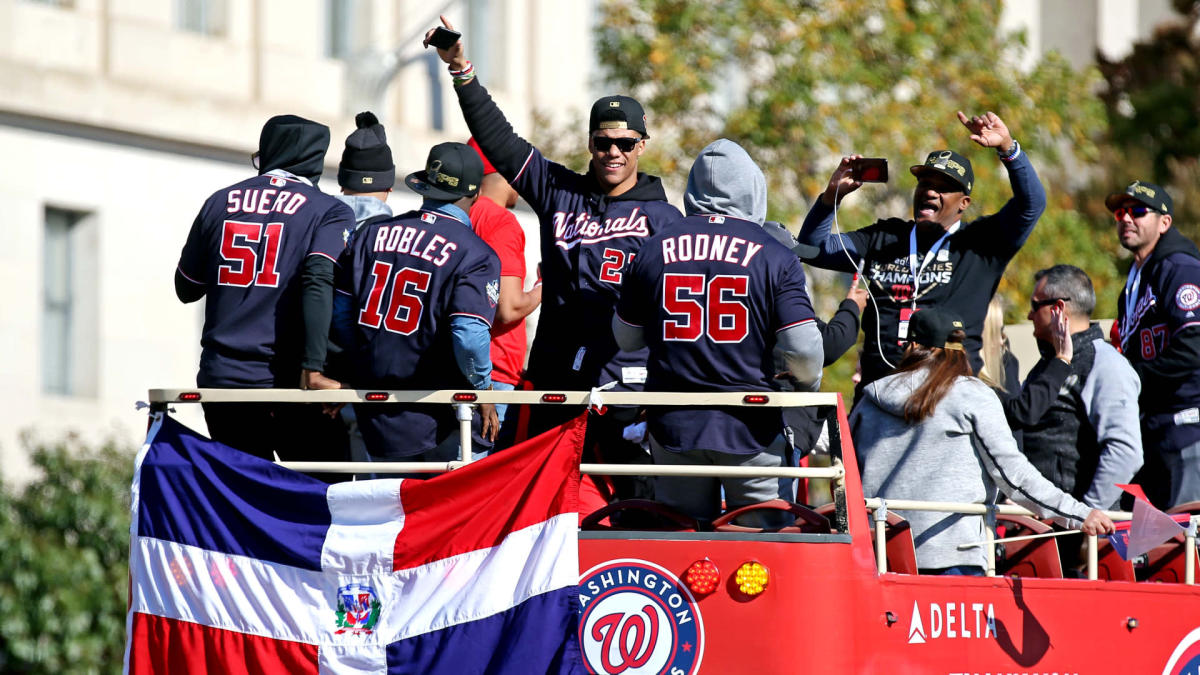 David Ortiz is a three-time World Series champion, seven-time Silver Slugger, 10-time All-Star, Home Run Derby champion and member of the 500 home run club. On Tuesday, the Baseball Writers’ Association of America announced that he would be adding Hall of Famer to that list of accolades after he was elected on his first ballot with 77.9% of the vote.

Among those celebrating Ortiz’s election was Nationals outfielder Juan Soto. Ortiz and Soto were both born in the Dominican Republic and the pair have spent lots of time together doing charity work in their native country. Soto congratulated Ortiz with a video on Instagram taken during a charity baseball game this offseason that benefitted Ortiz’s Children’s Fund.

Juan Soto congratulated David Ortiz for being elected to the Hall of Fame yesterday in an IG post, saying in Spanish that the fellow Dominican legend has been like a father to him. pic.twitter.com/glb9V4GT5F

Ortiz is the fourth Dominican player in MLB history to reach the Hall of Fame, joining Pedro Martínez, Vladimir Guerrero and Juan Marichal. Albert Pujols and Adrian Beltre are expected to make it in their first years of eligibility as well. Martínez had his hand on Ortiz’s shoulder when he received the news.

Soto is only four years into his own major-league career, but he’s already left quite the impression on Ortiz for his confidence at the plate.

Ortiz was an analyst for FOX Sports during the 2019 World Series and watched as the young phenom hit .333 with three home runs to lead the Nationals to a championship. However, there was one at-bat that stood out to him the most.

Hereâs a video that is going viral on r/Nationals right now (and thanks to my office Teams for sharing).

David Ortiz tells a story about Juan Soto right before he took Justin Verlander deep in Game 6 of the World Series. pic.twitter.com/w6kWCaySSs

The BBWAA elected only Ortiz this year with Barry Bonds (66%), Roger Clemens (65.2%), Scott Rolen (63.2%) and Curt Schilling (58.6%) all falling short of the necessary 75% needed. Bonds, Clemens, Schilling and Sammy Sosa (18.5%) were all in their 10th and final year of eligibility, meaning it’s now up to the Historical Overview Committee to decide whether they deserve a place in Cooperstown.

Ortiz will be inducted the weekend of July 22-25 at the Clark Sports Center in Cooperstown along with the six players elected by the Era Committees in December: Bud Fowler, Gil Hodges, Jim Kaat, Minnie Minoso, Tony Oliva and Buck O’Neil.

Next year, the BBWAA will see a slew of new candidates added to the ballot including Carlos Beltrán, John Lackey, Jayson Werth, R.A. Dickey, Jacoby Ellsbury and Matt Cain. Former NL MVP Jeff Kent will be the lone candidate in his final year of eligibility.