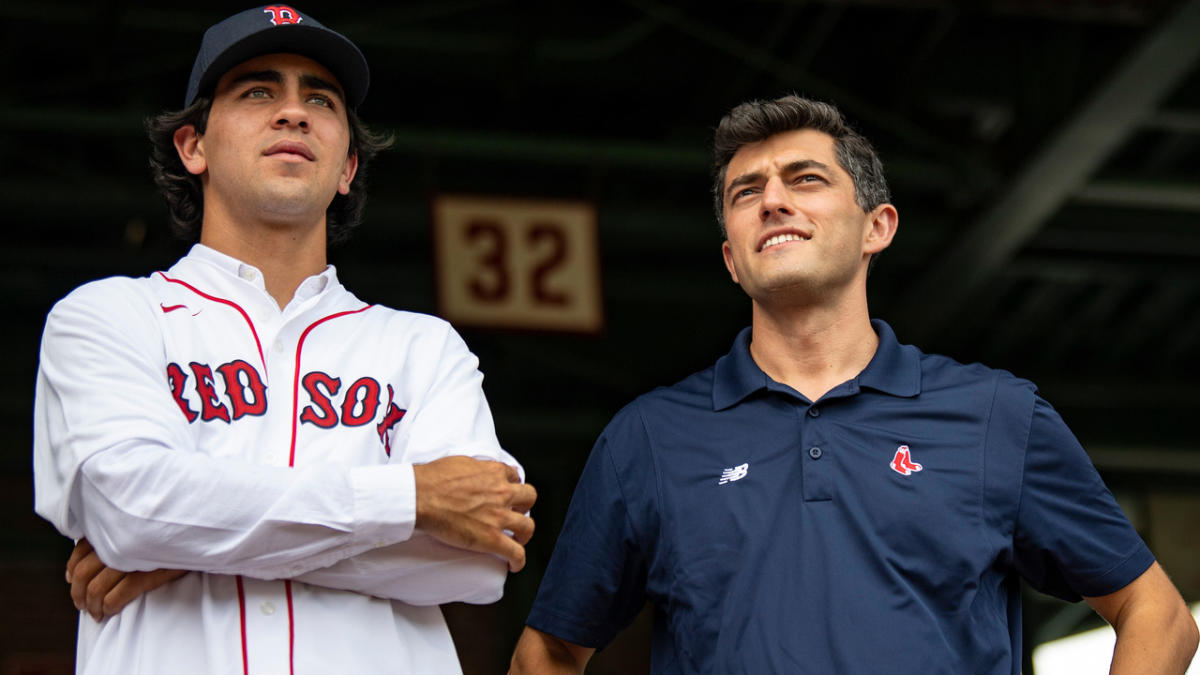 Brayan Bello clearly belongs in the big leagues. Triston Casas has enough power and plate discipline to merit a long look at first base. Ceddanne Rafaela probably isn’t Mookie Betts, but there’s at worst a super utility job in his future.

All are fine prospects who should contribute to the Red Sox in 2023. But when we talk about Chaim Bloom’s overhaul of the farm system, we’re really talking about one player: Marcelo Mayer.

Building out the middle of the roster with homegrown players is one thing. Producing franchise cornerstones is another, and as the Red Sox enter Year 4 of Bloom’s stewardship, that means Mayer.

Picked fourth overall in the 2021 MLB Draft, Mayer has done nothing to suggest the Red Sox whiffed on the selection. He’s a consensus top-20 prospect across the various rankings, placing as high as seventh (MLB Pipeline) and as low as 19th (FanGraphs).

He’s far and away the brightest star in the Red Sox system after hitting .280 with 13 homers between Low-A Salem and High-A Greenville. He was one of only a handful of teenagers in the South Atlantic League, where he posted an .828 OPS in 25 games.

Beyond the numbers is the projectability. Mayer arrived out of high school with a big league frame. Already listed at 6-foot-3 and 188 pounds, it’s easy to envision him one day resembling Twins All-Star Carlos Correa, a 6-foot-4, 220-pounder with rangy athleticism at shortstop.

The difference between Mayer and Correa is that the latter arrived in Houston with a posse. The Astros of the mid-teens were loaded with young talent, from Correa to center fielder George Springer to third baseman Alex Bregman. They joined future MVP Jose Altuve as the core of a lineup that won it all in 2017.

The Red Sox, for all their proclamations about building a better farm system, aren’t exactly awash in elite performers. They may boast a much stronger middle class than the one Bloom inherited from Dave Dombrowski — and there’s certainly value in that — but they don’t compare to their AL East rivals in terms of prospect rankings.

The Orioles, for instance, just graduated consensus No. 1 overall prospect Adley Rutschman to the big leagues, and he is the real deal. His arrival coincided with Baltimore’s ascension in the standings, and the switch-hitting catcher established himself in short order as a potential franchise player, producing 5.2 WAR in not even 400 at-bats.

He’s by no means alone. Rutschman’s arrival made shortstop Gunnar Henderson the No. 1 prospect in the game by some rankings. The shaggy-haired 21-year-old then followed Rutschman to the majors, which opened a spot for yet another Orioles farmhand, right-hander Grayson Rodriguez, to climb into the top five. That’s a pipeline.

Meanwhile, the Yankees have three prospects in MLB Pipeline’s top 50, led by shortstop Anthony Volpe (No. 5), while the Rays boast two of the top 35, and that’s after giving 21-year-old superstar Wander Franco an 11-year contract. As for the Jays, their best prospects are already All-Stars: catcher Alejandro Kirk, first baseman Vladimir Guerrero Jr., and shortstop Bo Bichette. None of them are even 25.

The Red Sox aren’t blessed with anywhere near that level of top-end talent. The electric Rafaela is their only other top-100 prospect, but he’s limited by his size and a lack of plate discipline. Nick Yorke, Bloom’s first draft pick, wildly exceeded expectations in 2021 and then badly underperformed them this year. The best long-term bet beyond Mayer is probably center fielder Miguel Bleis, whom Baseball America just named the No. 1 prospect in the Florida complex league. But he’s only 18 and has yet to appear in a full-season league.

That’s what makes Mayer so important. If he’s the heir apparent as a franchise shortstop, Red Sox fans will one day be able to accept whatever happens this winter with Xander Bogaerts.

If he’s not, then Bloom will have little to show for his hyper-focus on building the farm, especially with the Red Sox pulling back in free agency.

That’s a lot to put on one young player, but I suspect this Red Sox farm system will ultimately be judged on how far Mayer takes it.