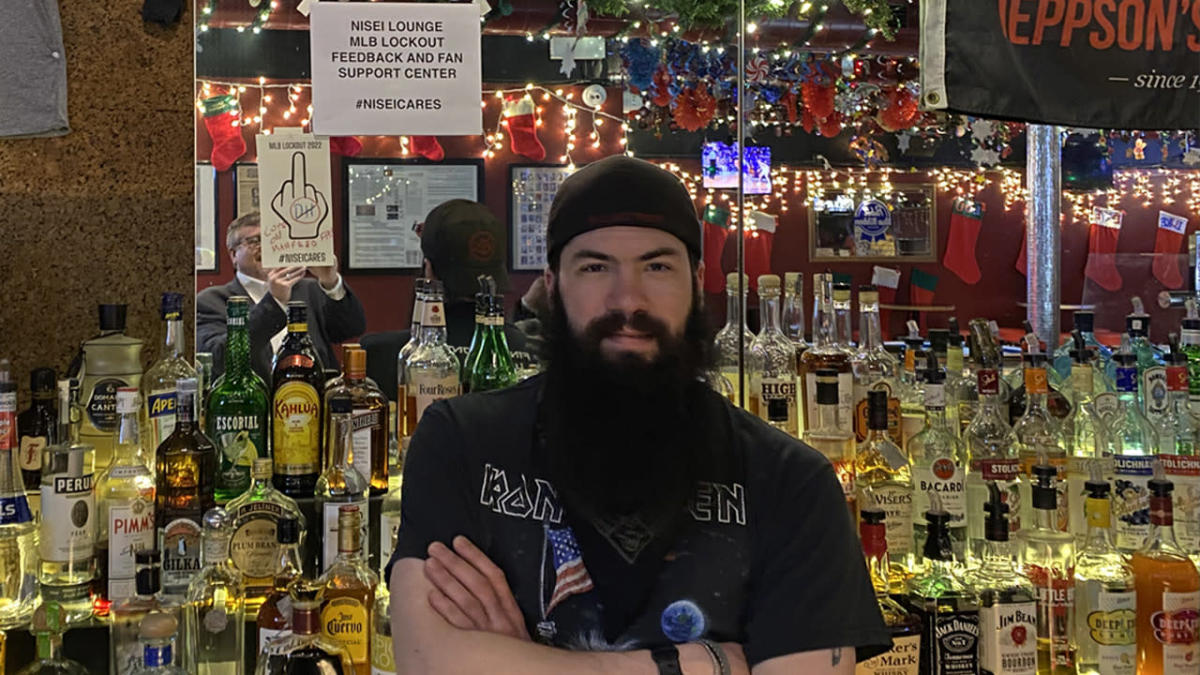 Barstools were stacked, and the lights were out, but a faint sign of movement in the back of the bar was visible through the window from Clark Street early Wednesday evening.

After some banging on the window, a man who identified himself as the bar’s owner opened the door. But he wanted no part of being interviewed about what kind of impact baseball’s labor shutdown following two years of pandemic-related losses might have on his business, which is about a Jason Heyward throw to the plate from Wrigley Field.

“How the hell does it look like it’s affecting us?” the owner said. “We’re closed.”

With that, he declined to talk further and went back inside the darkened room.

Baseball commissioner Rob Manfred’s announcement Tuesday that Major League Baseball has begun to unilaterally cancel games from the regular-season schedule ramped up the anger players and fans across the country already had for the unpopular commissioner and the league-imposed lockout.

But nowhere did the announcement carry more real-life impact and cut emotionally deeper than it did in neighborhoods like Wrigleyville, where dozens of businesses rely on the baseball season for most of their annual revenues — upwards of 70 percent of them, according to owners and operators of some of the neighborhood bars and restaurants.

“It’s like the pandemic is still going on,” Zach Strauss, the second-generation owner of iconic Slugger’s bar on Clark, said of his reaction to Manfred’s announcement. “In this neighborhood, in this business, we live and die by the Cubs season.”

In fact, Manfred’s announcement came one day after mask mandates were lifted for businesses like his.

Talk about an economic one-two punch.

“Coming out of the pandemic, we were anticipating having a decent year,” said Bobby Sdralis, whose father, Pete, founded Wrigleyville Dogs on Clark 31 years ago, “because we saw last year when they opened the stadium finally to full capacity in June, July and August there was a certain energy that hadn’t been seen since probably 2016, ’17. People were having fun, people were excited, everyone was optimistic finally.

“Now it feels like we’re back to square one.”

Strauss estimates that the Cubs’ 81 home dates account for about 75 percent of his business for the year.

And although only the first week of the season has been canceled so far, there’s little indication the owners and the union are close to an agreement to avoid losing more of the season.

In fact, reports Monday said MLB signaled to the union a willingness to cancel the entire April schedule. The Athletic subsequently reported that many local television rights deals don’t require rebates for missed games until about a month of games is lost.

“My biggest fear,” Sdralis said, “is if this [lockout] continues that the fan base …

He paused and sighed.

“That the fan base might not come back,” he said. “I’m not sure what the draw would be. How would you make baseball sexy again.”

It’s not exactly sexy now, he said, between the slow pace of games, historic lack of action with strikeouts and walks at all-time highs, and games often lasting 3 1/2 hours or more.

The last time labor issues shut down baseball — in 1994-95 — it was a years-long climb back to fans returning to the game in big numbers, driven by the steroid-fueled home run summer of Sammy Sosa and Mark McGwire in 1998.

That’s what brought Freddy Fagenholz back to the game as a fan in the neighborhood all those years ago.

These days, as the general manager of Murphy’s Bleachers on Waveland and Sheffield, Fagenholz wonders the same thing Sdralis does when it comes to the potential of a prolonged delay to the season and what that might do to fan traffic in the neighborhood even after a return.

“People aren’t happy. And if this goes longer than two weeks or a month, I think fans are going to end up doing something,” Fagenholz said. “Not showing up to games and boycotting baseball. I sure hope not. But no one has answers to these things.”

What he does know is that Murphy’s does about 70 percent of its business for the year during the baseball season, and after two years of pandemic-related losses neighborhood business are at especially high risk for a baseball stoppage.

Between pandemic forces and the winter slow season, that much is evident just by walking through the neighborhood on a midweek evening and seeing the large numbers of bars and restaurants that are closed. Some may not reopen under current or previous ownership, say some of their neighbors.

“When there’s 40,000 people across the street [for a game] and another 10,000 people walking around the area, that’s 50,000 people in the area going to bars and restaurants, spending money, buying clothes,” Fagenholz said.

Neighborhood businesses took a beating in 2020 with a short season and no fans allowed at games even when games began in July. And even last year, it was midseason before full capacity was allowed.

“Everyone hurts,” Fagenholz said. “The vendors hurt. The people that clean around the ballpark … it’s a trickle effect from the top to the bottom.”

And the further it trickles down, the more it hurts in many cases.

“It’s tough,” said Luke Mockaitis, one of the fortunate bartenders kept on staff at the popular Nisei Lounge on Sheffield during the pandemic when layoffs wiped out service-industry jobs nationwide.

“It’s hard to think about how long this could last,” he added. “Hopefully, we do see a season. It’ll definitely be shortened, but if we can get 100-and-some games in that’ll definitely help us. But anything less than that would be pretty rough.”

Mockaitis, who has a one-finger gesture for MLB printed and affixed to the mirror over his right shoulder as he pours a glass of scotch, said the local bar business is still very much reeling from pandemic, especially when it comes to the workers.

“We still have to worry about it,” he said. “We only just had the mandates lifted here in Chicago.”

Which was supposed to mean an even greater uptick in business with the baseball season, along with recovered income after the “dead months” of winter.

“As a bartender or somebody in the industry you have to save up as much money as possible ideally during those warm months to get you through the winter because business was so slow,” he said. “To then be at the end of the winter, with that light at the end of the tunnel and you’re like, ‘All right, baseball’s coming back, business is going to start picking up, I can start not having to worry about money anymore — to then just having that taken away. …”

Manfred at one point Tuesday was asked about stadium workers and service-industry workers impacted by his decision to cancel games and called them an “important part of the calculus for us and our owners,” saying he considers that among his priorities.

“I bet he does when he’s sitting on the golf course with his billions of dollars that he makes,” said Mockaitis, who called it “insulting” to watch that Manfred session with the media after MLB was able to bounce back so quickly from the pandemic last year.

“It’s just kind of insulting to society as a whole and the whole baseball community working in [the sport] or those who just follow it to watch that,” he said, “and [see] that they just clearly don’t care about anybody. They only care about their money, and they don’t want to pay anybody what they should be paid or take care of the people they should be taking care of.”

Sdralis, who said his father took no salary for seven months during the pandemic to keep staff who in some cases had been with the business for 25, pointed out that small businesses at least were eligible for paycheck protection program (PPP) funds during the pandemic.

“Baseball should probably give us some PPP money or something to that extent,” he cracked.

He blames both sides for this squabble and shutdown. And he wonders with the high price of going to games — especially at Wrigley — how many fans will be eager to shell out the bucks to return from a potentially steep loss of games.

“It’s probably cheaper to fly to Paris than to see a Cubs game against the Yankees at Wrigley Field sometimes,” he said. “Some of these owners and players forgot about the strike of ’95 and how mad and upset fans were. I know as restaurants and bars, I can’t forget that. I was probably 14, 15 years old when that happened. I hated that.”

He reiterated his skepticism that today’s un-sexy version of baseball would bounce back from a prolonged stoppage as it did before, which could mean long-term pain for local businesses.

“I sell hot dogs and hamburgers and gyro sandwiches,” he said. “I don’t do marketing for MLB, but whoever’s doing marketing for them is going to have a Herculean task ahead of them.

“That’s our family’s perspective. I’m sure my dad would add some other choice words. Something about “bums” but with a choice word in front of it.”