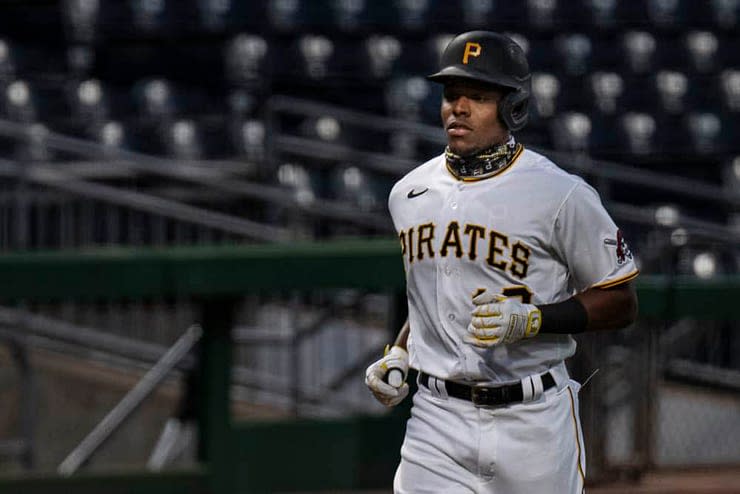 Monday, Aug. 23, brings a host of questionable talent taking the mound for six teams, which should create a raucous tournament environment. Let’s get into the top MLB DFS picks for pitchers and stacks for Yahoo, DraftKings and FanDuel daily fantasy baseball lineups.

This is a case of the irresistible force going against the immovable object but on the not-so-exciting end of the spectrum. Humberto Mejia is being called up from Triple-A to make Monday’s start against the Pirates. He made six starts in Double-A before moving up, and in 12 Triple-A starts he had nearly a strikeout per inning, though he did allow a 5.93 ERA.

The current iteration of the Pirates offense ranks in the bottom three against right-handed pitchers. While they strike out close to league average, they have horrible power numbers and are creating runs 19% less efficiently than league average. Lefties will be the first priority, with switch-hitting Bryan Reynolds ($17) followed by Colin Moran ($7), who has solid power against opposite-handed pitchers and is inexpensive. Either Ben Gamel ($9) or Yoshi Tsutsugo ($11) will be leading off, and that should be the tiebreaker. Gregory Polanco ($8) is the last of the lefties, and Ke’Bryan Hayes ($9) can be a mix-in as long as he has a favorable spot in the order. While the Pirates are not the fiercest group on offense, they will provide the salary cap freedom to do other things.

Daniel Lynch stymied the Houston bats in his last start, allowing one run across seven innings. It will be hard to trust him to duplicate this effort, however, as he survived three walks with the second-most ground-ball outs of his young career. The Astros are still the best offense in the league against southpaws, and they are creating 22% more runs than league average.

Even with Kyle Tucker in the health and safety protocol and Alex Bregman (quad) on the injured list, there are still plenty of hitters to target. The usual suspects are Jose Altuve, Carlos Correa and Yuli Gurriel, who should all be in the top half of the order. In his last 300 plate appearances against same-handed pitchers, Yordan Alvarez boasts a .370 wOBA and .250 ISO.

The bottom of the order provides some salary relief and differentiation on both the main and late slates. Chas McCormick was out of the lineup on Sunday with a sore hand, but it is not expected to keep him out of action for long. Aledmys Diaz, Jake Myers and catcher Martin Maldonado are deep cuts that not many gamers will chase. The Royals have a couple of lefties in the bullpen who have not pitched recently, so there is a chance the bottom of the order can get an extra at bat with the platoon advantage depending on what Royals manager Mike Matheny chooses to do.

It looks like the decision point for the top pitching option of the slate comes down to veteran Lance Lynn and rookie Alek Manoah. The slight edge goes to Lynn, as it is hard to trust even a talented rookie against a nearly full-strength White Sox offense that is now missing only Yasmani Grandal. Toronto is likely to roll out a mostly right-handed lineup, and over his last 400 same-handed matchups, Lynn has a 29% strikeout rate. Additionally, his 2.26 ERA and 1.07 WHIP would be top-five marks among starters if he had enough innings to qualify. By no means is this an easy or even safe matchup, but Lynn has the mantle of top pitcher on Monday’s slate.

The Rockies are the worst team in the league against right-handed pitching, with a 76 wRC+. Kyle Hendricks leads MLB with 14 wins, and he is second with 18 quality starts. While it is not spectacular, his 4.04 ERA ranks 32nd among starters, and in his last 18 outings he has suffered more than four earned runs only twice. Colorado has managed to score just 11 runs in their last six road games.

In their three-game weekend series with the Royals the Cubs managed just five runs. This was against subpar starters Brad Keller, Kris Bubic and Carlos Hernandez. Next up is Antonio Senzatela, who is about the same caliber of the Kanas City trifecta, and his ground-ball ways have aided his cause despite Coors Field being his home park. Only twice this season has Senzatela allowed more than four runs, and Chicago has scored more than four runs just five times in its last 18 games. This is not an exciting pick, but as a second pitcher on Yahoo and DraftKings, it is an interesting one as long as Senzatela does not pick up a lot of traction once the DFS echo chamber gets fired up.

The pitching on Monday’s slate has a lot of question marks, as do a lot of offenses. This is going to be a fun strategy, AKA game theory slate, where gamers need to embrace the variance inherent with MLB DFS.

Arteta under pressure to lead Arsenal out of the wilderness

What did Shohei Ohtani do this week? Hit his 40th homer while pitching a gem