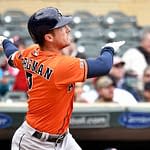 Saturday marks the 34th start of Kolby Allard’s career, and the 16th this season. It has been covered many times in this article series this season, but rolling with Houston against lefties is a savvy move more often than not. Currently, the Astros lead the league with a 121 wRC+ against southpaws, which means they are creating runs 21% more efficiently than league average.

On the season, Allard has ceded 1.89 home runs per nine innings. Over his last three games, he has been playing with fire, allowing a pair of home runs in each appearance, though in that stretch he allowed only eight earned runs. In his five July starts, he was saddled with a 9.13 ERA, so we know that opposing batsmen can put up crooked numbers in a hurry.

The Yahoo salary algorithm seems to be a big believer in Allard, as they are giving us a nice discount on most of the Astros. Jose Altuve ($15) has been slumping at the plate so he received a day off on Friday to “clear his head,” but is expected back in his customary spot at the top of the order on Saturday. Yordan Alvarez ($19) has been equally adept at crushing both righties and fellow lefties throughout his career. Alex Bregman ($18) is back from his quad injury and should be in the heart of the order along with Carlos Correa ($18).

At the bottom third of the order, we should see Yulieski Gurriel, who is leading the American League with a .315 average and second overall. Kyle Tucker ($20) is commanding a hefty salary, which should keep his popularity in check and in his last 200 matchups against same-handed hurlers he has tallied a .200 ISO. Jake Meyers ($15) is a solid differentiation play as is Martin Maldonado ($10) if he draws the start with a southpaw on the mound. Finally, Aledmys Diaz ($14) is a reasonable option if he is in the lineup as Houston plans on using him around the infield to give the regulars days off down the stretch.

Detroit is slated to roll out a combination of Jose Urena followed by southpaw Tyler Alexander. Urena has been out since mid-July with a strained groin. Neither of these pitchers is particularly intimidating, so we can freely look to the Blue Jays up and down the order. DraftKings and Yahoo did a nice job with the salaries for Vladimir Guerrero Jr., Marcus Semien, Bo Bichette and Teoscar Hernandez, so The Masses are not likely to assemble many stacks with that core four. George Springer and Cavan Biggio are still on the injured list, so the rest of the Toronto bats are coming at a discount on most sites. Outfielders Lourdes Gurriel and Randal Grichuk are solid against pitchers of both handedness, so they are the primary targets from the back of the order.

It has not yet been decided if Ryan Weathers will work after an opener or be the actual starter, but he should be in line for around three or so innings depending on how far his 70 to 75 pitches take him. Aside from the amazing Shohei Ohtani, the Angels are not particularly exciting, though we have only four teams in our late-slate player pool. Justin Upton is still has above average power as he wraps up his 15th MLB campaign, particularly against lefties. Jared Walsh is the next best hitter and the youngster has been productive against same-handed hurlers. Beyond that targeted trio, Max Stassi is really the only other interesting option, though even if he is in the lineup, he may not be close to the others — unless of course he is batting eighth or ninth in the order and Ohtani is leading off, then we can employ a “wraparound” stack for some extra synergy while knocking out our catcher requirment.

Framber Valdez has not allowed a home run in his last six starts and he has allowed just seven over 98innings this season. Picking on the Rangers has become a way of life after the trade deadline, and with the roof scheduled to be closed in Arlington, that is just icing on the cake. Texas has an 80 wRC+ this season against lefties, which is the second-worst mark in the league and means it is scoring 20% less efficiently than league average against southpaws. While the Rangers are only striking out 21.1% of the time, they have a league worst .123 ISO. For perspective their active roster has just 28 home runs against lefties and they are getting just over two per 100 at-bats.

This season has been a special one for Lance Lynn, who is second in the league with his 2.20 ERA and 12th with a 1.05 WHIP. Lynn has allowed more than three runs only twice this year through 23 starts. Though the Cubs plated 13 runs on Friday and 10 on Wednesday, that is, by far, the exception and not the rule. In the 10 games prior to that, they were averaging just 3.5 runs per game. Their current lineup has a league leading 25.8% strikeout rate against right-handed hurlers with bottom-seven power and scoring metrics. Enjoy!

The afternoon slate brings us a couple of options with rookie Alek Manoah taking on the Tigers in Detroit and Kyle Gibson hosting the Diamondbacks. While they are fine options, Nathan Eovaldi gets the nod as the top pitcher. In his last three starts, Eovaldi has allowed three solo shots, which account for the only runs he has given up. His 3.72 ERA is nearly half a run below his career average and he is still striking out a batter per inning. Ideally, he can limit the damage inflicted by Jose Ramirez and Franmil Reyes and then take advantage of the rest of Cleveland’s anemic lineup.

Saturday should be a fun one as we have a robust six-game afternoon slate followed up by a nine-game main slate. College Football is just getting underway and then next weekend is Labor Day so before we know it, football will be front and center. Enjoy these last few days of baseball taking center stage.