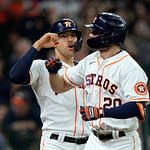 Saturday, Sept. 18, has a solid six games in the afternoon, rounded out by a seven-game main slate. Let’s get into the top MLB DFS picks for pitchers and stacks for Yahoo, DraftKings and FanDuel daily fantasy baseball lineups.

Tonight 23-year-old Humberto Castellanos will be facing the team that unceremoniously released him last year after a disastrous debut in The Show. Castellanos had decent strikeout stuff in the low minors, but that did not continue as he moved through the ranks while still allowing a lot of power, including nearly two runs per nine innings at Triple-A. Seattle, of all teams, rolled him in his last two starts notching three home runs and eight earned runs in only nine innings.

Yordan Alvarez ($19) leads the way as the top option for Houston. Last night, he was given a break, though he did enter the game as a pinch-hitter down the stretch. Carlos Correa ($18), Alex Bregman ($20) and Jose Altuve ($18) are not going to break the bank, which means they will also be popular.

For differentiation, we can roll with Kyle Tucker ($26), who is the second-most expensive hitter on the slate. This season in 327 opposite-handed matchups, Tucker has posted a .393 wOBA and a .262 ISO. That is very impressive when compared to Alvarez, who has a .365 wOBA and .262 ISO in 306 plate appearances against righties. Yulieski Gurriel ($15) also gets yet another mention as he has four multi-hit games in his last six starts and is seventh in the league with a .313 batting average.

Why yes, we are going to want to take on rookie Zac Lowther on the early slate. There is no “K” in his name and no “K” in his game. Okay, so that is not entirely true, as Lowther actually led the Orioles farm system back in 2019 while pitching for Double-A Bowie. The pandemic shortened season last year meant that Lowther did not get a chance to move up to Triple-A until this season. He actually pitched in all four minor league levels this season as he has been moved up and down from the big club. Lowther is a top-25 prospect in the Orioles’ system and while his fastball sits around 90 mph, he does have a unique left-handed delivery, which should keep him in The Show as a reliever for the next half decade at least.

Lowther does not tend to fare well his second time through the lineup, as hitters have had a chance to calibrate to his delivery. Once Lowther gives way to the overworked Baltimore bullpen the fun will really begin. Hunter Renfroe, Enrique Hernandez and Bobby Dalbec are the trio to target as they have all had great success against southpaws. Stalwarts Xander Bogaerts, Rafael Devers and J.D. Martinez, of course, are the obvious options. Kyle Schwarber is actually a nice differentiation option. He should be near the bottom of the order as a lefty, however, the Orioles freshest arms are all righties, so that bodes well for Schwarber getting the platoon advantage after his first at-bat.

While Daulton Jefferies is the starter and a top three prospect in the Oakland organization, they have been content to just ease him into things keeping him around three innings. That means we should see a healthy dose of the A’s bullpen and with both of their lefties having seen recent action, we are likely to see their right-handed relievers tonight. That bodes well for Jared Walsh, who has quickly become a dependable power bat and Angels fans should be thrilled next year when he slots in with Mike Trout and Anthony Rendon along with Shohei Ohtani. Rookie Brandon Marsh and his wild beard have a strong chance of leading off and while the rookie only has two home runs in 185 at-bats, he does have gap power and the potential for extra-base hits as well as being a threat to steal.

Ohtani continues to impress and, of course, he is a phenomenal option on all slates, even with his lofty salary. Max Stassi is a fine option at catcher tonight and Jack Mayfield is near the minimum salary on every DFS site to round things out.

This is a very straightforward recommendation tonight for Corbin Burnes, who has posted a top two 2.25 ERA, 0.91 WHIP and 12.4 strikeouts per nine innings. While wins are incredibly fickle to predict, Milwaukee is currently sitting as 3-to-1 favorites against Chicago. The Cubs projected lineup has a 26.8% strikeout rate against right-handed hurlers and that does not include their pitcher.

Arizona has the second-worst offense in the league against righties with an 80 wRC+ indicating they are creating runs 20% less efficiently than league average. Over his last 800 batters faced, Lance McCullers has a 54.9% groundball rate with a hefty 28% strikeout rate, both of which are elite numbers and a rare combination. The DFS salaries seem to be missing the boat today making McCullers one of the core pitching options in all formats.

This recommendation is not for the faint of heart by any stretch of the imagination. However, in tournaments, Yusei Kikuchi is intriguing for his salary relief. There are a lot of excellent pitchers on the docket tonight, however, Kikuchi does have upside that can come reasonably close to those aces. In his last eight starts he has 18-plus DraftKings points in four, though he also has gone negative twice. Though the Royals projected lineup has just a 17.8% strikeout rate against southpaws, they also have an anemic .118 ISO, which plays into Kikuchi’s favor.

While there is not any particularly threatening weather, we do need to keep an eye on the games in New York, Washington and San Francisco. Both of the slates today are loaded with top end pitching options along with several offenses poised for big games making for a thrilling tournament environment.