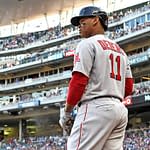 Today the Yahoo salary algorithm has made things interesting by goosing the cap hit for lefty mashers Hunter Renfroe ($25) and Bobby Dalbec ($27). These lofty tags are going to keep the masses at bay, which provides built-in differentiation inside of what is likely the most popular stack of the day. Xander Bogaerts ($19), J.D. Martinez ($19) and Enrique Hernandez ($17) will be the popular targets at the top of the order. Skipping one of them and pivoting to Rafael Devers ($17) in the lefty/lefty matchup will create a more unique stack. Kyle Schwarber ($21) is also an option, as Fernando Abad is the only lefty reliever for the Orioles, and he is unlikely to see action today after 25 pitches Saturday afternoon.

It has been a rough debut season for rookie Jackson Kowar, who is a top-10 prospect within the Royals farm system. Between three outings in June and another three in September, Kowar has worked a combined 18 innings with an unsightly 11.50 ERA and 15 walks.

Mitch Haniger continues to rake, and Kyle Seager is in the midst of a career year. Abraham Toro is a solid switch-hitting option in the middle of the order, and for a full stack, look to Jarred Kelenic or Jake Fraley, depending on where they are in the batting order. The Kansas City bullpen has had to clean up a lot of innings over the last three days, with only Ervin Santana and Scott Barlow escaping the carnage. That righty duo is likely to be the first ones called to action as soon as Kowar hits the showers.

Gerrit Cole shut down the Orioles, allowing just one run over five innings and striking out seven over 108 pitches in his last appearance. That alleviates concerns about his sore hamstring that cut short his start against Toronto. Cole is on the short list for the American League Cy Young Award, and he has allowed two or fewer runs in eight of his last 10 starts. Jose Ramirez and Franmil Reyes are the only worrisome hitters between Cole and another stellar performance.

The Red Sox are 3-to-1 favorites to garner the victory this afternoon against Baltimore. This has been a banner year Nathan Eovaldi who has been the de facto ace for Boston while Chris Sale has been regaining his sea legs. Over his last seven starts, Eovaldi has allowed just nine runs in 42.2 innings. In this stretch he has a 1.90 ERA and a whopping 11.8 strikeouts per nine innings.

The wild card aspect of this recommendation is the concern that Sandy Alcantara will have to be nearly perfect to account for his lofty salary. In seven outings since a crushing defeat in Coors Field where he allowed 10 runs, Alcantara has been excellent. In this stretch he has worked 52.1 innings, with just a 1.55 ERA and a .175 batting average against. Even if the roof is open today in Miami, the Pirates offense is bringing very little power upside. There should be enough discount dandies available to facilitate a double-ace roster construction on Yahoo and DraftKings today.

While all eyes will be on the NFL, there are still baseball contests to satiate fans. Weather should not be an issue, so that is one fewer variable to worry about.

Nightengale's Notebook: Pushing for playoff spot, St. Louis Cardinals were 'waiting to bust out all year'