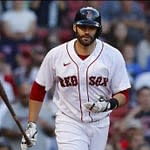 Wednesday, Aug. 25, has a 10-game main slate that is once again frontloaded. Tonight there are eight games in the first hour and then two in the second. Let’s get into the top MLB DFS picks for pitchers and stacks for Yahoo, DraftKings and FanDuel daily fantasy baseball lineups.

The addition of Kyle Schwarber ($25) has dramatically improved the Boston offense, and on tap Wednesday is a matchup against rookie Bailey Ober. Like most rookies, Ober has had his ups and downs this season, though he has a relatively solid 4.63 ERA over his last 10 starts. On the season he has a strikeout per inning, but he has allowed just shy of two home runs per nine innings. This production has come from both sides of the plate, with righties posting a .248 ISO and lefties just behind at .238.

Aside from Schwarber, the rest of the Red Sox have reasonable salaries on Yahoo for this matchup. J.D. Martinez ($13) is an absolute steal, while Rafael Devers ($18) and Xander Bogaerts ($18) are coming at a 15% discount. Alex Verdugo ($15) has been phenomenal, with a .375 wOBA and a .200 ISO in his last 350 lefty/righty matchups. For additional differentiation, Hunter Renfroe ($18) has excellent power, and this salary is going to keep the masses at bay.

Luis Castillo will be facing the Brewers for the sixth time this season, and he has held Milwaukee in check, though at some point that could easily come crashing down. With Brandon Woodruff and Walker Buehler the other two pitchers on the two-game late slate, by process of elimination, Blake Snell is the odd man out. There is a slim chance that Yu Darvish will slot in tomorrow coming off the injured list, and in that event, load up on the Dodgers lefties.

This series will mark the fourth time this season that Snell has squared off against Los Angeles. Through his 15.1 innings he has 19 strikeouts, but the seven walks are concerning. Over his last five starts, Snell has one negative fantasy outing, one 13-strikeout, seven-inning shutout and three above-average games.

Trea Turner has been excellent against southpaws, with a .464 wOBA and 300 ISO. While he does have a .400 BABIP in this timeframe, even at 75% of this production he would still be elite. Justin Turner, A.J. Pollock and Chris Taylor all have ISOs over .220+ against lefties over the last two seasons. Now, this does not mean flock to full stacks of the Dodgers, but it does show that they have a very deep lineup. Even Max Muncy and Corey Seager have .230-plus ISOs in lefty/lefty matchups over the last two seasons.

There is no salary break for Walker Buehler on Yahoo and FanDuel, though anytime he is below five figures on DraftKings that should be considered a deal. Buehler leads the league with his 2.11 ERA, and he is third with a 0.93 WHIP. The most impressive statistic from Buehler is 22 quality starts in 25 appearances. Though the Padres are easily a top-10 offense, so the 3.8 implied run total shows how effective Buehler has been this season. The only knock against Buehler is that he falls just shy of 10 strikeouts per nine innings, which is generally the minimum for true top ace consideration.

Shohei Ohtani has allowed two or fewer runs in 15 of 18 starts. While his 100 innings is not enough to qualify for the leaderboard, his 2.79 ERA would be just inside the top 10, and his 10.8 strikeouts per nine innings and 1.06 WHIP are both top-15 marks. Baltimore is below average against right-handed pitchers in most categories, but they are well above the dregs of the league. It is going to be a warm one in Camden Yards, but the Yahoo and DraftKings salaries make Ohtani a strong lead pitcher in tournaments and an excellent second pitcher on those sites.

Rookie Josiah Gray was the crown jewel in the Trea Turner and Max Scherzer deal with the Dodgers. In his four starts for Washington he has a 2.86 ERA across 22 innings. The one concern is all seven of his earned runs have been via solo shots. The opponents have been Philadelphia, Toronto and Atlanta twice, which is quite the gauntlet. The Marlins do not have any standout home run hitters, though Jesus Aguilar, Jesus Sanchez, Jorge Alfaro and Jazz Chisholm have gap power.

Tonight’s slate is frontloaded and has a lot of even matchups. There are not too many dominant pitching matchups, and it is a stretch to call out more than a handful of above-average stacks. With so many teams in action, there will be many viable roster construction strategies.