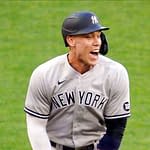 Wednesday, Sept. 1, has an enticing nine-game main slate with several top-tier pitching options throughout the night. Let’s get into the top MLB DFS picks for pitchers and stacks for Yahoo, DraftKings and FanDuel daily fantasy baseball lineups.

It looks like rookie Packy McNaughton draws the unenviable task of taking on the Yankees in an afternoon game at Angel Stadium. This will be the first start for him, though he did pitch 4.1 scoreless innings on Friday as a bulk reliever against the Padres. With a fastball barely in the 90s, McNaughton profiles as a crafty lefty who will be best served as a multi-inning reliever.

New York is in a nice position today, as McNaughton is unlikely to dazzle anyone with his heater. Joey Gallo ($15) is a prime target in this lefty/lefty matchup, with a .251 ISO in his last 261 opportunities. Two-time batting champion D.J. LeMahieu ($14) is a steal at the top of the order and all but assured of five plate appearances leading off. Luke Voit ($17) is another top-end option at today’s salary, and he is brushing up against a .250 ISO against lefties over the last two seasons.

Aaron Judge and Giancarlo Stanton are the obvious core options. For additional savings and differentiation, Kyle Higashioka should see the start at catcher, and Andrew Velazquez is likely to be manning shortstop. They are both available at the $7 Yahoo minimum salary.

Wednesday marks the 34th career start for Mitch Keller, who has been an absolute abomination this season. In 17 appearances he has a 6.75 ERA and a 1.81 WHIP. Only twice has he made it beyond the fifth inning, and even then it was for one and two outs. All told, he is someone to target with the White Sox.

This iteration of the Chicago lineup is a sight to behold now that everyone is healthy. Yasmani Grandal is back in full force after missing nearly two months, and he has home runs in each of his last two games and four total in his four outings since his return. While he is one of the most expensive batters tonight on Yahoo ($25) and DraftKings ($5,500), he is an absolute steal on FanDuel ($2.800) where gamers are loathe to roster catchers in the utility slot.

Jose Abreu has mashed same-handed pitching for years, and gamers can surround him with Luis Robert, Yoan Moncada and Eloy Jimenez at the top of the order. Towards the bottom, Brian Goodwin is a nice salary saver and can be mixed in with the middle-of-the-order options or at the top of a bottom-third stack with Andrew Vaughn, Leury Garcia or Cesar Hernandez to save salary.

With just two games on the late slate and a pair of righty aces in Max Scherzer (2.51 ERA) and Kevin Gausman (2.49 ERA), Brett Anderson gets the slight nod over Max Fried (3.54 ERA) as the lefty play. In 20 starts this season he has a 4.27 ERA and has allowed four runs three times and six runs once. It is nearly impossible to go home run hunting against him, as he has ceded just three in his last 13 starts.

The best bet will be to look to some of the righties in the San Francisco lineup. Buster Posey and Kris Bryant are the obvious choices, but staying away from them will garner differentiation. Darin Ruf, Austin Slater and Wilmer Flores are the three to target, though they will be spread out in the lineup. Brandon Crawford and Brandon Belt do well in same-handed matchups, so do not let the lefty/lefty situation dissuade. Selectively choosing a couple Giants and a power bat or two against Scherzer should be enough to get unique lineups in late-slate tournaments. In a scenario like this, do not be afraid to take a batter or two against rostered pitchers as well since most gamers will be hesitant to attempt that strategy.

Pittsburgh’s 78 wRC+ is tied with Texas for the worst in all of baseball. While the Pirates are not striking out a lot (22.6%), they rank in the bottom three from a power perspective. Carlos Rodon is having remarkable year, and his 2.43 ERA and 0.97 WHIP would both be top-five marks among starters if he had enough innings to qualify. Saving the best for last, his 12.79 strikeouts per nine innings would lead the league by just over half a strikeout.

Gerrit Cole’s salaries are high industrywide, but the low implied run total for the Angels is a nice indicator for how the prognosticators see this game unfolding tonight. In his last three starts, Cole has allowed just one run over 17.2 innings, a solo shot to Justin Upton. In addition to the Angels, he faced the Athletics and Twins in this stretch, racking up 24 strikeouts and under one baserunner per inning. As long as he is able to work around Shohei Ohtani and Jared Walsh, he should be in line for another strong performance.

Rookie Joe Ryan is on track to make his debut tonight against the Cubs. He was the key player received in return for Nelson Cruz at the deadline. Ryan is fresh off a solid showing in the Olympics, and he has steadily worked his way up through the farm system with success at each level. The Cubs are a bottom-five offense by most traditional and advanced metrics, and the DraftKings salary leaves a lot of margin for error. That is the only DFS site that has made Ryan available in the player pool, so be on the lookout if Yahoo and FanDuel add him at what would likely be near the minimum salary for those respective sites.

With two games already canceled in Washington and New York as the remnants of Hurricane Ida work up the East Coast, the rest of the schedule looks to be free from precipitation risk.

Pulisic stays in Nashville, will miss US qualifying opener

Fantasy Basketball: Don’t worry about these seven players — yet