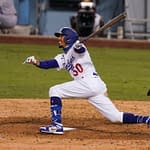 Wednesday, Sept. 15, opens with a four-game early slate leading to a 10-game main slate with some gigantic tournaments. Let’s get into the top MLB DFS picks for pitchers and stacks for Yahoo, DraftKings and FanDuel daily fantasy baseball lineups.

Cleveland stacks should always start with Jose Ramirez ($27) and Franmil Reyes ($21), who are by far the most productive members of the offense. Amed Rosario ($17) has been quietly racking up the production, and while he is not a threat for extra-base hits, he has been consistent, with a .311/.331/.463 triple slash since the beginning of August. Rolling with Rosario or Myles Straw ($18) at the top of the order with Ramirez and Reyes will create added synergy and differentiation, with so many other flashy alternatives on the 10-game slate.

The Brewers pick up the designated hitter in this game against rookie Matt Manning. Detroit is limiting the workload for Manning and fellow rookie Tarik Skubal, but they are not shutting them down. Instead they have been giving them extra time between starts and generally pulling them at the first sign of trouble.

The hope is that the youngsters will get used to the long grind of the season while going through the starting process but keeping them out of harm’s way by limiting their innings. Over his last six starts, Manning has pitched six innings twice, and then only once in the other four has he even been on the mound to start the fifth. In these six outings, he has worked 27.1 innings, posting a 6.91 ERA, 6.3 strikeouts per nine innings and allowing four home runs. The Detroit bullpen is not particularly intimidating, and it has endured a heavy workload since the All-Star break.

Manning has allowed power to batters from both sides of the plate, so there are a variety of options from Milwaukee to target. Omar Narvaez and Dan Vogelbach bring a lot of power and reasonable salaries in the back half of the order. Jace Peterson and Luis Urias should also be in adjacent slots in the order, providing a discounted quartet with differentiation.

Looking to the top of the lineup, Kolten Wong, Edwardo Escobar and Avisail Garcia are the trio to target. All have had sustained success against right-handed pitchers. For further differentiation, skip Christian Yelich, who is still mired in mediocrity. Instead go with Narvaez for a full stack. Yelich won the batting title in both 2018 and 2019, though in the two seasons since he has a triple slash line of .235/.361/.397. Even worse is his 27.3% strikeout rate, which makes Vogelbach look like a disciplined hitter.

Merrill Kelly has been out for the last month with COVID-19, and when he last pitched in mid-August he was shellacked by the Giants. This is an “out of the frying pan and into the fire” matchup, having to go against the Dodgers in Chavez Ravine. Kelly has actually had five of his better outings this season against Los Angeles and San Diego. However, this is likely not sustainable given his track record.

The Dodgers lineup is loaded even with A.J. Pollock out with an injury, and Gavin Lux, Cody Bellinger and Chris Taylor are taking turns rotating through the bottom two spots of the lineup. Mookie Betts is leading off, followed by Trea Turner, then Max Muncy, Justin Turner, Corey Seager and Will Smith in the heart of order. It is hard to go wrong with the Dodgers, and their depth provides plenty of paths to mix and match based on positional needs and salary constraints.

Arizona is better against lefties than righties, but Julio Urias is on the short list for the National League Cy Young Award. Urias leads MLB with 17 wins while posting a top-12 2.98 ERA and 1.03 WHIP. The Dodgers have their eyes on a deep postseason run, and while they generally keep Urias around 90 pitches, he has been efficient and effective enough to close out the fifth inning in 27 of 28 starts.

After missing three months with a fractured hand, Huascar Ynoa picked up right where he left off. In 97.1 innings he has a 3.22 ERA and 1.00 WHIP, which would both be top-15 marks if he had enough innings to qualify. The Rockies have a dismal offense, and while it is no surprise how bad they are away from Coors Field, they are also the worst team in the league against right-handed pitchers.

The Cubs’ is not a deep lineup by any stretch, but they are better against southpaws and have Willson Contreras back. However, the bottom half of their order is not even replacement-level talent, and this has Ranger Suarez on the short list for discounted pitchers on DraftKings. The Cubs have a 25.3% strikeout rate against southpaws, which is the third-highest mark in the league, along with middle-of-the-pack power. Since moving into the rotation, Suarez has logged a 1.67 ERA, 2.60 FIP with no home runs and nearly a strikeout per inning over 37.2 frames. He will give up a home run at some point, but those are some gaudy numbers, and he has a terrific matchup on the docket tonight.

The main slate is loaded with pitching tonight, and Jose Urquidy, Trevor Rogers, Josh Rogers and Tanner Houck are all viable options in addition to those recommended above. Keep an eye on the precipitation in Baltimore, New York and Philadelphia, though nothing seems to be reaching any risk of postponement. Atlanta is the one trouble spot, as there is some potential for rain.