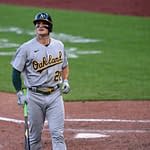 While lefties tend to get a longer leash than most, Sean Nolin has shaky control, allows too many home runs and would be better off as an opener than a starter. He is stretched out enough to go 90 to 100 pitches, but that is not necessarily a good thing. The Nationals bullpen has gotten quite a workout over the last six days, which also bodes well for Atlanta.

Though there are not any super savers projected to be in the lineup, only Austin Riley ($22) and Ozzie Albies ($21) are over $20 on Yahoo. In his last 170 plate appearances against opposite-handed pitchers, Jorge Soler ($19) has an otherworldly .297 ISO. Adam Duvall ($19) hit his 32nd home run of the season on Tuesday, and he profiles well against Nolin and should garner a prime spot in the batting order. Dansby Swanson ($17) has above-average right-handed power, and gamers tend to shy away from him since he often is in the bottom third of the lineup. This is a prime spot to look for a full Atlanta stack, with Freddie Freeman ($18) and catcher Travis d’Arnaud ($15) rounding out the key options.

This will be the second start for Kohei Arihara after he missed over three months recovering from surgery to repair an aneurysm in his right shoulder. In his last outing he threw 47 pitches after getting in 30 and 28 in two rehab assignments. Wednesday he should be in line for 55 to 65 pitches before giving way to the Texas bullpen. Home runs have been a major issue for Arihara, as he is allowing 2.25 per nine innings.

While Arizona is more effective against southpaws, they can run out a mostly left-handed lineup. Josh Rojas, Josh VanMeter and David Peralta will likely comprise the top of the order, along with switch-hitter Ketel Marte. Leaving Marte out of stacks creates differentiation, and he is a below-average contributor when facing right-handed pitchers. Pavin Smith and Daulton Varsho will also likely be in the lineup, and they can provide some differentiation at the bottom of the order.

The 2021 Fantasy Football season is almost here, so make sure you’re dialing in your mock drafts and draft boards with our FREE Fantasy Football Rankings. These are the rankings that Alex Baker himself uses — and created — for his own fantasy football leagues. Our 2021 rankings encompass everything from Half-PPR, Full-PPR, Standard, Dynasty and Rookie Dynasty leagues, with expert data and player profiles for every player you have questions on. Check out Awesemo’s rankings and win your league.

Dallas Keuchel is having his worst season since 2013. The power allowed is up, with a career-high 23 home runs, and the strikeouts are down to 13.4%. Oakland will be running out as many right-handed bats as possible, which makes them an intriguing team to stack on all slates.

Starling Marte has a long track record of performing well against southpaws, and he adds stolen base upside. While Keuchel does not allow many steals, the White Sox as a team have allowed the most in the league, and Marte has 20 in 33 games since joining the Athletics. Matt Chapman is finally coming alive, and in his last 166 plate appearances against lefties he has an impressive .268 ISO. Mark Canha and Josh Harrison are also solid options when they have the platoon advantage, and they are accompanied by reasonable salaries. Matt Olson is phenomenal against fellow lefties, with an elite .339 ISO this season, and he is on the short list for a home run on Wednesday. Finally, if Sean Murphy is behind the plate, he is a solid option to fill out the catcher requirement on Yahoo and DraftKings.

The main slate is not providing many gimme options at pitcher. Freddy Peralta is working his way back from a layoff; Yu Darvish has been abysmal since the beginning of July; and Kyle Gibson does not have enough strikeout upside to be considered an ace. Adam Wainwright also deserves a mention, but going against the Dodgers is no easy feat. This should make tournaments fun or treacherous, depending on personal risk tolerance.

Shane McClanahan is the first of two rookies that warrant consideration despite facing top offenses. McClanahan held his own on Thursday against Boston, allowing four runs in five innings, though that was offset from a fantasy perspective by eight strikeouts. That gives him 11 innings, 15 strikeouts, one home run allowed and a 4.09 ERA in two games. By no means is this game going to be a walk in the park, but he has been showing out well so far.

This will be the first time Alek Manoah has faced the Yankees since his MLB debut at the end of May. He has been as good as advertised so far, and while the power numbers are a little high, he is striking out a tick shy of 10 batters per nine innings. Their home run potential is immense, but Aaron Judge, Giancarlo Stanton, Luke Voit, Andrew Velazquez and whoever is playing catcher all are striking out over 26% of the time against right-handed pitchers.

After missing two months with a shoulder issue, Jose Urquidy threw 71 pitches in a strong outing against the Padres in San Diego. On Wednesday he should be closer to 80 pitches in a decent matchup against the Mariners. Seattle is in the bottom third of the league against right-handed pitchers, with a 90 wRC+. Their 25.7% strikeout rate is the third highest in the league, and it is accompanied by substandard power metrics.

Wednesday has six early games before getting to a frontloaded nine-game main slate. There are only two games starting after 8 p.m. ET, so most of the important information and starting lineups should be out well before lock. Pitching is going to be an adventure tonight, with no obvious options.