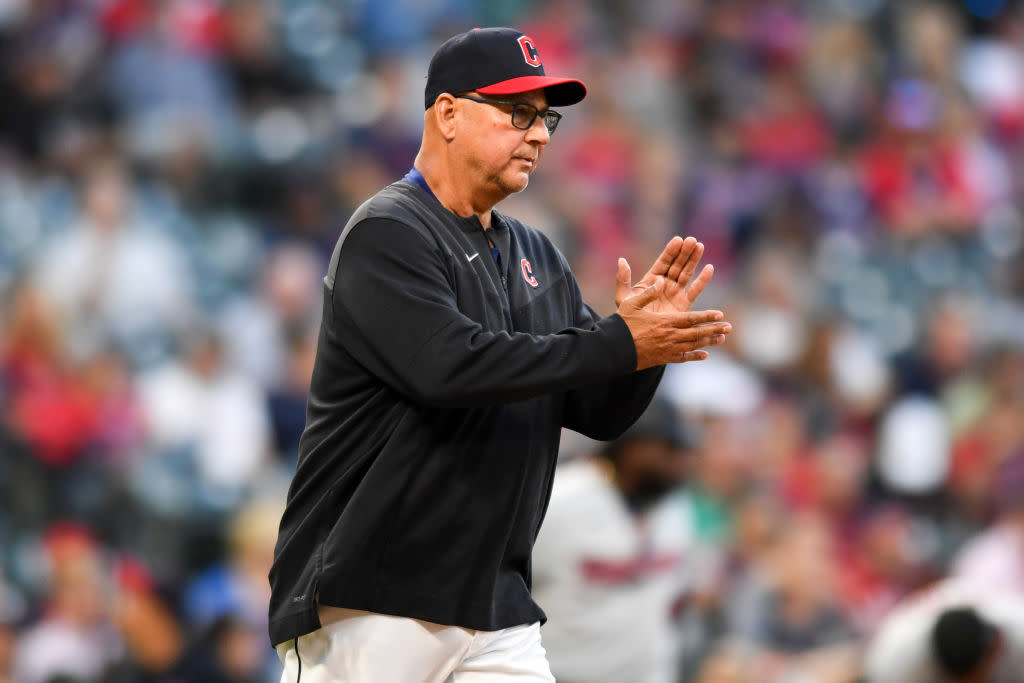 The American League Central division is a tight race between three teams, with two of them meeting this weekend live on Peacock when the White Sox take on the Guardians in Cleveland Sunday at noon ET. This series — and their lone remaining series in Chicago beginning September 20 — will go a long way toward crowning a Central champ.

Last year, the White Sox won the division by 13 games over Cleveland. This year, three teams (Guardians, White Sox, and Twins) were separated by just 2 games heading into Thursday.

Few people expected Cleveland to contend for the division this year. Andres Gimenez has been good all season, and on a tear recently, batting .393/.469/.571 in his last 16 games entering play Friday. And the bullpen has been solid, with James Karinchak, Sam Hentges, and Nick Sandlin holding consecutive scoreless inning streaks of 10+ IP each. The Cleveland bullpen overall has been one of baseball’s best in the second half (2.45 ERA in August).

The White Sox sputtered through much of the season, but have won 22 of 36 going into Thursday. Chicago had an eight-game losing streak in April and were 6.5 games back of first place on July 5. But they’re closing fast as we reach the three-quarter pole of the season — LF A.J. Pollock and RF Andrew Vaughn have gotten hot, and the pitching has been led by Dylan Cease (among the MLB leaders in ERA and K/9) and closer Liam Hendriks.

I wish I had a better feel for which of the three A.L. Central teams was going to win the division. It might come down to the final three games of the season, when the White Sox host the Twins in early October. The Guardians may have an advantage in that their last 9 games of the season will be at home, the last six coming against the lowly Royals.

But I can’t be certain if I favor the Guardians or the White Sox. Cleveland has 21 years of managerial experience at the helm in Terry Francona. Francona has won 1,845 games (including Wednesday, when his Guardians scored six runs in an inning after striking out three times!) and another 40 postseason games. He’s won two World Series championships. And guess what? He doesn’t have nearly the experience that Chicago manager Tony La Russa has. Francona is 63 years old. LaRussa is in his 61st year of professional baseball. LaRussa has won 2,882 games (about 1,000 more) and 71 postseason victories. Tony has won three World Series championships (and don’t get him started about 1988 and 1990).

After watching the recent Field of Dreams game in an Iowa cornfield, I considered other dream games I’d love to play out. It made me wish that this year’s tightly contested A.L. Central could be decided by a best-of-seven series played between former players of Francona and La Russa. In this dream series, the players would all be young and healthy and in the shape they were in when playing for Tito or Tony.

And which team would you favor?

At the training site for Team La Russa, I’m envisioning that the camaraderie and respect is apparent right away.

La Russa gathers the campers out from the different cornfields and gives a talk explaining his roster and lineups. “Those of you who have passed away in real life are going to get a little more playing time. So, Tony Phillips will start at second base. Where’s Hendu (Dave Henderson)? You’ll start Game 1 in centerfield, but then I’m going to start one of the left-handed hitters — Jim Edmonds or Ray Lankford in the other games.” Henderson laughs, and jokes, “great, I’ll get Pedro!”. Tom Seaver is more than happy to be selected to start Game 3 and a potential Game 7.

MLB schedule 2022: Every Sunday morning baseball game on Peacock, matchups, what to know

La Russa spots one more player: Bob Welch. Bob, I didn’t forget about you; you’re going to start Game 4. I really love this kid I have now — Dylan Cease — but you deserve it. You won 27 games for me in 1990. Welch interrupts, “28 wins if you count beating Boston in the ALCS,” and the team erupts. Welch continues, “After this series, Tony, I have to get back quickly. I’m pitching for Tommy Lasorda’s team as well.”

Ozzie Smith tells the skipper that Tim Anderson should start at shortstop. The Wizard of Oz didn’t play regularly in 1996 for LaRussa, and he’s not going to play regularly now.

And La Russa has a sticky situation with his catchers. He tells Hall of Famer Carlton Fisk that Fisk will start with his old Chicago batterymate Seaver. In the other contests, Yadier Molina gets the call.

Mark McGwire will share first base with Albert Pujols, each getting starts. In right field, Tony is planning on starting Larry Walker, although he gave plenty of consideration to Dave Parker. Reggie Jackson, like Ozzie, only played his final season for Tony and decides not to stay. Dusty Baker played only the second half of the 1986 season for La Russa — Dusty’s final year — but he loves taking Reggie’s roster spot for the final outfielder on Team La Russa.

In the ‘pen, there are three Hall of Fame closers, but Goose Gossage will be a set-up man to Dennis Eckersley. John Smoltz, like Ozzie Smith, barely played for La Russa so he’ll be the long man.

La Russa will start Dave Stewart, Adam Wainwright, and Seaver in the first three games. Welch gets the Game 4 start. That means there is no spot in the rotation for Steve Carlton. Carlton barely played for Tony, starting 10 games as a 41-year-old in 1986. But La Russa loves having “Lefty” on the team to pitch to one batter — David Ortiz.

There’s one other sticky situation in this game. Scott Rolen played — and played exceptionally well — for both managers. La Russa says he would be happy if Rolen played for Team Francona, especially with Albert Pujols (110 games at 3B) or Carney Lansford available.

Oh, and La Russa feels terrible, but on this historically capable squad, it is going to be impossible to find at-bats for LHB Harold Baines and RHB Jose Abreu. In 1984, Baines led the league in slugging, something Abreu did in 2014 under Robin Ventura and in 2020 under Rick Renteria.

“Hey Abreu, go out and win a World Series for me like Big Mac and Albert have done, then we’ll consider it,” the manager joked. Let’s face it, standards are high.

Meanwhile, at Camp Francona, there was optimism despite the specter of the opposing team.

Terry gathered his troops and took a less serious approach. “For those of you who were with me in 2011, there will be no fried chicken and beer in the dugouts!” which brought a hearty laugh to everyone.

Like La Russa, Francona is more than willing to give extended playing time to deceased players, meaning Darren Daulton will see time in the outfield.

“I hope you had a chance to check the starting lineup. I seem to always have a Jason on my team, and I love it. Jason Varitek (career high .872 OPS in 2004), you’re going to catch most of the time. I’m just going to catch Carlos in Game 1. And Jason Kipnis (931 hits for Francona, third most after Papi and Manny) is going to play a lot in the middle infield. Andres Gimenez might also find his way into the starting lineup. Man, Pedy (Dustin Pedroia), you have some real competition.

Francona needs help from the bench, so his reserves will include outfielder Gabe Kapler (to pinch-hit), and infielders Dave Roberts (to pinch-run) and Alex Cora (to steal signs — only kidding, couldn’t resist). And Rajai Davis is asked to be ready, to hit in a big spot late in a game.

If this team is going to beat Team La Russa, it must be because of the depth of starting pitchers he’s worked with throughout his career. Francona has Curt Schilling and Pedro Martinez to start the first two games, Corey Kluber and Carlos Carrasco to start the next two. “Although we may piggyback Jon Lester with Carrasco in Game 4”, adds Tito.

Jonathan Papelbon is the co-closer, along with Emmanuel Clase. Tim Wakefield, Shane Bieber, John Lackey, Cody Allen, and Andrew Miller round out the staff.

I know Team LaRussa is the stronger team. My goodness, Tony managed 12 Hall of Famers, and that doesn’t include McGwire, Canseco, Parker, Pujols, and Molina. But even if Team Francona fell behind 0-3 in games, I wouldn’t count them out.

But I would never count out Tito.

How to Watch White Sox vs Guardians on Peacock

NHL taking both awards show, draft to Nashville in June 2023