Who gets the ball for the Yankees in Game 1 of the American League Division Series?

Right now, it’s hard to argue for anyone other than Nestor Cortes on the hill to kick off postseason baseball for the Bronx Bombers. In his latest start — a 65-pitch, one-run gem Wednesday at Fenway Park — Cortes smoothly navigated through a scrappy Red Sox lineup in his second outing back from the injured list. The atmosphere was playoff-like, as 36,581 fans filled the stadium for a rivalry that isn’t what it used to be but still brings the heat.

Like he always does, Cortes stuck to business as usual.

While his command was not as sharp as we’ve seen, Cortes induced seven strikeouts and allowed just three hits across five innings. The Yankee southpaw relied heavily on his fastball, inducing seven swings and misses on the pitch, while mixing in his cutter and slider effectively. And he even brought the funk! Cortes broke out a hilariously weird windup against Rafael Devers, starting his usual leg kick, then bringing it back behind his left leg in something resembling a curtsy, before getting Devers to whiff on a fastball outside.

“I will be honest, I almost fell over,” Cortes told reporters in Boston on Wednesday. “But as I was going down, I said, ‘I have to let go of this pitch right now.’ If not, I wasn’t going to be able to make it. I was just happy it was a competitive pitch.”

As for Gerrit Cole, it seems like all season we’ve been waiting for him to consistently pitch like the ace the Yankees expected when they signed him for $324 million in 2020. At some point, and maybe that point is now, there’s nothing left for which to wait. He’s not a shutdown starter, he’s probably overpaid, and that’s OK.

It doesn’t necessarily mean the Yankees can’t win without a dependable ace (the result of the 2021 Yankees-Red Sox wild-card game notwithstanding). But it does mean that Cole has shown us that this is who he is in pinstripes: a good but not great strikeout-heavy starter with a penchant for giving up long balls.

Cole’s ERA rose to 3.30 on the season Tuesday after he coughed up three home runs at Fenway Park, a stadium that has continued to be a source of trouble for the right-hander. And the timing of the home runs was also deflating.

The first of the trio came in the second inning on a two-run shot to rookie Triston Casas, which put the Yankees behind 2-0. After Marwin Gonzalez tied the game with a solo home run in the third, Cole gave the lead right back to Boston when he served up a high heater that Reese McGuire muscled out of the park in the bottom of the frame. After Aaron Judge again knotted things up with his 56th home run of the season in the sixth, Cole’s meatball to Xander Bogaerts in the bottom of the inning sailed into the right-field seats and gave the Red Sox the lead again.

Though Judge hit yet another homer and the Yankees’ offense bailed Cole out, his erratic performance — complete with 10 strikeouts — was both familiar and irritating.

Aaron Judge does it again! 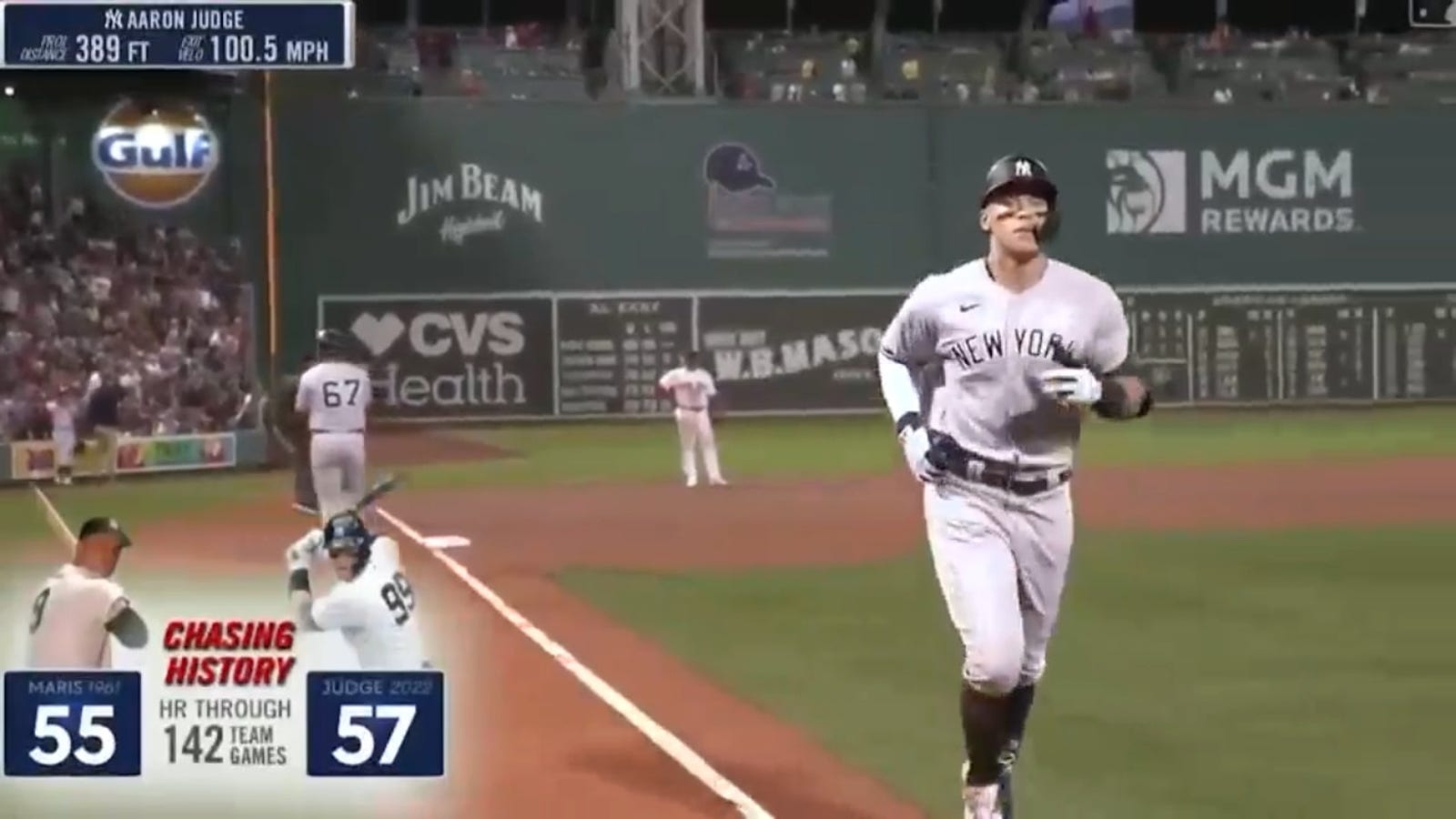 Aaron Judge hit two home runs against the Red Sox on Tuesday, bringing his season total to 57 with 20 games left to play.

When reporters asked why he struggles with the long ball in Boston, Cole indicated he was just as much in the dark. He said it was “just a high level of execution on their part,” but his poor results at Fenway are a pattern. His 12 home runs allowed at Fenway in the regular season are the most he has given up at any ballpark, excluding his home stadiums of Yankee Stadium, Minute Maid Park and PNC Park. We all remember his meltdown at Fenway during last year’s AL wild-card game, which included a pair of dingers in his ineffective two-inning start that put the Yankees in a 3-0 hole and, later, ended their season.

This year, he hasn’t quelled those long-ball concerns. Cole’s 27 home runs allowed are tied for third-most in the major leagues. It’s fair to wonder how much of Cole’s inconsistent command is a result of MLB‘s crackdown on sticky stuff, a ban on foreign substances like Spider Tack that began in earnest last summer. This year’s version of Cole may be the best the Yankees will get, the one they can expect going forward.

Even though Cortes (10-4, 2.70 ERA) deserves to be the Yankees’ Game 1 starter, it’s easier to imagine manager Aaron Boone giving the ball to Cole (11-7, 3.30 ERA) due to his contract alone. Take outfielder Aaron Hicks, for example. The Yankees have shown they’re willing to sacrifice the quality of their play because they’re stuck with the underperforming Hicks’ seven-year, $70 million contract through 2025. Cole’s nine-year, $324 million deal would explain why the Yankees will likely put him on the hill for Game 1.

But if the goal for the team’s pitching staff is consistency, effectiveness and dominance, then Nasty Nestor Cortes is the answer. Game 1 starters are tasked with setting the tone and, if they’re capable, carrying the team to the World Series. Cortes has earned the opportunity to be that starter for the Yankees.

Deesha Thosar is an MLB writer for FOX Sports. She previously covered the Mets for the New York Daily News. Follow her on Twitter at @DeeshaThosar.

MacKinnon says he and Avalanche are close on a new contract

Fantasy Hockey 2022-23: NHL players who are poised for bounce-back seasons