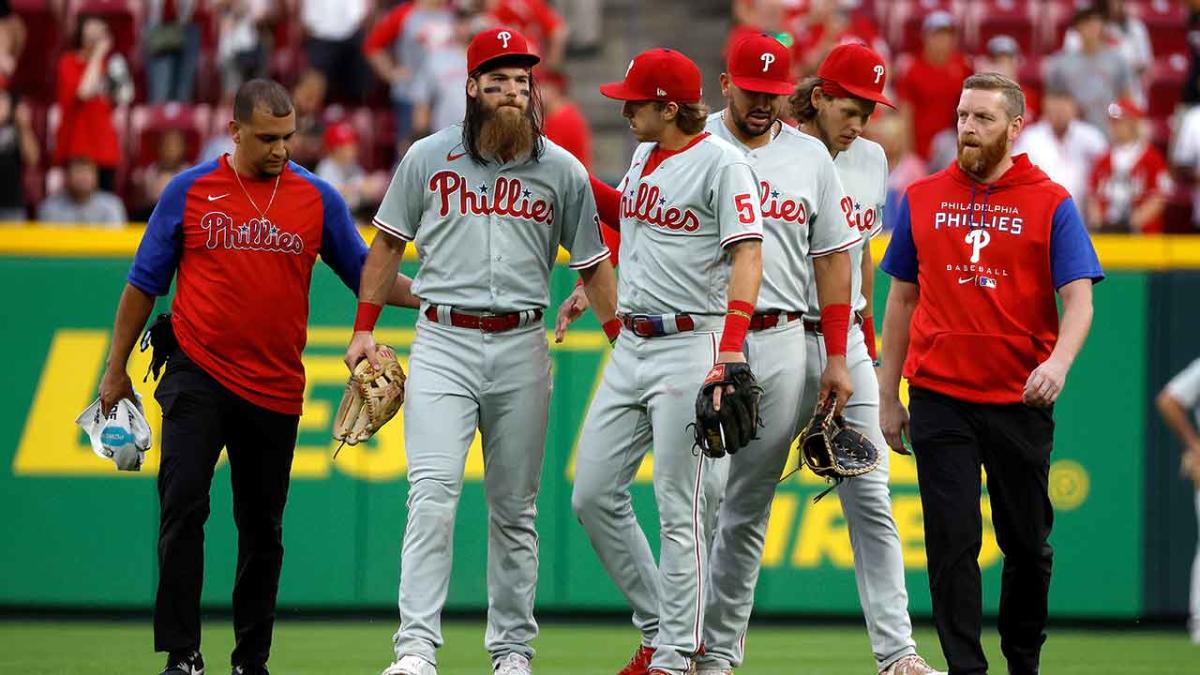 CINCINNATI — Phillies center fielder Brandon Marsh hobbled off the field in the bottom of the third inning Tuesday night with an apparent left leg injury.

Marsh injured himself trying to make a leaping catch at the wall on what ended up being a home run by Cincinnati’s Jonathan India.

Marsh went to the ground in a heap and appeared to be in considerable pain as Phillies athletic trainer Christian Bermudez rushed to tend to him on the warning track in center field.

After a few moments, Marsh was able to get to his feet and leave the field under his own power. He was noticeably limping and favoring his left leg.

The Phillies did not provide immediate word on Marsh’s condition.

Marsh was acquired by the Phillies earlier this month in a trade with the Los Angeles Angels. The Phillies picked him up to be their regular center fielder.

If Marsh is out for any length of time, it will be a test to a Phillies’ outfield already down Bryce Harper. If Marsh misses time, the Phillies will have to use Matt Vierling in center field. He started in left field Tuesday night and moved over to center when Marsh left the game. Regular left fielder Kyle Schwarber is nursing a right calf strain. The Phillies hope to hold him out until Friday.

Nick Maton came off the bench and played left field after Vierling moved to center Tuesday night. Maton is an infielder. He’d played in just two games in the outfield in his minor-league career and none in the majors.

The Phils have two outfielders on the 40-man roster in the minor leagues, Simon Muzziotti and Jhailyn Ortiz. Muzziotti is a pure center fielder who spent some time in the majors early in the season. He could be summoned to Cincinnati if Marsh ends up on the injured list and the Phils need outfield depth for Wednesday afternoon’s game.

Check back for updates on Marsh’s condition.