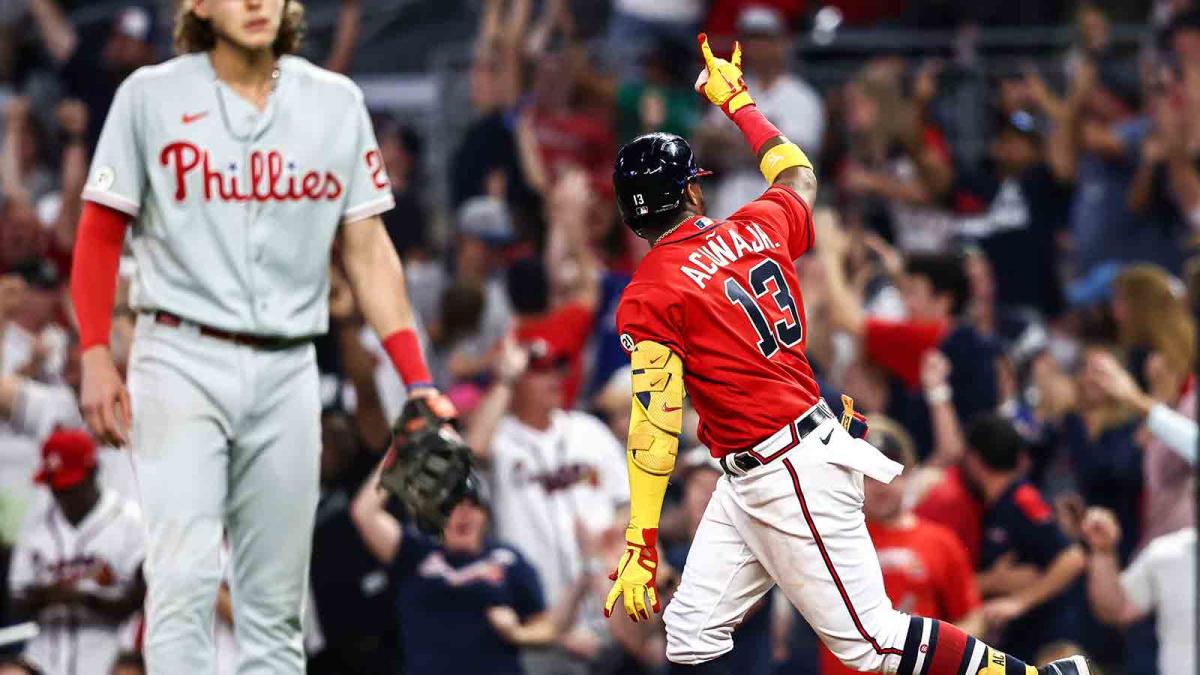 Phillies, Dominguez let one get away in playoff atmosphere in Atlanta originally appeared on NBC Sports Philadelphia

ATLANTA – The Phillies haven’t been to the playoffs in a decade, but they got a taste of playoff atmosphere at Truist Park on Friday night and it didn’t sit so well on the ol’ stomach.

Playing in front of a high-energy, sellout crowd of 42,578, the Phillies coughed up a one-run lead in the bottom of the eighth inning and suffered a demoralizing 7-2 loss to the Atlanta Braves, a team they will see twice more this weekend, four times next week and then maybe again in the first round of the playoffs in early October – right back here in Atlanta.

“Obviously, it was a good taste tonight if we were to be here,” said Kyle Schwarber, who got the Phils on the board with his career-high 39th homer in the fourth inning. “You saw a sold-out crowd and we want to get there and we’re going to do anything we can to get there.

“The most important thing is just trying to make it there right now. Obviously, we’d all say we wanted to walk out of here with a win tonight, but that’s part of the game and we have to move on to the next day because we still have some things to do.”

The Phils are down to 18 games remaining in the regular season. They currently hold the second National League wild-card spot and would play Atlanta in the first round if things hold up.

The Braves certainly had to gain a measure of confidence against the Phillies on Friday night. The win gave them a 7-6 record against the Phils this season, with six more to play, and it came via a rally against bullpen ace Seranthony Dominguez, a pitcher that the Phils need to shine if they’re going complete their journey to the postseason and possibly do some damage in the October tournament.

In his third appearance since coming off the disabled list after a bout with triceps tendinitis, Dominguez was called upon to protect a 2-1 lead in the eighth inning. He got into trouble right away by walking the leadoff man, pinch-hitter Eddie Rosario. One pitch later, Ronald Acuna Jr. extended his arms on a 98-mph fastball and drove it over the right-field wall to give the Braves a 3-2 lead.

The home run was Acuna’s 12th in 57 career games against the Phillies.

Before the inning was over, Dominguez allowed two more hits and a walk. He was charged with five of the six runs the Braves scored in the inning. To put that in perspective, he had only allowed eight runs total in 46 previous innings this season. The five runs were the most Dominguez has allowed in any outing of his career. His previous high was three.

“He was spraying the ball a little,” said manager Rob Thomson, who used Dominguez in the eighth because the top of the Braves’ order was coming up. If Dominguez had protected the lead, David Robertson would have gotten the save opportunity.

After the game, Dominguez said he was “100 percent” healthy.

“In all honesty, I felt pretty good,” he said. “I just wasn’t executing pitches. When I needed to throw a quality pitch, I couldn’t do it. First-pitch strikes were not there. I was falling behind. I didn’t have my best command.”

The loss was difficult to swallow because the Phillies got a very nice start from Ranger Suarez, who could get a start in the postseason. He allowed just a run – it came when he served up a 3-0 home run ball to William Contreras in the bottom of the fourth – over six innings.

In addition to Schwarber, Jean Segura hit a solo homer for the Phils. It gave them a 2-1 lead in the fifth. Schwarber’s 39 homers are the most by a Phillie in a season since Ryan Howard hit 45 in 2009.

“Suarez did a great job,” Thomson said. “Any time you lose a game like that it’s tough, but these guys know what’s ahead of them. They’re going to bounce back just like they have all year.”

Aaron Nola gets the start against Jake Odorizzi on Saturday night.

The Home of the Braves should be rockin’ again.