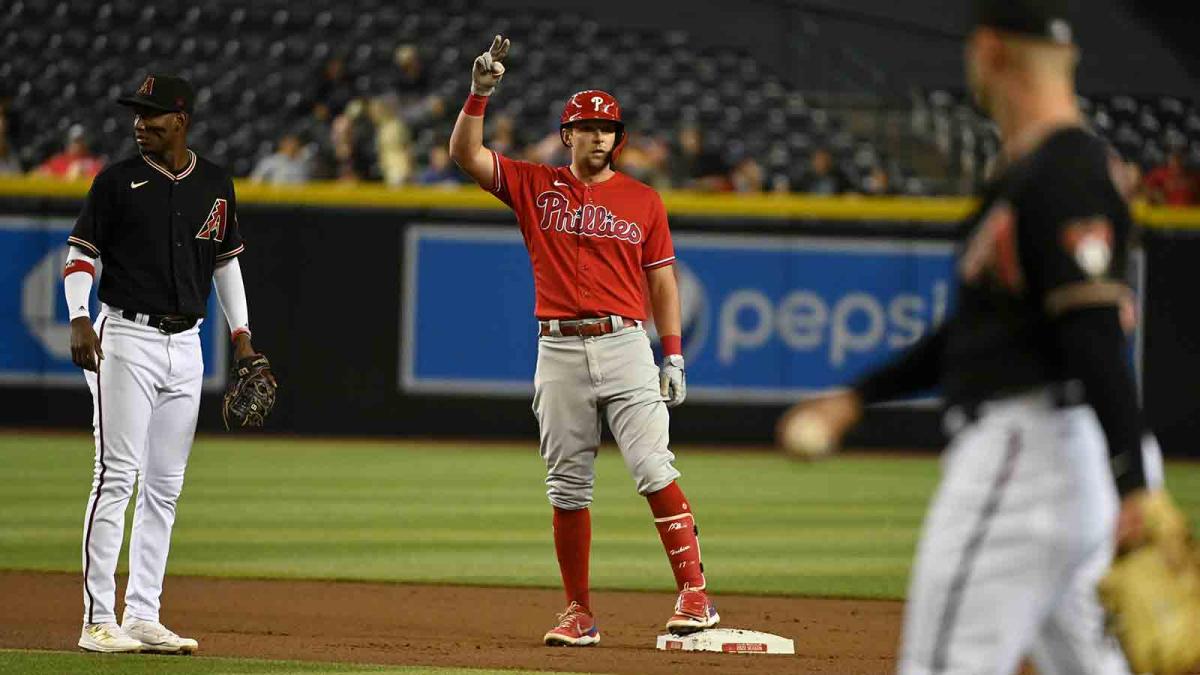 PHOENIX – Hey, how ‘bout a thumbs-up for Bailey Falter.

The guy has spent the season riding up and down the Northeast Extension between Philadelphia and Lehigh Valley, a big-leaguer one day, a minor-leaguer the next.

He has been recalled by the big club seven times this season. That’s just the way it is when you’re the sixth starter on a five-man staff.

Sore elbow. Come on down, Bailey.

Someone needs an extra day. You know the way, Bailey.

Falter filled in for injured Zack Wheeler last week and beat the Pittsburgh Pirates. He was back on the hill Wednesday night and delivered another win for a Phillies team that desperately needed one.

In the best of his 11 big-league starts, the lanky, 25-year-old left-hander pitched 6 1/3 innings of one-run ball and did not walk a batter as the Phillies hammered the Arizona Diamondbacks, 18-2, under the big top in downtown Phoenix.

Falter, who scattered five hits, including a solo homer, was probably in his last inning of work when he left the game with one out in the seventh because of right groin tightness. The exit was precautionary, and after the game, Falter said he was fine and would not miss time.

With 32 games (now 31) to go in the season, this was pretty close to a must win for the Phillies. They had lost three straight. The wild-card race was tightening with San Diego and Milwaukee both winning earlier in the day. The Phillies starting pitching had not been good the previous three days. The bullpen needed some rest.

Falter came through as the Phillies exorcised some desert demons. They had lost seven in a row in Arizona dating to 2019, including a pair of ugly defeats Monday and Tuesday night when starting pitchers Ranger Suarez and Aaron Nola were lit up for a total of 14 runs.

What did it feel like to come through for a team in need?

“Absolutely amazing,” Falter said. “We needed the W tonight and that’s what we did. The bats were fantastic and I did my job, gave us a chance to win.”

Pitching with family and friends in the stands from his home state of California, Falter used mostly a fastball-curveball mix. His fastball is not an overpowering pitch. He relies on the ability to command it above barrels. He had a good one Wednesday night. The pitch topped at 94 mph and he consistently threw first-pitch strikes.

The Phillies are 4-0 in Falter’s last four starts in the majors. All have been quality starts of six or more innings and three or fewer earned runs. Not bad for a guy who has shuttled back and forth to Triple A.

“You have to adapt if you want to stick around in this game,” Falter said. “I’ve got a job to do and you have to roll with the punches sometimes. It’s not always going to be fair. It’s business. That’s all it is.”

After being stymied by Arizona right-hander Zac Gallen the night before, the Phillies bats came alive against rookie lefty Tommy Henry, who gave up seven hits and seven runs in four innings.

The Phillies finished the night with 22 hits and were an astounding 15 for 29 with runners in scoring position. Every Phillies starter had at least two hits. Bryce Harper, Rhys Hoskins and Brandon Marsh had three each.

Thursday is an off day for the Phils, who are 73-58 and control the second National League wild-card spot. They open a weekend series against the San Francisco Giants at 24 Willie Mays Plaza on Friday night. The Giants are reeling. They were swept by the Padres on Thursday and have lost seven straight and 11 of 13 to fall to 61-68.

The Phillies, who will send Kyle Gibson, Noah Syndergaard and Suarez to the mound in the series, need to take advantage of a struggling team. Nick Castellanos, who did not play in the Arizona series because of an injury to his right big toe, could return in San Francisco.

During the Phils stay in San Francisco, Wheeler, who has been sidelined with forearm tendinitis, will throw a bullpen session, his final hurdle before being activated from the injured list and pitching when the Phils return home Tuesday night.

It’s unclear what Wheeler’s return will mean for Falter. A trip to the bullpen? Or another trip back up the Northeast Extension?

“No matter what they decide to do with me, I’ll be ready,” he said. “That’s all that matters.”

Where are the Boston Celtics expected to finish the 2022-23 regular season at?