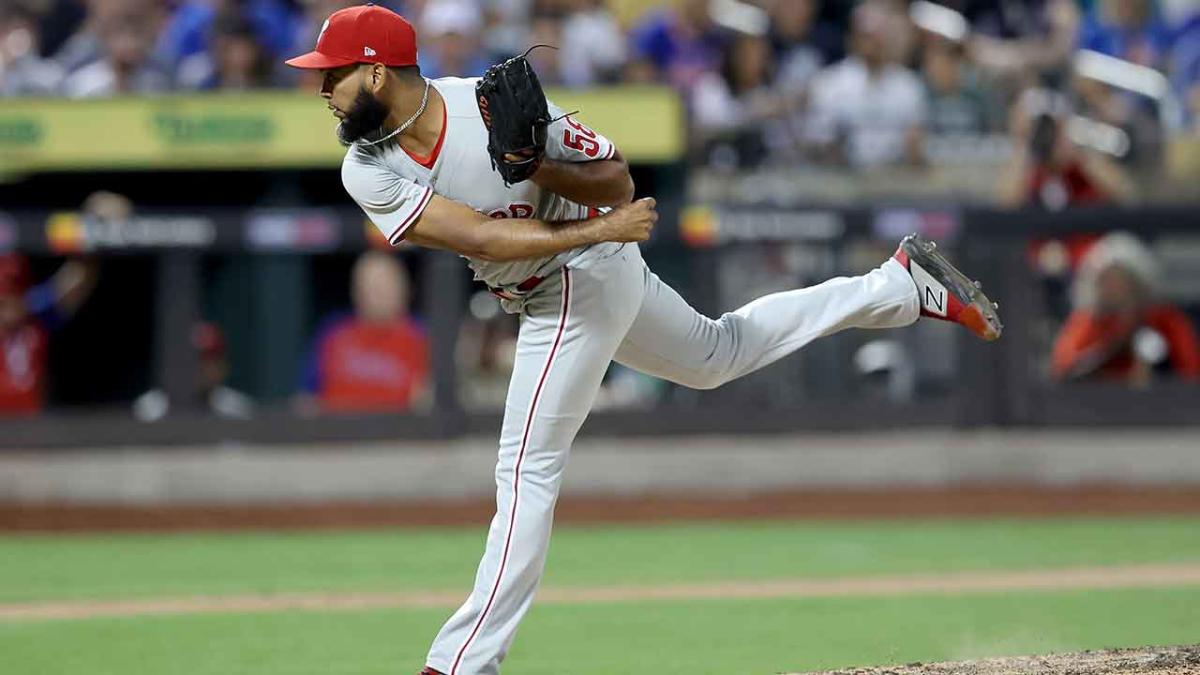 The Phillies breathed a sigh of relief Monday as the results of closer Seranthony Dominguez‘ MRI showed no structural damage in his right arm.

Dominguez was placed on the 15-day IL Sunday (retroactive to August 18) with triceps tightness, an ominous injury for a pitcher who missed almost all of 2020 and 2021 after undergoing Tommy John surgery.

Dominguez admitted Saturday night that he was worried, but it appears he’s avoided a serious injury. He is dealing with inflammation and will not pick up a baseball for five days. The pain is on the outside of his arm, above the right elbow. There would be more cause for concern if the pain was on the inside.

Dominguez is first eligible to return from the injured list on September 2 in San Francisco. Phillies manager Rob Thomson said it’s possible Dominguez could return then but he’s unsure.

When he does return, the Phillies will be cautious.

“Just got to monitor his workload, which we’ve been trying to do all year and talking to him about all year long,” Thomson said. “Just keep monitoring it.”

In the meantime, the depth and quality of the Phillies’ bullpen have taken a hit with Dominguez out and Corey Knebel done for the season. David Robertson has basically been thrust into full-time closing duty, though the Phils could also go to Brad Hand or Jose Alvarado in the ninth inning. Robertson threw 36 pitches Saturday and 21 more on Sunday so he is unavailable Monday night against the Reds. The Phils would likely go to one of those two lefties in a save situation but could use a laugher.

Kyle Schwarber did outfield and change-of-direction drills Monday for the first time since straining his right calf on August 11.

Schwarber, the DH in his last four games, could make his return to left field on Tuesday if he responds well to Monday’s pregame work.

“Best-case scenario, maybe tomorrow,” Thomson said. “If there’s anything out of the ordinary, we’d wait a day. He’s run so well and had so many opportunities to run that we feel pretty good about it.”

The Phillies’ center fielder suffered a leg injury on August 16 that appeared much scarier than it has turned out to be. Marsh suffered a bone bruise in his knee and hurt his ankle trying to rob a home run against the Reds.

He avoided the worst and actually did some running on Monday afternoon.

“Today we just did straight jogs,” Marsh said. “The starting and stopping, I was a little hesitant at first but once we got going, it got better. It was a great day out there in my eyes and the training staff’s eyes.

“Gonna see how I feel tonight and tomorrow and reassess, then work on a plan of attack for tomorrow. It’s recovering super well. I’m very happy where we’re at.”

Marsh is eligible to return from the injured list on Friday. Could he?

“Can’t promise anything but that’s what I’m shooting for and I feel like that’s what the team is shooting for. It’s been an incredible five days. It’s recovered a lot better than I ever thought it would.”

Andre Drummond plans to go down as the ‘best rebounder ever’