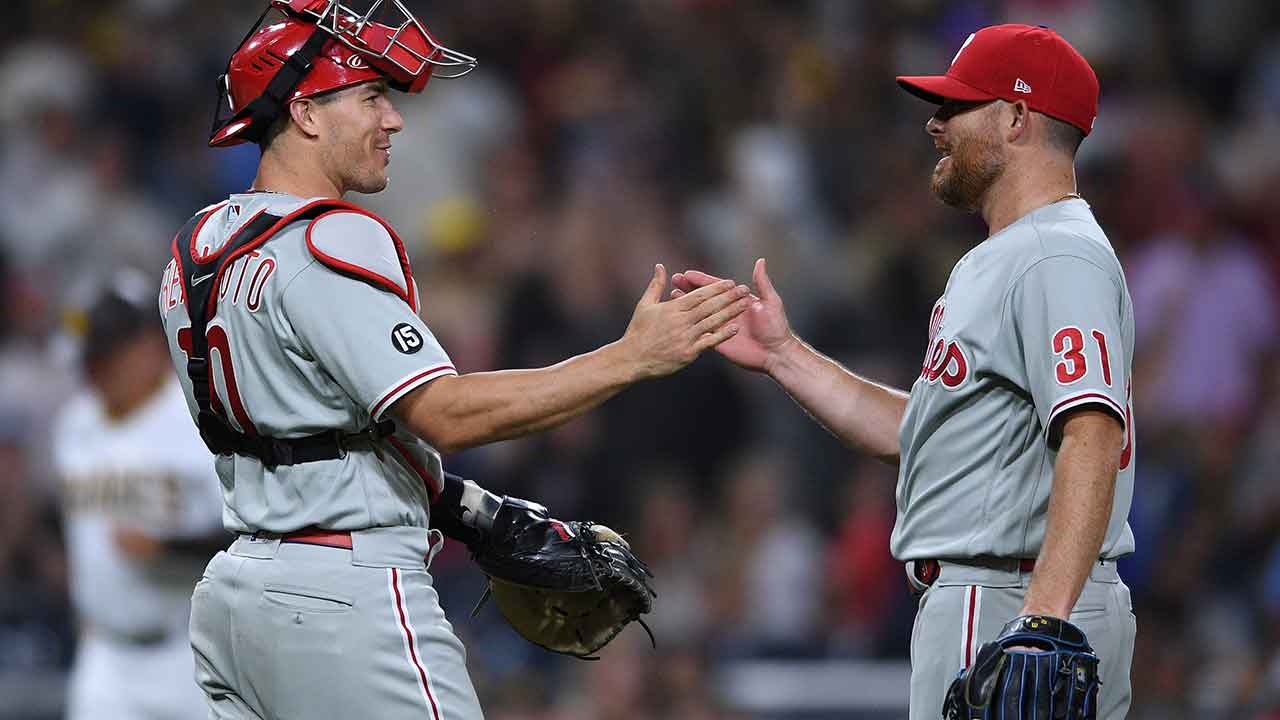 The Phillies got some clutch hitting and some clutch pitching in snapping a four-game losing streak Friday night in San Diego.

J.T. Realmuto, Bryce Harper and Andrew McCutchen, who were a combined 2 for 33 during a trio of losses the previous three days in Arizona, all had important extra-base hits, and four pitchers survived a flurry of baserunners in the Phillies’ 4-3 win over the Padres.

Some math: The Phillies are 62-60. They are four games behind first-place Altanta in the NL East. The Braves, winners of three straight NL East titles, are 14-3 in August. They continued their roll with their seventh-straight win Friday night in Baltimore. The Orioles are the worst team in baseball and a complete embarrassment. They are in full tank mode, trying to lose games and succeeding at it. They have lost 16 in a row. The Braves play them again on Saturday and Sunday.

More math: The Padres have lost four in a row and eight of their last nine to squander their lead in the NL wild-card race. They are now tied for the second wild-card spot with the Cincinnati Reds, who cleaned up on the Phillies last weekend. St. Louis is 3½ back in the wild card and the Phillies are four back.

The Phillies can continue to make things interesting Saturday and Sunday in San Diego.

It’s really up to Aaron Nola to set the tone.

The veteran right-hander has been the most frustrating enigma on this 2021 Phillies team. He has pitched several gems but, on the whole, has been unable to put together a sustained run of consistency. He is 7-7 with a 4.48 ERA and the team is a disappointing 11-13 in his 24 starts. Nola has pitched five or fewer innings in 11 of his 24 starts, including his last one when he allowed four runs in 4⅓ innings in a loss to Cincinnati.

Nola has struggled with fastball command all season. He’s had trouble putting away hitters with two strikes. He’s made mistakes over the plate that have ended up over the wall. He has allowed 20 homers in 134⅔ innings. He gave up just 17 in 212⅓ innings while finishing third in the NL Cy Young race in 2018.

Starting today, Nola must turn around his season if the Phillies are going to have a run in them.

“I’m going to do everything I can in my will to do that,” he said after his last start. “We don’t have too much longer left in the regular season. It’s kind of a sprint now. I believe it will always turn around and we can keep winning. I’ll always believe that.

The Padres’ lineup Saturday is expected to include Nola’s brother, Austin, one of the Padres’ catchers.

Phillies pitchers — Matt Moore, Hector Neris, Archie Bradley and Ian Kennedy — gave up just four hits Friday night, but they walked 10 batters and hit another. That’s a lot of traffic to navigate, but they got the job done and got big outs with men on base to make the big hits by Realmuto (RBI double), Harper (two-run homer) and McCutchen (RBI double) stand up. Kennedy notched a four-out save.

The impact of using Neris, Bradley and Kennedy for 31, 42 and 30 pitches, respectively, could be felt Saturday if one or all are not available. This could make it imperative that Nola gives the Phillies some length. He has had back-to-back quality starts just twice this season. The Phils could sure use one Saturday.

Amid 16-game losing streak, rebuilding Orioles have no choice but to 'grind through it'