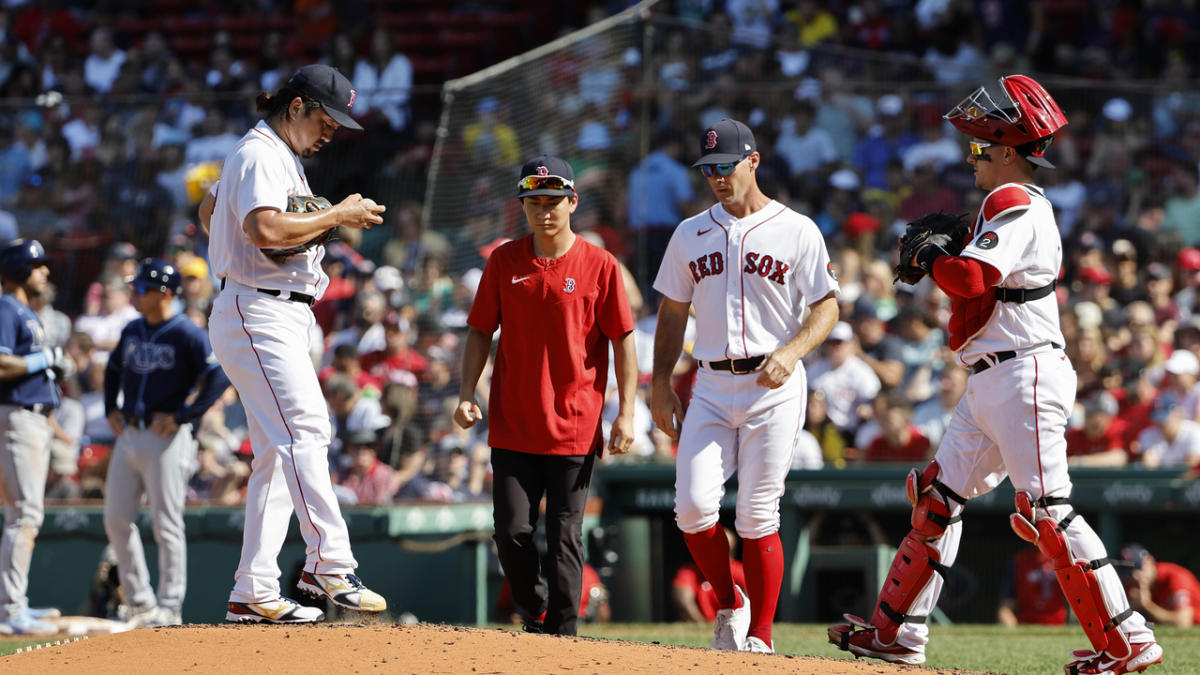 Chaim Bloom was supposed to be good at bullpens.

In Tampa Bay, the Rays turned the procurement of relievers into an art form, cycling through arms like a car wash after the last road salt of winter. Bloom’s early swings showed promise, whether it was nabbing Garrett Whitlock in the Rule 5 Draft, signing the relatively anonymous Hirokazu Sawamura out of Japan, or claiming right-hander John Schreiber off waivers from the Tigers.

Then came 2022. Whether you call it mismanagement or woeful neglect, the result is the same — the bullpen has just murdered the Red Sox all season. On Sunday, Bloom belatedly did something about it, although far too late to change the club’s fate.

Tomase: Three players who should be part of the solution for Red Sox

Per multiple reports, the Red Sox plan to designate Sawamura and left-hander Austin Davis for assignment. Each befouled Sunday’s 12-4 loss to the Rays, with Davis allowing four runs in two innings and Sawamura serving up three while working at his trademark unwatchable pace.

The moves are long overdue, and right-hander Ryan Brasier probably should join them, though he has at least temporarily been spared. It’s an indictment of the farm system that all three have pitched so much, which we’ll probably be reminded of when right-handers Kaleb Ort and Zack Kelly are summoned from Triple-A Worcester. Don’t mistake either for saviors. The former has allowed 12 runs in 12 innings with Boston, while the latter will be making his big league debut at age 27 after bouncing between three organizations.

The moves, coming at this stage of a suddenly lost season, have a distinctly “why bother?” feel. It has been clear for months that Sawamura can’t handle inherited runners, that Davis has mystifyingly lost his way since carrying a 2.16 ERA into early July, and that Brasier can’t be entrusted with leads with any consistency.

But Bloom stubbornly stuck with all of them in a misguided attempt to maintain organizational depth. As much as the clubhouse hated trading starting catcher Christian Vazquez to Houston at the deadline, Bloom’s truly unforgivable sin was failing to acquire a single reliever when it still might’ve mattered. Even a year ago, the unheralded Hansel Robles ended up proving indispensable to the playoff push.

But this year, the front office did nothing, leaving manager Alex Cora to piece together anywhere from three to five innings a night with bent paper clips and Big League Chew. The results have been depressingly predictable. Red Sox relievers rank fourth in blown saves (23) and fourth-to-last in ERA (4.54).

Even worse, they’re straining the effective relievers they have, with Schreiber on the verge of burning out and Whitlock throwing multiple innings in eight of his last 10 outings. That’s not a recipe for longevity, even for someone as efficient as the dominating right-hander, especially since the temptation for Cora to use him more frequently must be overwhelming.

How the Red Sox let five months elapse without addressing their most glaring weakness is inexcusable, especially for an executive who cut his teeth in Tampa, where bullpen churn was a way of life. In 2017, Alex Colome ripped off 47 saves for the Rays, only to be replaced a year later by Sergio Romo, who in turn yielded to Emilio Pagan, who then made way for Nick Anderson, who handed off to Diego Castillo last year, at least until he was traded to Seattle.

The dark underbelly of the Tampa model is how many relievers blow out because they’re inherently replaceable, and the Red Sox are in danger of adding Schreiber, certainly, to that pile. But the high turnover only works with a stable of capable arms, and the Red Sox left themselves short right from Opening Day.

They relied on Matt Barnes, even though the right-hander melted down so thoroughly last fall, he needed to be left off the ALCS roster. They trusted that Brasier’s 12 good innings would carry over. They ignored Sawamura’s terrible walk and home run rates, which told us more than his 3.06 ERA. They messed around with Whitlock and Tanner Houck as starters, wasted $4 million on left-hander Jake Diekman, and somehow carried Phillips Valdez off and on until designating him for assignment in July.

At no point was the bullpen anything other than a flagrant, appalling, tornado siren of an emergency, and yet the Red Sox did nothing until finally pulling the plug on some of their worst arms at the end of August, when the impact will likely fall somewhere between negligible and nonexistent.

Bloom’s challenges this winter will be plentiful on the pitching side, because he needs to build a rotation, too. Whatever he does, this much is certain — this bullpen can’t happen again.