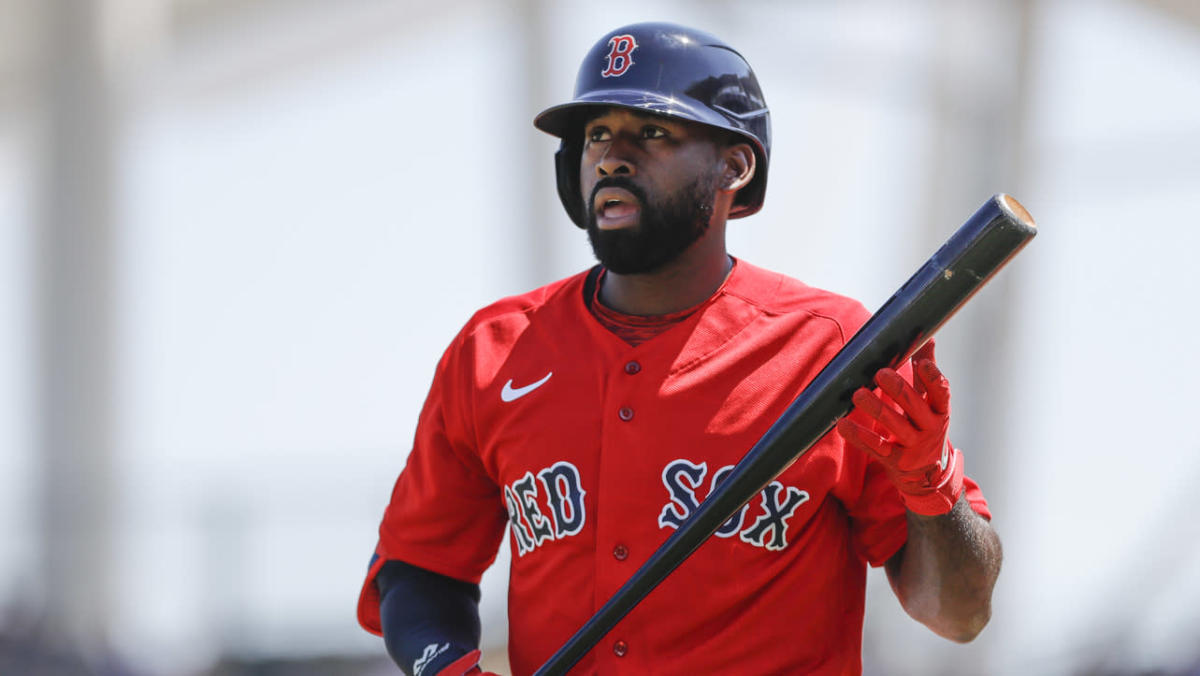 Boston Red Sox fans were taken by surprise when the team announced the return of Jackie Bradley Jr. just before the MLB lockout in early December. They only grew more confused when it was revealed Hunter Renfroe was headed to the Milwaukee Brewers in the deal.

Renfroe was one of Boston’s biggest bats during the regular season. The 30-year-old right fielder slugged 31 homers with 96 RBI and a .816 OPS. While his defense was shaky at times, his arm helped pick up the slack as he led the league with 16 outfield assists.

Red Sox infield preview 2022: Why Trevor Story is a game-changer

Despite Renfroe’s cannon, there’s no doubt Bradley’s return significantly improves the Red Sox defense in 2022. The question, as it always has been with JBJ, is whether his Gold Glove outweighs his shortcomings at the plate. It definitely didn’t last season in Milwaukee when he hit just .163 with 132 strikeouts in 134 games.

A center fielder for 870 of his 980 career games, Bradley is set to take Renfroe’s spot in right field when facing right-handed pitching. When there’s a southpaw on the mound, manager Alex Cora plans to use designated hitter J.D. Martinez in that spot. Kiké Hernandez will stay in center while Alex Verdugo mostly sticks in left field.

It’s a bold plan, to say the least. The addition of Trevor Story brought Boston the right-handed bat it needed to replace Renfroe, but the right field situation still is one of the team’s bigger question marks heading into the new campaign.

Sox fans will just have to hope the 2020 version of JBJ — who hit .283 with a .814 OPS in 55 games — shows up. Even a .230 BA, .720 OPS season from Bradley will work if the defense remains elite. But given Bradley’s disastrous 2021, it’s fair to question why the Red Sox believe this plan will succeed. After all, they know JBJ better than anyone.

Here are a few other Red Sox outfield storylines to monitor during the 2022 season.

J.D. Martinez: More than a DH

Martinez, as we already pointed out, will see more time in right field this season when facing left-handed pitching. It’s a decision that could hurt the Red Sox both defensively and at the plate.

Even though the veteran slugger has 500 games under his belt at the position, he’s been used in left field more often during his time in Boston than right. It also doesn’t help that playing right field at Fenway Park is one of the tougher defensive duties in the game. Just ask Renfroe, who was a Gold Glove finalist in 2019 with San Diego and led all outfielders with 12 errors last year.

Martinez’s offensive production also could take a dive this season as his defensive responsibilities increase. We already witnessed this last season, when the 34-year-old posted a .945 OPS in 487 plate appearances as a DH, but only a .641 OPS in 122 PAs as a left fielder and a .462 OPS in 25 PAs as a right fielder.

Perhaps Cora can work his magic again and the platoon will pay off. But if Martinez struggles out the gate, adjustments may have to be made.

Can Kiké Hernandez build off strong first season in Boston?

Kiké Hernandez was signed last offseason as a super utility man. The expectation was he’d be a new and improved version of Brock Holt, primarily used at second base but also in the outfield when needed.

Hernandez spent 47 games at second but primarily was used as the team’s starting center fielder. He thrived in that role with one of the best offensive seasons of his career while also providing Gold Glove-caliber defense. The ex-Dodger had eight outfield assists and 14 defensive runs saved.

Hernandez was key to Boston’s regular-season success, but he took it to another level with a historic postseason performance. He hit .408 with five homers and a 1.260 OPS in 11 games during the 2021 playoffs.

Heading into 2022, Hernandez could be a legitimate Gold Glove candidate with more games in center. He’ll also look to continue his success as Boston’s leadoff man after slashing .254/.342/.457 with 30 doubles, three triples, 19 homers and 55 RBI in that role last year.

His impressive debut season with the Red Sox made him a fan favorite, but Hernandez will have to prove it wasn’t a flash in the pan.

Christian Arroyo was the Red Sox’ primary second baseman in 2021, but with Story now in the fold, he’ll have to take on a new role. We could see the 2013 first-round draft pick used as a utility man this season at various infield spots as well as the outfield.

He’s more than willing to take on that challenge.

“Having talented players is without a doubt one of the best parts about being part of the Red Sox,” he said earlier this month, per MassLive.com. “We have a bunch of talented guys here. But if you add a guy like Trevor Story, you’re adding another superstar caliber player. So for me, I’m here to play baseball. I’m here to win baseball games. Whatever I need to do, I’ll do it. Because for me, getting to experience the postseason last year was the greatest thing ever. And that’s where we want to get back to.”

That kind of attitude helped Arroyo gain respect from both his fans and teammates a season ago. It didn’t hurt that he also was one of Boston’s most clutch performers.

The key for Arroyo will be his health. The 26-year-old missed time last season due to COVID-19 and a litany of injuries. If he can stay on the field, Arroyo will be an important piece of the puzzle in 2022.

The Jarren Duran hype train may have gotten a little out of hand last year as the speedy outfield prospect struggled mightily in his midseason call-up to the majors. In 33 games (112 plate appearances), Duran hit just .215 with 40 strikeouts. His power didn’t translate to the big-league level as he notched only two homers.

The 25-year-old, whom SoxProspects.com ranks fourth in Boston’s farm system, will begin the season in Triple-A Worcester. If he repeats last year’s performance in the minors (16 homers, .873 OPS in 60 games), it’ll only be a matter of time before he’s given a second chance with Boston. He’ll just have to cut down on his swing-and-miss issues to make the most of that opportunity.

Duran carrying his minor league success into The Show would be a massive development for this Red Sox team. Not only would it add much-needed outfield depth to the roster, but it would also add an element of speed the club has lacked for several years. Duran is a game-changer on the basepaths, and he already showed that in spring training by scoring from second base on a sac fly. Of course, as the saying goes, “You can’t steal first base”.

March Madness 2022: NBA Draft prospects who helped or hurt their stock during the NCAA Tournament

Fantasy Hockey: Did the non-trade help Evgenii Dadonov take off?