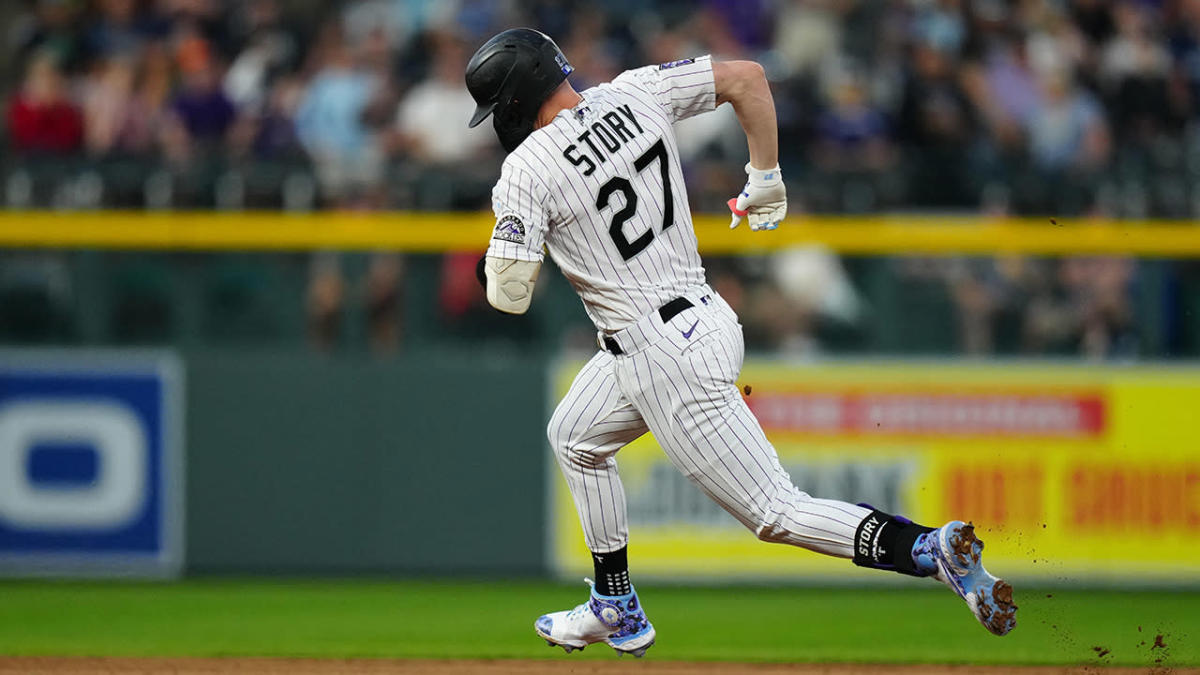 Red Sox chief baseball officer Chaim Bloom doesn’t just hand out $100 million-plus contracts on a silver platter. So Boston signing Trevor Story to a six-year contract worth $140 million — to play a new position, no less — is a tremendous vote of confidence in the two-time All-Star.

Story’s track record speaks for itself. The 29-year-old has been one of the game’s premier shortstops over the last six seasons. He amassed 158 homers and a .863 OPS during his Colorado Rockies tenure, but he’s much more than a big bat who benefitted from playing at Coors Field.

We won’t focus too much on the home/road splits here, but our John Tomase recently broke down why those numbers shouldn’t cause Red Sox fans to worry.

If you haven’t tuned into many Rockies games over the last few years (we certainly won’t blame you if that’s the case), you might be unaware of what Story brings to the table other than his right-handed pop.

For starters, he’s an athletic freak and one of the top defensive shortstops in the league. His nine defensive runs saved last season ranked fourth among all players at the position.

With Xander Bogaerts remaining Boston’s full-time shortstop, at least for 2022, Story will play second base for the first time in his MLB career. He did, however, play the position in 24 minor league appearances (12 each at Double-A and Triple-A).

“I think playing second is something that I’m comfortable with,” Story said during his introductory press conference Wednesday. “It’s something I did a lot in the minor leagues. Playing on that side of second, I feel like I’ve done that a lot in the shift over the past few years.

Given Story’s defensive prowess and impressive athleticism, Sox fans should take him at his word.

The LSU product also makes his presence felt on the basepaths, an area Boston has severely lacked in over the last few years.

Catcher Christian Vazquez led the team in steals last season with eight. As a group, the Red Sox totaled 40 stolen bases. Story stole 20 bags and has notched at least 20 steals in each of the last three full seasons. He led the National League with 15 steals during the COVID-19 shortened 2020 campaign.

In 2018, Story became the first MLB shortstop ever to tally 40 doubles, 30 home runs and 25 steals in a single season. If Story’s switch to second base goes smoothly and the Coors Field narrative is put to rest, the Red Sox will boast one of the game’s best infields in 2022.

That said, Story’s first season in Boston isn’t the only intriguing storyline in this talented infield. As we look ahead to Opening Day, here’s what to keep tabs on for the rest of the group.

At this point, we know what to expect from veteran shortstop Xander Bogaerts and slugging third baseman Rafael Devers. They’ve been two of the most consistent bats in the lineup over the last several seasons and there’s no reason that should change in 2022. Their defensive shortcomings, however, make their long-term futures a little more complicated.

Bogaerts’ lack of range at shortstop left many wondering whether he’d have to move over to second base. The 29-year-old posted minus-5 defensive runs saved in 2021. Still, he has no desire to change positions and manager Alex Cora is sticking with him at short despite the addition of Story.

That’s all fine and dandy to start this season, but what does it mean for Bogaerts in Boston for the long-haul?

With Bogaerts planning to opt-out after the 2022 campaign, there’s a strong chance this is his final run with the Red Sox, especially if he remains dead-set on playing shortstop. The Story signing gave Boston much-needed insurance should Bogaerts decide to move on. The writing seems to be on the wall.

Devers, like Bogaerts, hasn’t discussed a contract extension with the Red Sox. The 25-year-old is scheduled to become an unrestricted free agent after the 2023 season.

The big question with Devers is whether he can continue to improve defensively at third, or if he’ll have to switch to a first base or DH role. He’ll stick to the hot corner for 2022, but Chaim Bloom and Co. may have to consider making him the full-time DH when J.D. Martinez eventually departs.

Of course, given what we already witnessed with Mookie Betts, we can’t rule out another trade involving a Red Sox star in line for an expensive contract.

One of the Red Sox’ biggest strengths is they have a stable of guys willing to play anywhere on the diamond. None are more versatile than Kiké Hernandez, the super-utility man who was expected to be the team’s primary second baseman last season but instead spent most of his time in center field.

Hernandez was surprisingly stellar in center and helped make up for the absence of Gold Glover Jackie Bradley Jr. He’ll play more outfield again in 2022, but he’ll be ready to go when called upon to help out in the middle of the infield.

The player perhaps most affected by the Story signing is Christian Arroyo, who became a fan favorite during the 2021 campaign. He was penciled in as the starter at second base, but he made it clear he’s willing to do whatever it takes to help the team. In addition to being the backup second baseman, Arroyo will prepare to play some outfield and other infield spots.

“I’m a professional baseball player,” Arroyo said, via MassLive.com. “The way I look at it is I’m here to win. I’m here to win baseball games. … Having talented players is without a doubt one of the best parts about being part of the Red Sox. We have a bunch of talented guys here. But if you add a guy like Trevor Story, you’re adding another superstar caliber player. So for me, I’m here to play baseball. I’m here to win baseball games. Whatever I need to do, I’ll do it. Because for me, getting to experience the postseason last year was the greatest thing ever. And that’s where we want to get back to.”

Tomase: Bogaerts’ selfless recruitment of Story reaffirms his value to the Sox

Other depth options for the infield this season include Jonathan Arauz and Travis Shaw, who re-signed on a minor league deal this offseason.

With second base, shortstop, and third base set in stone, the primary battle will take place at first base. Bobby Dalbec has the job to begin the season, but he’ll have one of the top prospects in the game nipping at his heels.

Tomase: Can Bobby Dalbec be the answer at first base this season?

No. 2 ranked Sox prospect Triston Casas is expected to be called up to the big leagues at some point in 2022. If he is, and he lives up to his potential, it wouldn’t be a surprise to see him as the everyday first baseman by season’s end. However, since Dalbec and Casas hit from opposite sides of the plate, a platoon situation could make sense.

Dalbec hit lefties exceptionally well during his rookie season with a .877 OPS. Having him vs. southpaws and Casas against righties makes for a reasonable strategy when the two eventually share a spot on the roster. It isn’t a smart long-term move, but the Red Sox certainly can make it work in 2022.

It’ll be at least a couple of years before we see Marcelo Mayer in the big leagues. The 19-year-old, who was selected with the No. 4 overall pick in the 2021 MLB Draft, is set to begin the season in Low-A Salem. As the No. 1 prospect in the Red Sox’ system, his development will be worth monitoring throughout the year.

Red Sox 2021 1st round pick Marcelo Mayer is 2-3 so far in the High-A game. 1B to left-center in his first at-bat (video below) and 2B down the left field line in his third at-bat. Both hits off pitchers 3-4 years older than him. Really impressive first look. pic.twitter.com/l0jOErEFEz

Mayer is highly regarded for both his glove at shortstop and his left-handed bat. He provided Sox fans with a glimpse of both during last year’s stint in the Florida Complex League, but now comes the true test as he begins his road to The Show.

Also worth keeping an eye on is middle infielder Jeter Downs, who’s coming off a down season with Triple-A Worcester. Acquired from the Los Angeles Dodgers in the Betts trade, Downs will need a huge bounce-back season to have a chance at sniffing the major league roster. The Red Sox clearly still have faith in the 23-year-old as he was added to the 40-man roster in November.