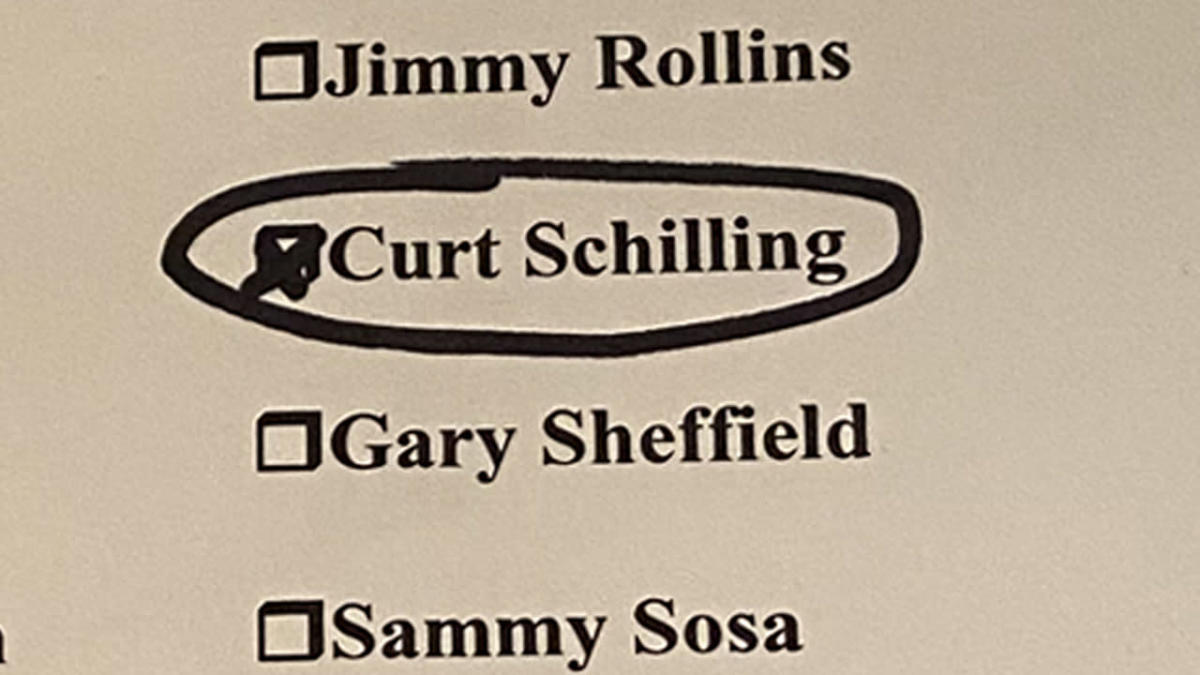 He wanted to be removed from the Hall of Fame ballot when he didn’t get in last year? I voted for him anyway.

Not that it made a difference. His pompous request to the National Baseball Hall of Fame last year appears to have cost him even more votes this time around, and he fell short again, along with Barry Bonds, Roger Clemens and Sammy Sosa, all four in their final years on the writers’ ballot.

Schilling was the only one from that group who got a vote on my ballot. The others did not for reasons made public repeatedly, including in a column on this site almost two years ago.

What about the “character” clause in the voting that some colleagues appear to have used to withhold their votes because of Schilling’s post-baseball use of his celebrity to amplify lunatic-fringe (my words) views such as QAnon conspiracy theories and support for the Jan. 6 insurrectionists?

How does considering “character” and “integrity” — as the Hall of Fame stipulates — reconcile against those views or that ugly “So much awesome here” tweet in 2016 he shared with a picture of someone wearing a shirt that said, “Rope. Tree. Journalist. Some assembly required”?

It’s not the only-if-you-believe-journalists-shouldn’t-be-hanged Hall of Fame.

It’s the baseball Hall of Fame.

And taking the Hall’s cryptic “integrity” and “character” guideline outside of that context — outside of the way someone played the game, the conduct on the field/in the clubhouse and how conduct off the field during a career reflected on the team and sport — risks a miscarriage of “integrity” of the ballot.

According to accounts from former teammates, Schilling wasn’t a favorite of everybody in the clubhouse. But even within that, it was more about eye rolls than anger or harm done. And the guy competed, won championships, did more to help his teams — especially in the biggest games — than most while compiling Hall-worthy numbers. And this: He was one of the few (along with Frank Thomas) to voluntarily speak out loudly to Congress against performance-enhancing drugs and to advocate for stricter measures for ridding the game of drug cheats.

Hell, the far more difficult decision involved Omar Vizquel, one of the best shortstops I’ve seen play in 25 years as a beat writer (four teams, both leagues) — and half of what’s easily the best middle infield I saw play (with Robbie Alomar in Cleveland).

He got my vote before revelations of domestic abuse arose 13 months ago, along with an MLB investigation and firing over the summer by the White Sox over allegations of sexual harassment of a batboy while managing in the minors.

I drew a very reluctant line at what he did during his playing career within the game and the “character” he at least seemed to embody then. Few colleagues seemed to agree, with Vizquel’s support plummeting by more than half.

Only two more players made my ballot, including Torii Hunter, a player I covered much of the first half of his career — a player unlikely to be elected but the kind of total-package player and influencer I would choose among the first two or three of anyone I’ve covered to build a winning team around.

The other is David Ortiz, whose link to the PED survey testing in 2003 was a big cause for hesitation.

He has denied that he took banned substances since a list of 104 players with positive tests was leaked in 2009, said he was “surprised” when the players’ union told him the report was true but also said he didn’t know what he tested positive for.

“You don’t know what anybody tested positive for,” he said Tuesday when asked about the list from 2003. “Then we started being drug tested [with public disclosure of positives], and I never failed a test. What does that tell you?”

Unlike Bonds, Clemens and Sosa, most of Ortiz’s career — and all 10 of his All-Star seasons and three championships — came after 2003, when testing was stepped up and penalties applied.

That created at least some reasonable doubt.

And given his enormous impact on the Red Sox franchise, baseball’s postseason history and every clubhouse he entered, that was enough to sway the vote in his favor.

Justin Braun with a Goal vs. New York Islanders

Commentary: Barry Bonds didn't make the Hall of Fame. Get over it.