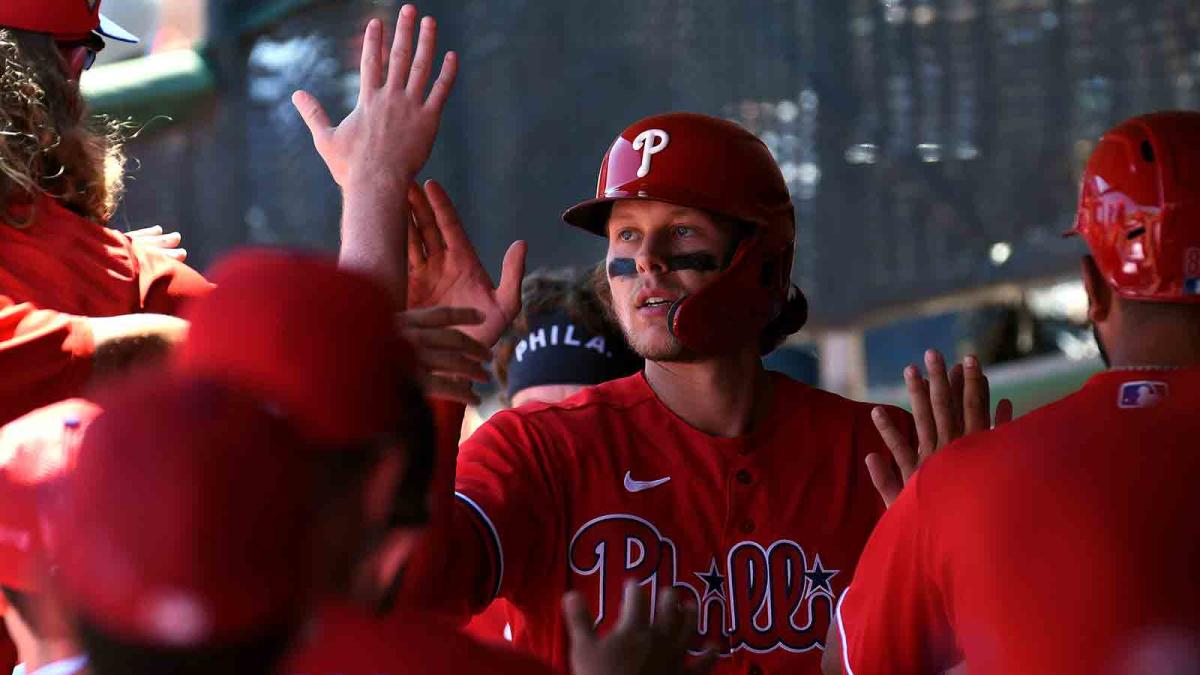 CLEARWATER, Fla. – The Phillies will bus south to Sarasota on Friday for a Grapefruit League game against the Baltimore Orioles.

With just a week to go before opening day and most of the team set, many of the regulars will stay back in Clearwater, get their work in, and call it a day just about the time the game in Sarasota gets going.

Alec Bohm and Bryson Stott won’t have that luxury. Both will make the trip to Ed Smith Stadium as the competition for the opening day third baseman’s job continues – and nears an end.

Stott has started at the position two days in a row and looks to have the edge. Manager Joe Girardi has said he wants to get a look at Stott at second base and this might be the day.

As for Bohm, he’s likely to get the start at third base.

The lineup won’t be posted until early Friday morning.

Stott had another good day in Thursday’s 5-3 win over the Yankees at windy BayCare Ballpark. He had a pair of hits to raise his spring average to .550 (11 for 20).

Bohm entered the game as a substitute for Stott and had a base hit in one at-bat. He is 3 for 22 on the spring.

Earlier Thursday, Bohm loaded up on at-bats in an intrasquad game at the minor-league complex. He did the same thing on Wednesday.

Before Thursday’s big-league game, Girardi suggested it was possible the club could carry both Stott and Bohm. Girardi said he believed both players were versatile enough that it would be possible to get both enough at-bats to keep their development trending upward.

But after the game, Girardi offered that Bohm was working on an adjustment at the plate and that adjustment might take some time to click.

“He and (hitting coach Kevin Long) have been working on a little adjustment in his stride,” Girardi said. “It’s starting to come and it takes time to make adjustments when you’ve done something year after year after year. We didn’t have a lot of time to work necessarily before camp so that’s why he’s taking a lot of at-bats (in minor-league games) and we think it’s going to translate and we believe it’s going translate big. We’re just not exactly sure when that time is going to be but he’s getting closer.”

It’s difficult to imagine a big-league club in win-now mode carrying a player who is working on a mechanical adjustment when that work could be done in a less-pressurized minor-league environment, but you never know.

The Triple A Lehigh Valley club will break camp on Friday and fly north. Girardi said that schedule would have no bearing on decisions being made in big-league camp.

“We still have competitions going on which is kind of weird, but it is what it is,” he said. “No disrespect to anyone but we’ve got to take care of this team first and then we’ll figure out the rest.”

The Lehigh Valley club opens its season on Tuesday.

Bohm and Stott aren’t the only two players Phillies officials will be watching closely Friday in Sarasota. Ranger Suarez will make his first start of the spring and likely pitch two innings.

The Phillies sent a number of players to the minors, including catcher Donny Sands, who was optioned. The leaves Garrett Stubbs as the backup catcher.

The Phils acquired Stubbs in an offseason deal with Houston, where he caught in 33 games over the last three seasons.

“He’s experienced,” Girardi said. “He’s a catch and throw guy and I like his swing, too.

“It’s not easy to be a backup catcher so your swing has to be short and simple and your defense has to be first.”

Tuukka Rask opens up about retirement decision: 'I have no regrets'