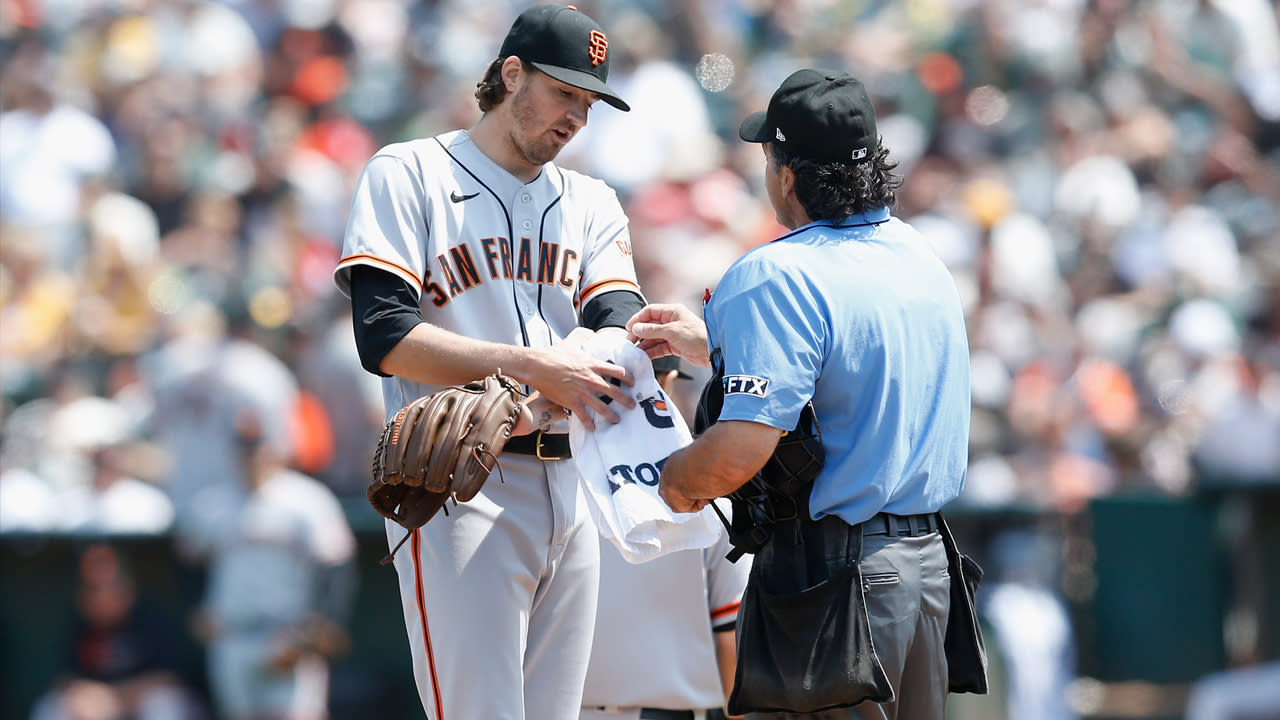 The sight of umpires checking pitchers for foreign substances as they come off the mound has become commonplace during MLB games over the last few months.

But during the Giants’ thrilling 6-5 comeback win over the Athletics on Saturday at the Oakland Coliseum, there was a new spin on the umpire checks, which started as way to rid the game of sticky substances.

Prior to the bottom of the second inning, home plate umpire Phil Cuzzi walked out to the mound and handed Giants starting pitcher Kevin Gausman a towel.

Gausman proceeded to wipe his left forearm before handing the towel back to Cuzzi.

After the win, Giants manager Gabe Kapler explained what the interaction between Gausman and Cuzzi was all about.

“Pitchers are no permitted to put rosin anywhere but on their pitching hand, and Gaus has a little bit of a habit to put rosin on his forearm,” Kapler said. “I thought Phil handled it great. He said ‘You need to wipe that off.’ And Gaus just mindlessly puts rosin there as a way to dry his arm, but I thought Phil did a great job. Just reminded him he can’t do that, told him to wipe off the rosin and that was that.”

Gausman, who was one of the best pitchers in baseball prior to the All-Star break, struggled again Saturday, managing to last just 3 2/3 innings against the A’s.

Hurt by a first-inning error that led to three unearned runs, Gausman allowed six hits, five runs, two earned runs, walked one and struck out five. He threw 82 pitches, 59 of which were strikes.

“Not his best outing. I’m sure you’ll talk to Kevin and he’ll tell you the same,” Kapler said. “Casali said the split was fine and it was improve, to some degree. He wasn’t getting as many swings and misses as we’d like and obviously that leads to foul balls and deeper counts, which is why he was running a high pitch count there when we had to go get him with Jarlin.”

RELATED: How Wade Jr. came through in the Giants’ win over the A’s

Gausman finished the first half of the season with a 1.84 ERA, but in seven starts since then, it has risen to 2.47.

“I definitely haven’t been as sharp as I was early in the season,” Gausman said after the game. “My split still is really good, but I feel like it hasn’t had that extra little bite towards the end. So whereas I usually get a swing and miss, maybe I’m getting more foul balls. The book is out on me. I think guys know what they are going to get, so if I’m not on, they can do a good job of fouling pitches off.”

The Giants have known for several weeks that they need to get Gausman’s struggles figured out. With a playoff spot almost assuredly secure at this point, they have time to get things ironed out. But the sooner the better if San Francisco wants to hold off the Los Angeles Dodgers in the NL West race.

Offensive woes haunt Mets in another close loss to Dodgers: 'We just can’t finish what we start'