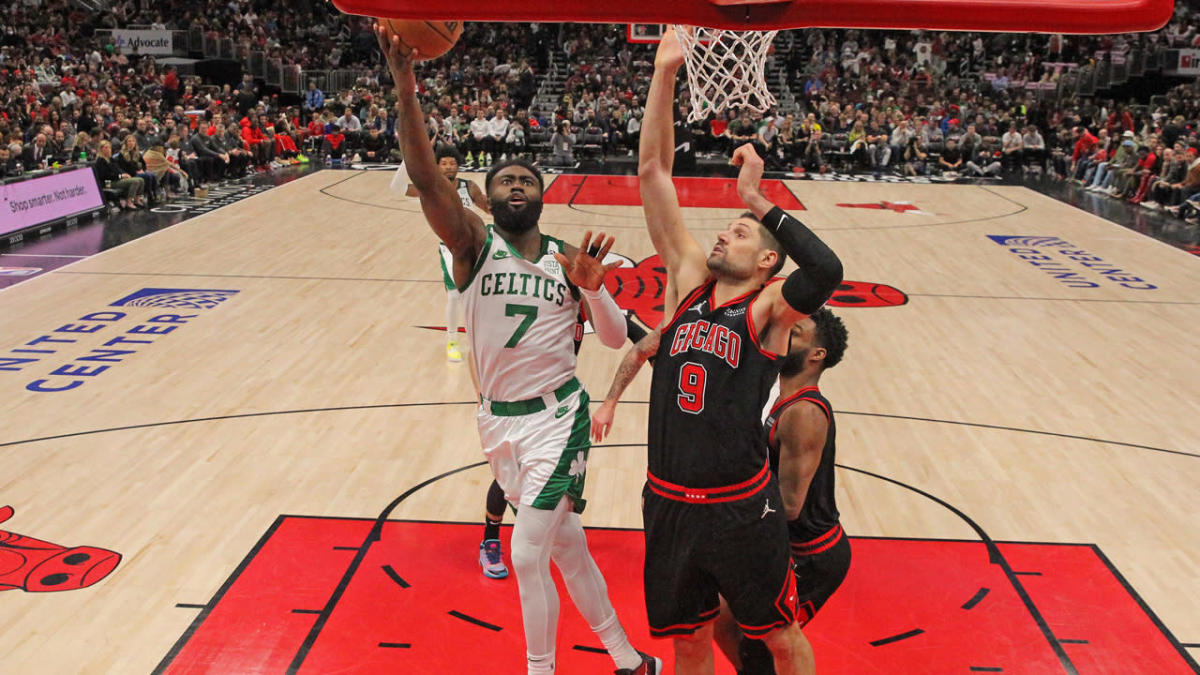 That was the vibe of the Chicago Bulls’ 117-94 loss to the Boston Celtics at the United Center on Wednesday, the team’s 13th loss in 14 tries against the Eastern Conference’s current top four seeds.

“We look like a totally different team right now (than earlier in the season),” Zach LaVine said. “And it’s upsetting.”

As for answers? LaVine had none. And the Bulls are running out of time to find them.

1. When the Bulls bounced the Celtics in Boston with a second-half rally in November, Marcus Smart spent his postgame media session calling out his teammates — primarily, Jayson Tatum and Jaylen Brown — to move the ball more.

That’s been an improvement area in their second half of the season surge. And it showed on Wednesday.

The Celtics carved the Bulls’ defense to the tune of 67 points, 20 assists (against four turnovers) and 57.8 percent shooting (9-for-18 from 3) by halftime. The second half was a tad more muted, but the end result was a 23-point victory all the same, and Donovan’s postgame comments once again on an inability to contain the ball at the point of attack.

2. The Bulls, meanwhile, endured their share of sloppiness at the offensive end. Despite shooting well from inside the arc, they fell behind early on the strength of some mishandled passes and bricked 3-point looks. They entered the halftime locker room down 16, and with more turnovers (10, off which Boston scored 14 points) than assists (eight).

3. The shooting woes Donovan has bemoaned since the All-Star break also continued. The Bulls’ 7-for-23 (30.4 percent) line from deep not only paled in comparison to the Celtics’ 17-for-37 (45.9 percent), it also marked the sixth time in seven games they have failed to make double-digit 3s. The one exception: When they hit exactly 10 in an overtime win over the Clippers.

4. DeMar DeRozan was a saving grace for a time. He scored 15 points on 6-for-9 shooting in the first half, keeping the Bulls within striking distance until midway through the second quarter. But he then missed seven straight field-goal attempts out of the halftime locker room, which coincided with the Celtics’ game-sealing run.

5. DeRozan also faced a massive size mismatch trying to defend Al Horford, which resulted in an easy post-up bucket and a few offensive rebound snatches. The Celtics pulled down seven offensive boards as a team.

That, in addition to the Bulls’ need for size on the perimeter, undoubtedly played a role in Donovan turning to a double-big lineup featuring Nikola Vučević and Tristan Thompson in the third quarter.

6. LaVine suited up after missing Tuesday’s Bucks matchup to knee soreness, but didn’t provide much in his 27 minutes. He scored seven points and shot 0-for-5 from 3-point range, and was — wisely — not called upon again after checking out late in the third quarter. Donovan effectively waved the white flag down 23 points with 8:32 to play.

7. Patrick Williams stuck in the starting lineup with LaVine (knee) returned and Alex Caruso (back) sidelined. Williams has been a bright spot in the Bulls’ last three games — averaging 13.3 points, eight rebounds and 1.3 blocks — but struggled in this one. Not only did he score just five points, he also gave ground in matchups with Tatum and Brown, picking up four fouls before halftime. That impacted his playing time.

8. Another ripple in Caruso’s absence: Derrick Jones Jr. remained in Donovan’s nine-man rotation, playing 23 minutes. He was effective at the defensive end in the first half along with Javonte Green, who both played a role in Jayson Tatum struggling to a 3-for-10 shooting start.

But Jones also missed all four of his 3-point attempts, each of which were clean opportunities.

9. In a bizarre development, the Celtics missed eight of their first 15 free-throw attempts, finishing the game 14-for-22. Caruso’s absence aside, the fact that the Bulls couldn’t keep this one competitive given that anomaly, and Tatum’s 5-for-18 night, was telling.

In fact, they’re the only playoff team below +2 (points per game) in that category. It’s the first night of the season the Bulls’ point differential has skewed negative.

Next up: Home for the Hornets on Friday.

Tanner Pearson with a Goal vs. Vegas Golden Knights

Tyler Toffoli with a Goal vs. Anaheim Ducks