In the upcoming season, Michael Porter Jr., Zion Williamson, Shai Gilgeous-Alexander, Kevin Porter Jr. and Zach LaVine possess top-five odds. With a total of five award winners, the Indiana Pacers and Orlando Magic are tied for having the most players to win the NBA Most Improved Player Award in league history. The odds down below were taken from Bovada. 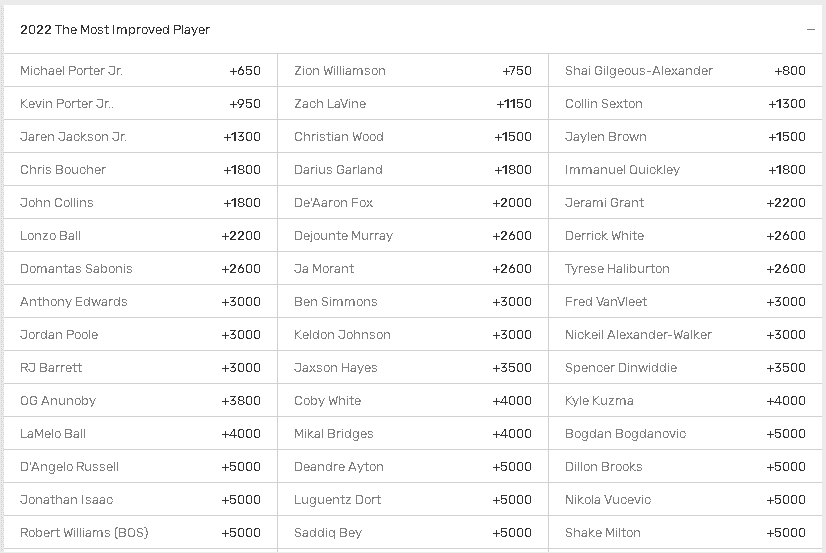 Power forward Zion Williamson is another top contender for the award. The former Duke Blue Devil was selected first overall by the New Orleans Pelicans in the 2019 NBA Draft. In the 2020-21 season, in 61 games played, Williamson averaged 27 points, 7.2 rebounds and 3.7 assists per game. The 6’7” forward also had a field goal percentage of 61.1%, and he shot 29.4% from behind the arc.

His performance last season earned him his first All-Star selection of his NBA career. According to offensive win shares, he is the MVP of the Pelicans. His estimation was 7.1, ranking third overall in the league. Based on offensive production, this statistic is the estimated number of wins contributed by an individual player.

Guard Shai Gilgeous-Alexander is a third-year player. He was selected 11th overall by the Charlotte Hornets in the 2018 NBA Draft. Though, he was immediately traded to the Los Angeles Clippers. In 35 games played last season, he averaged 23.7 points, 4.7 rebounds and 5.9 assists. Shooting-wise, the 23-year-old shot 50.8% from the field and 41.8% from three-point range.

Moreover, the Canadian has improved each season in the NBA. In his rookie season, while playing for the Clippers, he averaged 10.8 points, 2.8 rebounds and 3.3 assists per game in 82 games. Gilgeous-Alexander then averaged 19 points, 5.9 rebounds and 3.3 assists in 70 games, in the 2019-20 season. While the Oklahoma City Thunder have a lot of problems, Gilgeous-Alexander is stepping up his performance each season.

Shooting guard and small forward Kevin Porter Jr. is another top candidate. The 21-year-old was selected 30th overall by the Milwaukee Bucks in the 2019 NBA Draft. Though, the former USC Trojan was later traded away to the Cleveland Cavaliers. In 26 games played last season, Porter Jr. averaged 16.6 points, 3.8 rebounds and 6.3 assists. He also averaged a field goal shooting percentage of 42.5%. To add to this shooting statistic, he shot 31.1% from beyond the arc as well.

However, he missed several games last season due to an ankle injury. Not to mention, Porter Jr. missed time for violating the NBA’s health and safety protocols, regarding COVID-19. In his rookie season on the Cavaliers, he averaged 10 points, 3.2 rebounds and 2.2 assists per game in 50 games played. Therefore, he has improved, but how many games will he play in the 2021-22 season? Porter Jr. might not be as dependable as the other players listed here.

Expectations are high this season for guard Zach LaVine. The 26-year-old was selected 13th overall by the Minnesota Timberwolves in the 2014 NBA Draft. LaVine has played his past four seasons with the Chicago Bulls. He will have the chance to play alongside DeMar DeRozan in the upcoming season, too. The seventh-year player averaged 27.4 points, 5.0 rebounds and 4.9 assists per game last season. Furthermore, LaVine shot 50.7% from the floor and 41.9% from behind the arc.

Based on points alone, he has refined his skills each season. LaVine averaged 23.7 points in the 2018-19 season, whereas he averaged 25.5 points in the 2019-20 season. His progression is duly noted. Because of his impressive performance in the regular season, the guard earned his first All-Star selection of his NBA career last season. With 200 made field goals in the 2020-21 season, he ranked ninth overall.

The only thing holding back Zion Williamson in the upcoming season is a major injury. Last season, he missed time after sustaining a fractured left ring finger. Also, he missed time during the 2019-20 season due to soreness in his right knee. While these were not season-ending injuries, players have to perform at a high level on the court to win basketball-related awards.

Considering all the other players listed above, Zach LaVine could be Williamson’s greatest competition for the 2022 NBA Most Improved Player Award. Aside from the 2017-18 season, LaVine has remained healthy and consistent since 2014. Either player is a solid pick to win the award in 2022.

The BitCoin Sports Welcome Bonus helps gamblers earn a 75% bonus up to $750 with the Bovada bonus code: BTCSWB750. Bovada is not available in Delaware, Nevada, New Jersey and Maryland. There are three important steps to claim this bonus code.

1.) Create your own username. This will require a first name, last name and date of birth.

3.) The user is then required to verify his or her age and enter a zip code. Lastly, click the red “REGISTER” box. Enter the bonus code when making a deposit. A deposit can be made via Bitcoin or Bitcoin cash. VISA and Mastercard are other payment options.

Pelicans' Zion Williamson has surgery on fractured right foot, expected back 'in time for the regular season'

Is this the Wizards’ best chance to win on the road vs. the Spurs since 1999?

Is this the Wizards’ best chance to win on the road vs. the Spurs since 1999?