The 2021-22 NBA season begins on Tuesday, October 19, 2021. Preseason begins on October 3rd. According to oddsmakers via Bovada, Bradley Beal from the Washington Wizards is the favorite (+250) to lead the league in points per game in the upcoming season. Luka Doncic from the Dallas Mavericks has the second-best odds (+400) of becoming the PPG leader, followed by Stephen Curry from the Golden State Warriors (+600) and Damian Lillard from the Portland Trail Blazers (+600).

The biggest betting factor involving professional sports leagues is the ongoing COVID-19 pandemic. After testing positive for the coronavirus, Beal had to bow out of the 2020 Tokyo Olympics. Of course, the NBA’s rules for the 2021-22 season will also favor vaccinated players. One week ago, NBA Commissioner Adam Silver announced vaccination requirements for all of the league’s referees. These odds listed above and below are assuming these players will remain healthy throughout next season.

In the 2020-21 season, Beal averaged 31.3 points, 4.7 rebounds and 4.4 assists in 60 games played. Statistically, the 28-year-old shooting guard had the best season of his career scoring-wise. This explains why he is the current frontrunner, per Bovada’s oddsmakers. However, regarding points, the three-time All-Star did not finish in first place last season.

Stephen Curry led the league in points last season. In 63 games played, the 12-year veteran averaged 32 points, 5.5 rebounds and 5.8 assists per game. Similar to Beal, Curry also had the best season of his career. Before last season, Curry had not averaged at least 30 points per game since the 2015-16 season. That was the season the Warriors concluded their regular season schedule with a record-breaking 73-9 (.890) finish. However, the team lost in Game 7 against LeBron James and the Cleveland Cavaliers in the 2016 NBA Finals.

Luka Doncic has the second-best odds because he’s the points master on the Mavericks. The two-time All-Star has proven that he can carry the team through thick and thin. In 66 games played in the 2020-21 season, the 22-year-old guard averaged 27.7 points, eight rebounds and 8.6 assists per game. Under new head coach Jason Kidd, it makes sense why some gamblers are hesitant to place a bet on Doncic.

Who is the best bet?

Bettors cannot go wrong picking Curry, Beal or Doncic. These players are the best available options. They have each proven their worth at the top of the points leader odds. Though, does one specific player have an edge over all the others? Well, Curry is playing for a team that possesses the fourth-best odds (+1000) of winning the 2022 NBA Finals. The guard has better teammates. This is elevating expectations, and bettors should know by now that Curry is a clutch player under high-pressure situations. Based on all the available statistics, as stated before, the guard has reached a season-average 30 points per game only twice in his 12-year career.

Moreover, Beal will likely remain on the Wizards for the next few seasons, but he no longer has Russell Westbrook to help assist him. On the flip side, Beal now has Kentavious Caldwell-Pope, Montrezl Harrell and Kyle Kuzma. There are times when less is more, especially when considering player prop bets. Beal has averaged at least 30 points per game the past two seasons. As for Doncic, the guard has yet to crack a season-average 29 points per game. In the 2019-20 season, he did average 28.8 points per game, though. With all things considered, think about picking Curry to lead the NBA in points. Taking a risk can pay off. 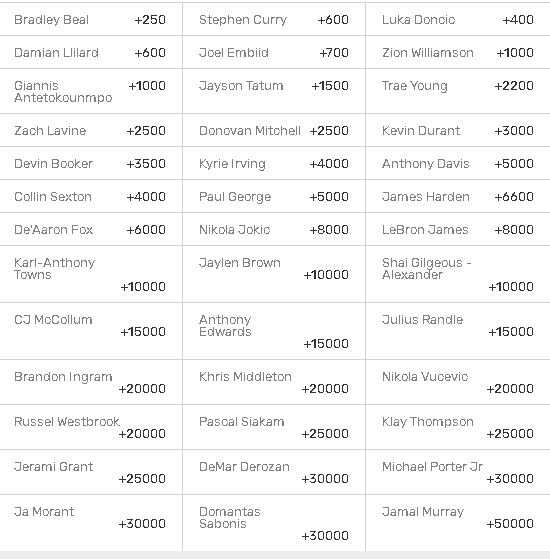 Padres’ All-Star Tatis Likely to Have Shoulder Surgery in Offseason