Per oddsmakers at Bovada, seven-time All-Star Stephen Curry is the number one favorite to lead the NBA in three-pointers made per game in the upcoming 2021-22 NBA season. Possessing -165 odds, the Golden State Warriors guard is the frontrunner on the projected statistics board, followed by Damian Lillard (+250), Buddy Hield (+500) and Duncan Robinson (+1200). Last season, in 63 games played, Curry averaged a career-high season average 32 points per game, along with 5.5 rebounds and 5.8 assists per game. There is a laundry list of logical reasons why Curry is always the favorite.

Damian Lillard has the second-best odds (+250) of leading the NBA in three-pointers made per game next season. In the 2020-21 season, the six-time All-Star averaged 28.8 points, 4.2 rebounds and 7.5 assists per game. Not to mention, the point guard shot 45.1 percent from the floor and 39.1 percent from behind the arc. The nine-year veteran had the second-highest three-point average of his career last season. Lillard ranked third in the NBA in three-point field goal attempts (704) and made threes (275) last season on the Portland Trail Blazers.

Now, considering the guard’s future is up in the air right now, he might not be the best pick this time around. The Trail Blazers still have top-four odds of trading for Ben Simmons from the Philadelphia 76ers. While Lillard will likely remain an All-Star playing elsewhere, trade rumors gossip creates an unnecessary distraction. A couple of weeks ago, the guard reiterated on Instagram that he never requested a trade and wants to remain in Portland. He could be moved via an in-season trade next season. This is something to think about.

Hield finished his performance last season with 282 made three-point field goals, ranking second overall in the league. Plus, the Sacramento Kings guard ranked second in three-point field goal shot attempts (721). Much like Curry, he has great odds of becoming the leader in threes next season. Between Hield and Lillard, the former is the better option. This is a fair bet. 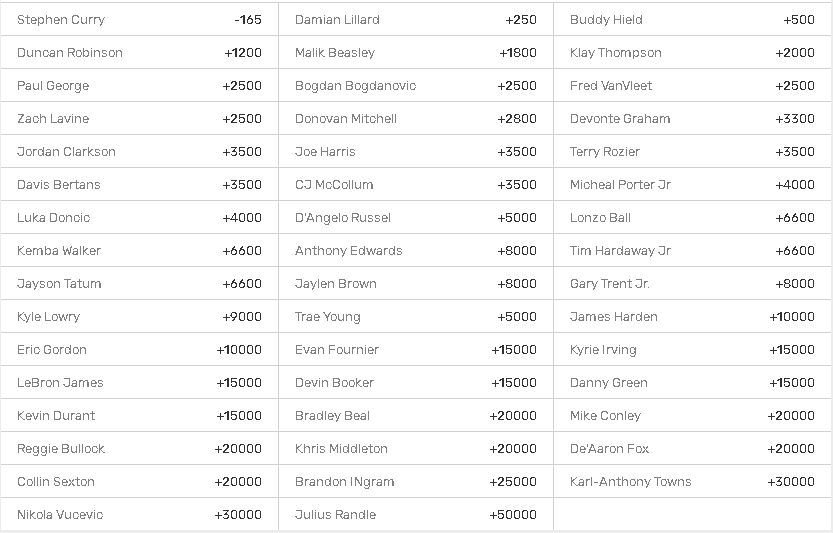