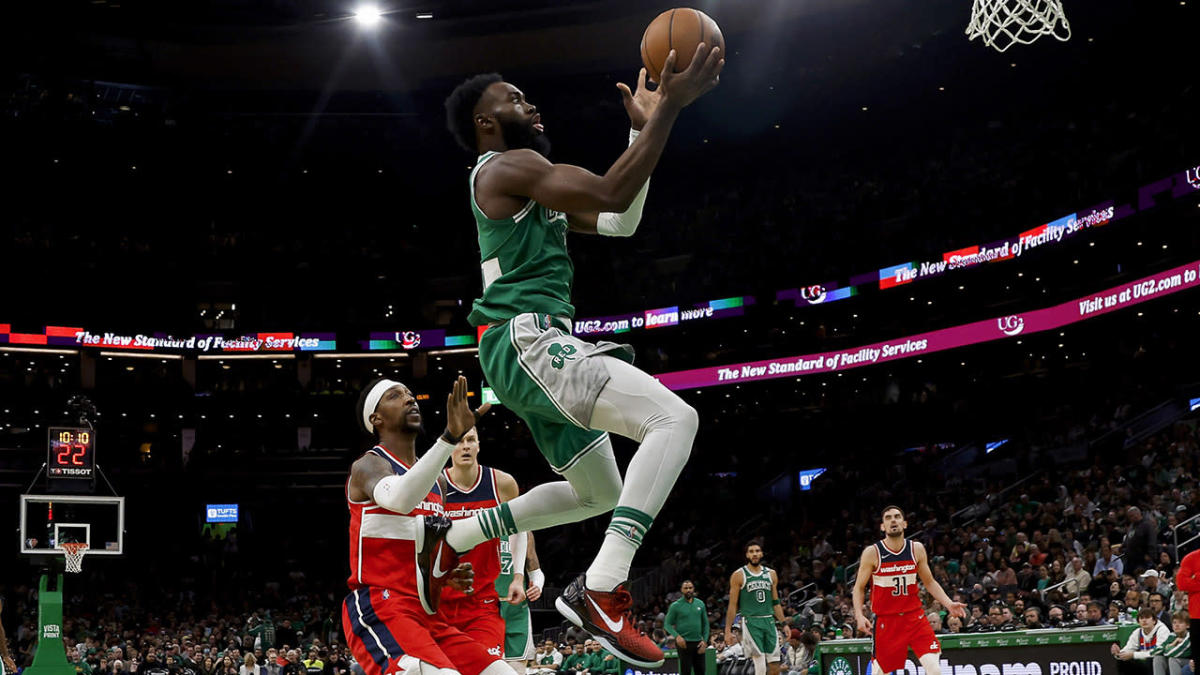 When the Boston Celtics touched down in the nation’s capital on January 22, they sat one game under .500 and were clinging to the final play-in spot while owning the 10th-best record in the Eastern Conference.

Since that day, the Celtics are an NBA-best 26-6. A surge that started with Jayson Tatum lighting his personal second-half fuse with a 51-point outing against the Wizards culminated Sunday with Boston shredding that same Washington squad for 39 assists in a 42-point thrashing at TD Garden.

With help from Sunday’s shellacking, the Celtics now own the best offensive, defensive, and net rating in the NBA over the past 70 days. No one has even been close to touching the Celtics on the defensive end as Boston is 4.3 points per 100 possessions better than the next closest rival (Miami). Boston’s plus-15.5 net rating is a staggering 5.7 points better than the next-best squad (Memphis).

But the real surprise is that Boston’s offense has shuffled up to the top spot in that span, muscling in front of the Timberwolves after Sunday’s action.

Boston’s offensive rating is 119.8 over that 32-game march. Before the Celtics started surging in Washington, the team had an offensive rating of 108.7 over its first 47 games. Boston’s mark over these last 32 games is 3.5 points better than Utah’s league-leading mark for the season.

Here’s the important part: Boston’s second-half dominance has shimmied the team to eighth in offensive rating for the season. Just about every title contender for the past two decades has required a team to be inside the top 11 in both categories to be a legitimate contender. The Celtics easily check those boxes now, especially with the NBA’s best defense.

It honestly feels like Boston has played two distinct seasons, beginning with an infuriating first campaign in which the Celtics were at times unwatchable because of injuries, bad habits, and a propensity to kick away winnable games.

The last 32 games have been the complete opposite, with Boston routinely beating the tar out of opponents and becoming the sweetheart of all analytics models, many of which now project the Celtics to represent the Eastern Conference in the NBA finals.

To be sure, there are still questions to be answered. Last weekend, we wondered out loud about Boston’s ability to withstand injuries and whether its crunch-time offense would hold up in a playoff setting. Robert Williams suffered a meniscus tear that will likely sideline him until Round 2 of the playoffs and Boston’s offense sputtered late in a showdown with the East-leading Heat. Whatever comes next will not look nearly as easy as much of the past 10 weeks.

But the reality is that if Tatum and Jaylen Brown are playing to their recent level — their playmaking skills blossoming to fuel Boston’s offensive emergence — then this team can compete with anyone. Getting Williams back in Round 2 would reunite a starting five that has maintained an impossibly stingy defensive rating of 97 this season while dominating opponents on both ends.

Few could have seen this coming. Though Brown deserves credit for suggesting that “the energy is about to shift,” even if he was simply banking that Mercury’s retrograde could salvage the season.

Now, Brown suggests the stars are aligning for a playoff run.

“If you look back on my comments early in the season, I never lost faith. I know things seemed to be bad but I was always optimistic,” said Brown. “It’s relieving to be at this point, where everyone sees what I saw from the start. I think we still have a lot of room to grow — the stars are aligning. I just think we need to take care of business, come out, don’t be too distracted and take care of it one game at a time.”

The Celtics are essentially on one of the more historic 30-plus-game runs in NBA history. They’ve outscored opponents by 479 points over the past 32 games. The next closest team is the Grizzlies at plus-316. Boston’s numbers are undoubtedly juiced from lopsided wins but this dominance appears far from a fluke.

Just about every title contender for the past two decades has required a team to be inside the top 11 in both (offensive rating and defensive rating) to be a legitimate contender. The Celtics easily check those boxes now, especially with the NBA’s best defense.

The biggest remaining question — and one that is still unanswerable given the logjams throughout the East standings — is how the conference seedings will shake out. The Celtics woke up Monday morning with heaviest odds (52.1 percent) of landing the No. 2 spot based on Basketball-Reference’s daily simulations of the remainder of the season.

Alas, B-R cannot accurately measure late-season motivations, and there is the very real chance that teams will pick spots to rest players over the final week of the regular season (though a nearly full week off for all play-in avoiders could encourage teams to keep their foot on the gas at the finish line of the regular season). Essentially, Boston’s Thursday night visit to Milwaukee should go a long way towards deciding the No. 2 spot in the East.

If Boston lands that No. 2 spot, it would not immediately know its first-round opponent. The winner of the East’s 7 vs. 8 play-in game would earn the No. 7 seed and set up that first-round joust.

Entering the final week of the season, the odds favor a Cavaliers-Hawks battle in that matchup, which would be encouraging news for any Celtics supporters eager to avoid the Nets in Round 1. The Nets currently project with only a 27.2 percent chance at landing in spots 7 or 8.

One week to go. Three games. Here are the Celticsâ current seeding probabilities from @bball_ref:

The Celtics have been so dominant the past 10 weeks, it’s probably not worth sweating how the play-in tournament shakes out. The absence of Williams complicates matters but the Celtics should be the better team in Round 1 regardless of who emerges from the play-in bracket or otherwise.

The bigger consideration over the final week is the value of the No. 2 seed. Earning home court in a potential Round 2 matchup against either Milwaukee or Philadelphia could be quite valuable for Boston, especially given the boost that role players tend to enjoy at home (and the Celtics’ bench enjoyed that home cooking with an offensive eruption on Sunday against Washington).

No one on the Celtics roster is content with simply having a remarkable second-half turnaround. There is work to be done. There hasn’t even been time to sit back and savor the improbability of this 180. But it’s still wild how things flipped.

How do 2022 NBA Draft Lottery odds look for the Wizards?