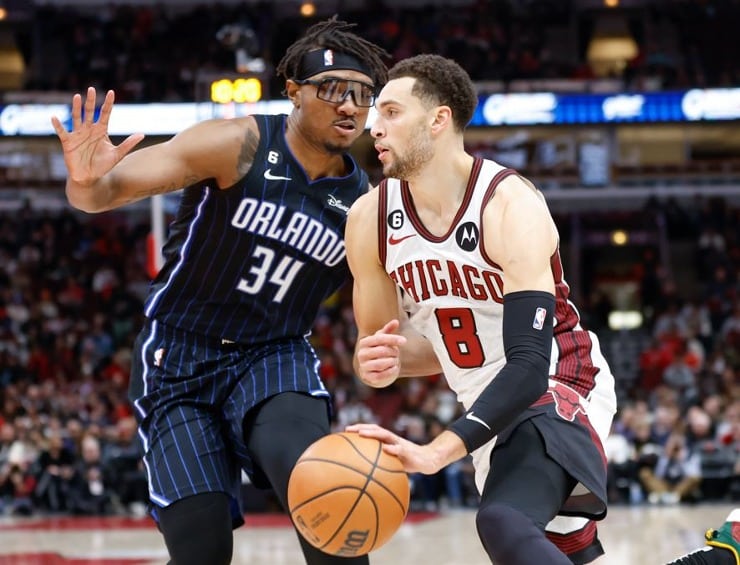 Chicago Bulls guard Zach LaVine was benched for the final 3:43 of Friday night’s 108-107 home loss to the Orlando Magic. He addressed coach Billy Donovan’s decision after the game.

“I got to do a better job at the beginning of the game to make my shots, but you play a guy like me down the stretch,” said LaVine.

Per multiple NBA betting sites, the Bulls possess the 11th-lowest odds to win the championship in 2023. Check out which sportsbooks are showing higher odds for the Atlanta Hawks and Toronto Raptors.

Zach LaVine: Do I like not playing late in the game? No. I think I should be out there even though I’m not hitting shots. But that’s Billy’s call.

Emphasizes he’ll talk to Billy about his decision to bench him in the final minutes of the 4th quarter. @itsthebigs pic.twitter.com/JY3wtRtYHZ

“That’s what I do,” continued the Bulls guard. “Do I like the decision? No. Do I have to live with it? Yeah. Be ready to put my shoes on and play the next game.”

Donovan also had LaVine on the bench from six minutes remaining in the third quarter to 8:50 left in the fourth quarter. With the two-time All-Star off the court, the Bulls cut their 16-point deficit to four points.

However, the Bulls went on to drop their fourth consecutive game. LaVine struggled all across the board. In 26 minutes, the 9-year veteran finished with 4.0 points, 5.0 rebounds, and 2.0 assists. Plus, he shot 1-of-14 (7.1%) from the floor and missed all five 3-point attempts.

“I feel like my job, my responsibility in those moments is to try to make the best decisions for the team,” Donovan said after the loss. “And I thought that was the best decision at the time.

To me, I don’t look at it as anything else but the one-off game where this is what was going on. I know he wanted to be out there. There’s probably not very many games in his career where [LaVine] hasn’t been out there in those moments, but that group was playing well, and it gave us a chance.”

Some Bulls fans think Donovan should have left LaVine in the game.

The Magic shot an impressive 42.9% from 3-point range. And Orlando’s Wendell Carter Jr. scored a team-high 21 points. DeMar DeRozan led the Bulls in scoring with 41 points.

“We just can’t keep putting ourselves in a hole playing down 17, 19 points,” DeRozan added. “It’s too tough. The margin of error is slim to try to make a comeback. You almost have to play perfect to win a game like that.”

Based on his stats so far, Friday night’s performance was probably a fluke. The Bulls guard has recorded eight 20-point games since the season began. Then again, LaVine’s true shooting percentage this season is 54.1%, his lowest since the 2019-20 season.