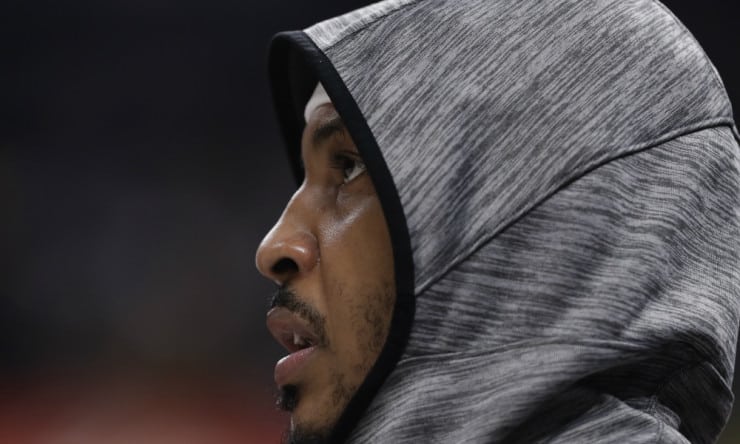 The Los Angeles Lakers picked up their first win of the NBA season Friday night, defeating the Memphis Grizzlies 121-118. The player of the game? 37 year old Carmelo Anthony, who was playing in just his third game as a Laker.

That three was part of his 28 point performance, which lead the way for the Purple and Gold. Not too long ago Melo was sitting at home with there being legitimate questions of if he was going to play in the NBA again. The Portland Trail Blazers led the way in bringing him back. Melo showed he still had quite a bit left in the tank.

Now he is playing alongside his close friend LeBron James for the Los Angeles Lakers with real title aspirations. It only took until the third game for vintage Melo to show up. That was the perfect time to get the Lakers that first win. It’s also a reminder to everyone that he still knows how to get buckets. Just like he did for all those years in New York and in Denver.

As recent years have seen Carmelo transition into a role player following many years in the league as a legit superstar, it was nice to see him go get it all night like he did for so many years. Add in that he climbed one step higher on the all time scoring list during the performance and it’s a good time to remind ourselves that very few people have ever been able to do what he could do on the offensive end of the court.

Even at 37 years old he seems to have quite a few more buckets left in him. Let this serve as a reminder to appreciate those buckets because we almost lost Carmelo from the league not too long ago. What a story it would be if he could continue to go north of 25 minutes per contest and potentially compete for the Sixth Man of the Year Award?

That’s far ahead. Melo already has a lot of things to look ahead to. One of which is Shaquille O’Neal himself, who sits at the 8th spot on the all time NBA list.

Carmelo Anthony is a future Hall of Famer with his resume as is, although by the looks of it, he is going to keep adding to that resume moving forward. That could be big for the Lakers, as well.

Dansby Swanson turning into a true hometown hero in Atlanta

ATLANTA — Dansby Swanson, whose scar over his left eye is finally starting to heal, looked across the Truist Park interview room late Saturday night, trying to put it all into words without crying. Swanson, 27, was born and raised in these parts, a true Atlantan, through and through, who dreamed of this moment since […]

Who’s Playing San Antonio @ Golden State Current Records: San Antonio 7-13; Golden State 19-3 What to Know The Golden State Warriors are getting right back to it as they host the San Antonio Spurs at 8:30 p.m. ET Dec. 4 at Chase Center. After these two teams made easy work of their previous opponents, […]

This content is not available due to your privacy preferences. Update your settings here to see it. Tottenham vs Norwich: Spurs could find themselves 4th in the Premier League table (with a game in hand) by the end of matchweek 15, if they can beat the Canaries at the Tottenham Hotspur Stadium on Sunday (Watch […]