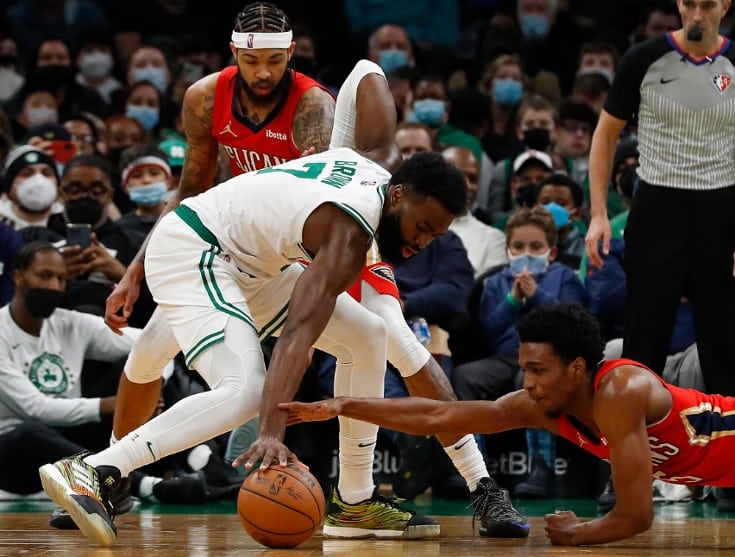 In Saturday night’s interconference rematch, the Boston Celtics (25-25, 23-26-1 ATS) are facing off versus the New Orleans Pelicans (18-30, 22-25-1 ATS); NBA picks are featured here. Will Brandon Ingram and the Pelicans earn their first win against the Celtics this season? In addition to the starting lineups, our top NBA picks and betting trends are posted below.

All Celtics vs Pelicans betting odds can be found at BetOnline

Furthermore, in the Celtics’ 108-92 road loss versus the Hawks on Friday, guard Jaylen Brown added one more double-double to his career total. He accumulated 26 points, 12 rebounds and 3.0 assists in 35 minutes on the court. Forward Jayson Tatum ended his performance with 20 points, 6.0 rebounds and 4.0 assists in 36 minutes played as well. Boston has won six of its last 10 games. Following this loss on the road, the C’s are now 9-15 away, 16-10 at home and 12-12 ATS on the road this season.

As for the Pelicans, on Friday, in their 116-105 home loss against the Nuggets, forward Herb Jones scored a team-high 19 points in 37 minutes of action. Center Willy Hernangomez closed out his night with another double-double, amassing 18 points, 16 rebounds and 3.0 assists in 33 minutes played. New Orleans has won five of its past 10 contests. The team is 11-12 at home, 7-18 away and 13-9-1 ATS at home.

According to ESPN’s Basketball Power Index, the Celtics have a 65% chance of winning.

In other news, in the Pelicans’ loss to the Nuggets, guard Devonte’ Graham injured his left knee in the fourth quarter. He was sent to the locker room. The fourth-year player is listed as questionable versus Boston. Thus far, in a total of 43 games played this season, he’s averaged 14 points, 2.6 rebounds and 4.5 assists per game.

Devonte’ Graham looks like he’s coming out of the game. He hurt his left knee earlier in the 4th quarter. Appeared as if it started bothering him again. He’s headed to the locker room.

Moreover, the C’s have the healthier roster, too. Pelicans’ forward Zion Williamson remains out indefinitely. He is still recovering from his foot injury. The only players the Celtics have out are PJ Dozier, who is out for the remainder of the season, and Bol Bol. All things considered, pick the Celtics to bounce back, they will cover the spread and the total will go under 215. If you have never placed a bet, read our handicap betting guide. Other NBA Picks are on the main page.

Knicks takeaways from Friday's 123-108 loss to Bucks, including Julius Randle's latest down night