Chris Paul loves basketball more than anything, and as a high school player, his younger self focused less on dating or having a girlfriend.

Paul cared more about improving as a basketball player than having a romantic relationship. He felt married to the sport per se.

In an interview with Fadeaway World, Paul opened up about his high school dating life — or lack of one — while at West Forsyth High School. Let’s just say it’s not exactly what his fans were expecting.

Though, plenty of young basketball stars care about their futures. Perhaps he wasn’t alone.

During the interview, Paul explained: “You got a boyfriend? How old are you? 14? Ok, so y’all been on the phone talking all night? You don’t even have a phone? Ok. Well, listen. I understand, I’m not mad at you.”

“Does anybody know how many girlfriends I had when I was here? 1? Nope. 4? Damn, I appreciate it, but not quite… None, exactly, none, and I tell people all the time my girlfriend was my basketball, that was my girlfriend.” 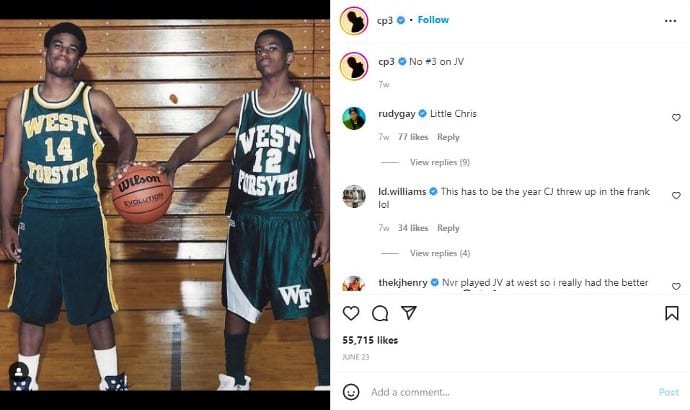 “But this is the thing, too, at your guys’ age, what do you have to talk about?” Paul continued. “Especially if your boyfriend and girlfriend go to school here.”

“You ain’t got that much to talk about so you’re sitting on the phone all night listening to each other breath. I had a plan, I didn’t have time to have a boyfriend or girlfriend, or walk seeing people hug, that’s disgusting. Go to class…”

While kind of harsh, he’s correct. All dreams have to be protected. Nothing could keep Paul away from his favorite sport.

In 2003, Paul was the No. 1 ranked guard in North Carolina. In his junior year at West Forsyth High School, the guard averaged 25 points, 5.3 assists and 4.4 steals per game.

Nathanial Jones, Paul’s 61-year-old grandfather, was murdered during his senior year. To honor his grandfather, he scored 61 points in a game, 6 points shy of the state record. Paul intentionally missed a free throw to remain on the exact number. Then, he asked coach David Laton to be taken out.

As one of the top high school prospects, Paul also ranked No. 2 at his position in the entire nation. He committed to Wake Forest as a five-star recruit.

At the college, he met his future wife, Jada Crawley. The Winston-Salem native married Crawley on September 10, 2011. So, everything worked out in the end. Not everyone needs a dating life in high school.

After two college seasons, he was ready to play professional basketball. Chris Paul was selected fourth overall by the New Orleans Hornets (now Pelicans) in the 2005 NBA Draft. He’s played with the Phoenix Suns since 2020.