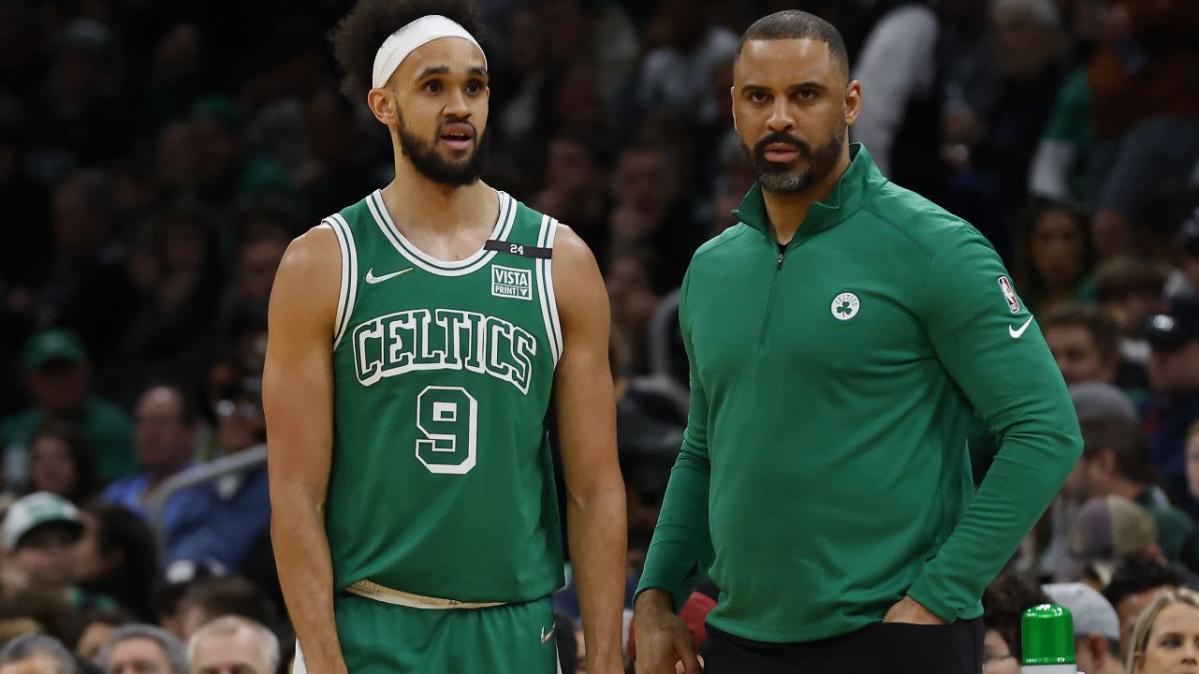 Derrick White‘s instincts on the basketball court routinely put him in a position to score, whether it’s weaving his way into the lane for a floater, making a hard backdoor cut for a layup, or drifting to the corner for an open 3.

Now if only someone from the bull gang would kindly remove the manhole cover from the basket.

White does everything except put the ball in the hoop during what has to be one of the most confounding stretches of his career. On Tuesday night against the Bucks, he accomplished the borderline impossible, starting at point guard in place of the injured Marcus Smart, playing for nearly 30 minutes in a blowout victory, compiling a plus-22 . . . and scoring zero points.

White missed all six of his shots, including four 3-pointers, but contributed to the victory anyway. He recorded four rebounds and five assists while judiciously committing five fouls, and he handled the ball just enough to relieve the pressure from superstar Jayson Tatum in the face of Milwaukee’s aggressive on-ball defense.

The strange part is his misses generally aren’t cinder blocks tossed off the side of a building. He has a soft touch on floaters and runners that caress the rim before seeking alternate companionship, though his 3-point stroke is less pure in a manner betraying a lack of confidence.

Forsberg: Grant Williams is quickly making quite a national name for himself

On Tuesday, he missed in every which way. Brook Lopez blocked his first shot before White skimmed a corner 3. He upfaked Pat Connaughton from the left wing and drove into a one-handed pull-up from about 10 feet over Giannis Antetokounmpo that caught back iron. He bricked his next two 3’s off the side rim and back rim, respectively, and came up slightly wide right on his final attempt. He also stepped out of bounds twice on the sideline for good measure.

However personally frustrating his evening was, it didn’t impact the team’s overall explosion. The Celtics raced to a 65-point first half while stymieing the Milwaukee offense, with White nearly playing his primary defensive assignment, Wesley Matthews, to a draw. Matthews scored just four points in 30 minutes.

Still, assuming Smart returns for Game 3, the Celtics desperately need more offense out of White on the second unit. It may actually be the difference between reaching the Finals and falling to either the Bucks or Heat in the East. As recently as the final 10 days of the regular season, he shot a blistering .568 in five games, including 10 for 18 (.556) on 3-pointers. He has delivered in the postseason before, too, including a 36-point effort vs. the Nuggets in 2019.

He has never really found offensive consistency with the Celtics, though, and now he’s ceding playoff minutes to knockdown 3-point shooter Payton Pritchard, because the Bucks dare teams to beat them from deep. The rugged White is otherwise a better fit on both ends, since he can attack the paint to draw defenders, and at 6-foot-4 and 190 pounds, hold up on switches against larger players. But if he continues to be a liability from the field, he’ll leave head coach Ime Udoka with no choice but to limit his playing time.

That’s not how Brad Stevens envisioned White’s impact when he sent a first-rounder, the option of a future pick swap, and swingman Josh Richardson to the Spurs at the trade deadline for the unheralded guard.

White’s arrival coincided with the Celtics sharing the ball on offense and becoming a switching nightmare on defense. There’s still a role for him to play this postseason, but it’s going to require the occasional basket to work.

Banner 18 may actually depend on it.