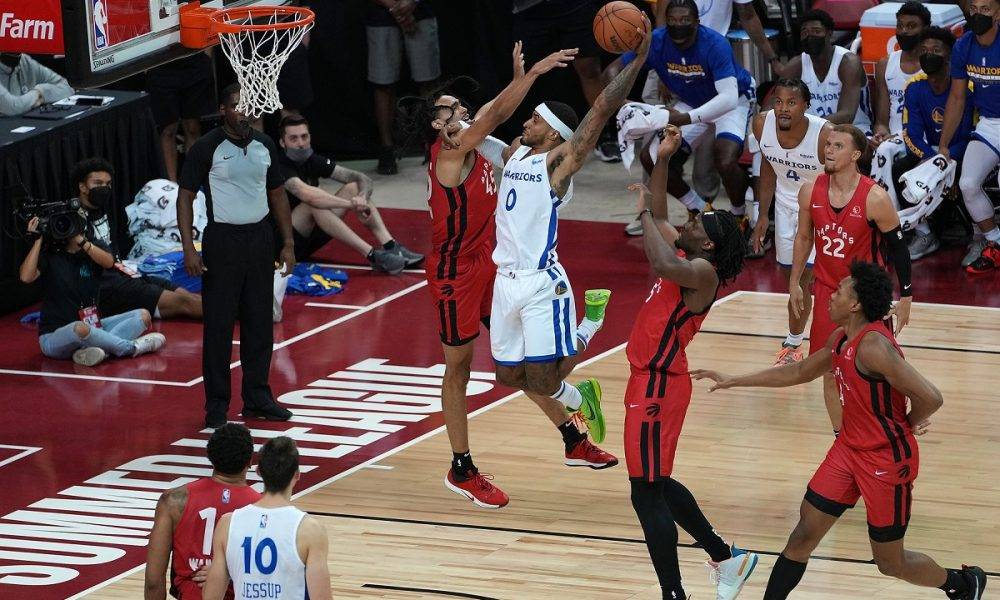 The Golden State Warriors will wind down the NBA Summer League schedule with a battle versus the Los Angeles Lakers at the Thomas & Mack Center in Las Vegas, Nevada.

The Lakers have alternated wins and losses at the NBA Summer League but will try to finish their tenure in Vegas with a bounce-back performance after getting blown out by the Detroit Pistons on Saturday. Meanwhile, the Warriors are fresh off of a tough one-point overtime loss versus the New Orleans Pelicans.

Can the Lakers close out the 2021 Las Vegas Summer League with a win against the Warriors on Tuesday night?

The Lakers came up short 103-86 against Detroit on Saturday despite the fact that the Pistons played without point guard Killian Hayes and No. 1 overall pick Cade Cunningham. Tres Tinkle led the starters with 13 points and nine rebounds while Trevelin Queen chipped in 11 points for Los Angeles in the loss.

Fresh off of a sloppy offensive performance, Los Angeles will hope to clean things up in its final game in Las Vegas on Tuesday. The Lakers shot just 42.9 percent from the field and 8-for-22 from 3-point range while committing 16 turnovers on the night.

Lakers got a gem in Austin Reaves

While he sat on Saturday, Vic Law Jr. has been one of the standout players for Los Angeles. Law and undrafted rookie Austin Reaves are two of the players fighting for a roster spot at the Summer League.

As a team, the Lakers have scored just 81.8 points per game while shooting only 40.5 percent from the field and a pedestrian 29.3 percent from 3-point range.

The Warriors suffered a tough 80-79 loss in overtime against the New Orleans Pelicans on Saturday. No. 7 overall pick Jonathan Kuminga led the team in scoring with 17 points and eight rebounds while Justinian Jessup scored 16 points in a losing effort for Golden State, which shot just 35.9 percent from the field in the loss.

As a team, the Warriors are averaging 88.0 points per game through four contests. Golden State has shot just 40.5 percent from the field and 36.8 percent from 3-point range in Las Vegas. It has also been one of the most active teams defensively, averaging 10.0 steals per game, good for fifth at the Las Vegas Summer League.

The Warriors come into this game favored by 2.5 points with the projected total set at 170.5 points. Bovada sportsbook has set Golden State as money line favorites with -145 odds and money line bettors can squeeze a little more value out of Los Angeles at +125.

Trends can be valuable information for bettors looking to improve their NBA betting strategy.

Below is a shortlist of trends for the NBA Summer League.

Below, you can find more NBA betting predictions and analysis for the NBA Summer League.

In terms of overall talent, the Warriors should have the edge in this matchup. Golden State’s Summer League team is headlined by its two first-round picks but it also features players with NBA experience, including Gary Payton II and Jordan McLaughlin. Without a true go-to option on offense, the Lakers have struggled in the half-court and have been one of the worst 3-point shooting teams in the Summer League. Look for the Warriors to cover the spread in this NBA Summer League showdown on Tuesday night.

While it might be tempting to take the Lakers in this spot, it’s not worth the risk. Los Angeles has one of the most underwhelming rosters in Las Vegas and the Lakers are coming off of an ugly loss versus a shorthanded Pistons’ squad. Meanwhile, Golden State is coming off of its worst offensive game of the Summer League and should have a good chance of bouncing back here. Rookie Moses Moody was rested in the team’s last contest but should be back in action on Tuesday. Take the Warriors to come out on top in this Summer League battle on Tuesday night.

The Warriors and Lakers are projected to combine for 170.5 points in this matchup but that might be a stretch here. Both of these teams have struggled with their efficiency during Summer League action. Los Angeles has knocked down just 29.7 percent of its 3-point shots while the Warriors have shot only 40.5 percent from the field overall. Golden State managed just 79 points in an overtime contest last time out against the Pelicans and the Lakers are averaging just 81.8 points per game in Las Vegas, so don’t expect either team to light up the scoreboard in this one. Take the under in this contest on Tuesday evening.