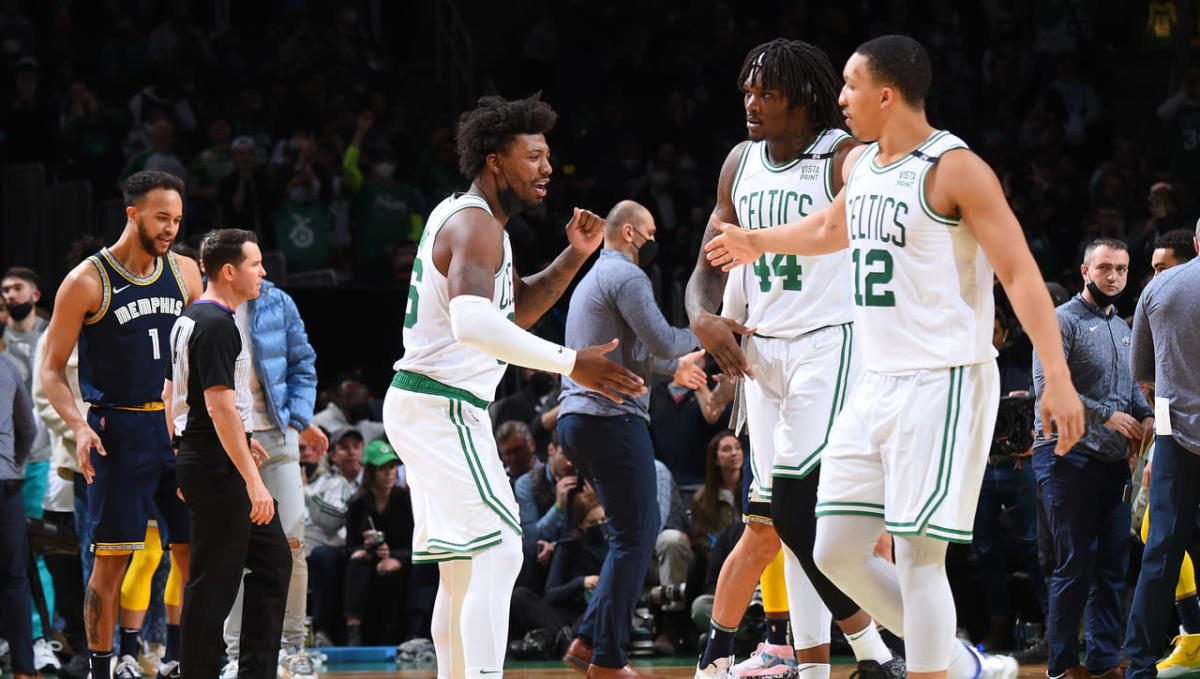 The Boston Celtics defense is elite, and Grant Williams believes it’s about time the group gets national recognition.

Williams held a press conference before Friday’s game vs. the Indiana Pacers to campaign for his Celtics teammates. He explained why all five of Boston’s starters should be named to the NBA All-Defensive Team.

“For one, we have the Defensive Player of the Year and it’s Marcus Smart,” Williams said. “He guards every position, he’s a guy that leads the team both on the offensive end and defensive end. Honestly, if you look back to 1996, Gary Payton was the same way in terms of leading his team, in terms of the dog energy.

“Second, Robert Williams, all these people talk about Rudy Gobert and all these guys changing shots, impacting the game. Rob has played how ever many games this season and been the focal point of our defense, and deserves that First-Team All-Defense spot because he can guard both in switching and he protects the rim at the rim with blocked shots.”

Report: Rob Williams could return from injury ahead of schedule

Williams read off some of Time Lord’s impressive stats before moving onto the rest of the starting lineup.

“Al Horford, who — to think that a guy his age, older, you know, can move his feet a little bit. He’s first in defensive net rating on the whole team,” Williams said. “He impacts the whole environment here as well as Jayson (Tatum) and Jaylen (Brown) who are incredible and deserve not only First-Team All-NBA honors, Second-Team All-NBA honors, but to think that we pivoted from a team that you guys in the media were so aggressive saying, ‘Eleventh seed. What is this Celtics team? Can they be together?’ And I think we’ve addressed those questions.

“Jayson Tatum leading us, being an MVP candidate, being a guy who not only has led the team from a vocal standpoint but has led the team on the court night in and night out both on the defensive and offensive end, impacting both sides of the ball.

“Jaylen Brown being the guy who, look at his position, not many people can do what he does. Scoring the ball as well as guarding 1 to 4, being the guy that has had those ups and downs but has stayed consistent with us.

“And then last but not least, I just wanted to say, this team, my brothers have done an incredible job of not only staying together through the ups and downs throughout the season, but sometimes you kind of want to single out those guys who deserve that attention, who deserve those awards. So, hopefully ya’ll carry that as you go. Hopefully you all have that same type of energy because these guys deserve it. Without these guys, we wouldn’t be in the position that we’re in.”

As of Friday, Smart is the odds-on favorite to win his first Defensive Player of the Year award. Robert Williams is a few names further down on the list, but he was among the frontrunners prior to suffering a torn meniscus.

Not all of the C’s starters are likely to take home hardware at the end of the season, but Williams’ words undoubtedly resonate with his teammates. It isn’t hard to see why he’s a finalist for Teammate of the Year.

Brayden Point with a Goal vs. Chicago Blackhawks