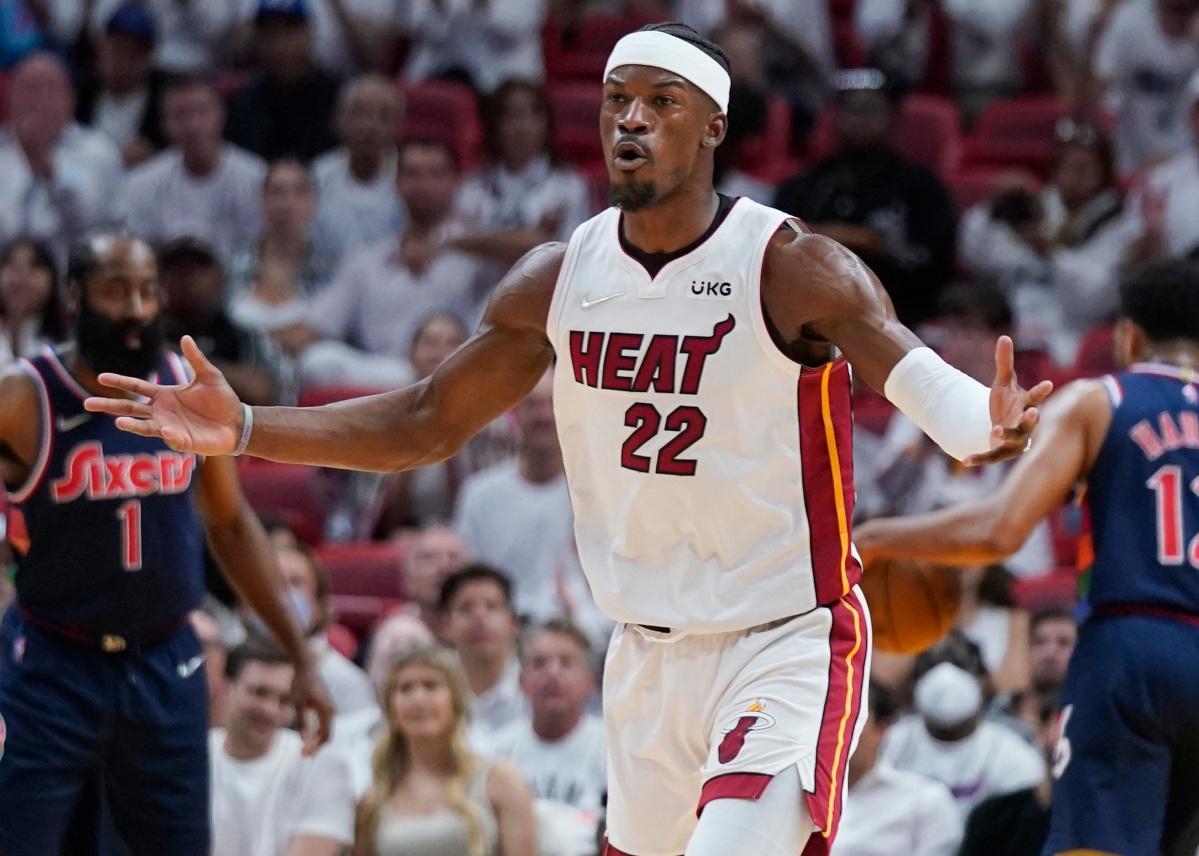 Sometimes, a close series just comes down to the home team playing better than the road team.

That’s how the Miam-Philadelphia Eastern Conference semifinals series has turned out.

The home team has won every game, and on Tuesday in Game 5 in Miami, the Heat, who were without injured Kyle Lowry, held serve and thumped the Sixers 120-85 to take a 3-2 series lead.

The Heat have played better across the board at home, and that remained the case in Game 5. It was a much better performance from Miami’s starters, who were outscored 183-135 in the two games in Philadelphia, and reserves.

SPORTS NEWSLETTER: Get the latest news and analysis in your inbox

Max Strus had 19 points and Gabe Vincent added 15 points for the Heat, who got a game-high 23 points from Jimmy Butler.

Game 6 is Thursday in Philadelphia (7 p.m. ET, ESPN). The Heat can close out the series and advance to the conference finals for the second time in three seasons. But it remains to be seen if they can get the job done on the road.

Little bit of everything from Butler

In Games 3 and 4 in Philadelphia, Butler did a ton of scoring — 77 points. The Heat didn’t need as much scoring from Butler in Game 5. He delivered a solid all-around performance: 23 points, nine rebounds, six assists and a steal.

While he made two 3-pointers, he continued to do work inside the 3-point line, scoring 12 points in the paint.

Joel Embiid fell into the first row of courtside seats and grabbed his back. He rolled on the ground, his face in pain after Dewayne Dedmon swatted the basketball into his masked face — three games after returning from a facial fracture and concussion.

And he’s dealing with a torn ligament in his right (shooting) thumb.

Embiid is giving everything he has, but it’s clear he’s not 100%. Still, the Sixers are better with him on the court, and he gives them their only chance to win the series.

In Game 5, Embiid had 17 points, five rebounds, two assists and one steal.

TNT’s Charles Barkley suggested on Inside the NBA at halftime that Embiid was having a down game because he was distracted by not winning the MVP. But multiple injuries are the culprit.

The Sixers played well enough at home to win two games, and James Harden produced more with Embiid back in the lineup.

There are glimpses of the old Harden on 3-pointers and drives to the rim. He had 14 points, six rebounds and four assists but still needs to be better — closer to a 20-point triple-double for the Sixers to have more success. But it’s just not on Harden and Embiid. Danny Green (six points) and Tyrese Maxey (2-for-10 shooting) can also do more.

The difference between home and road performance in this series for both teams has been stark.