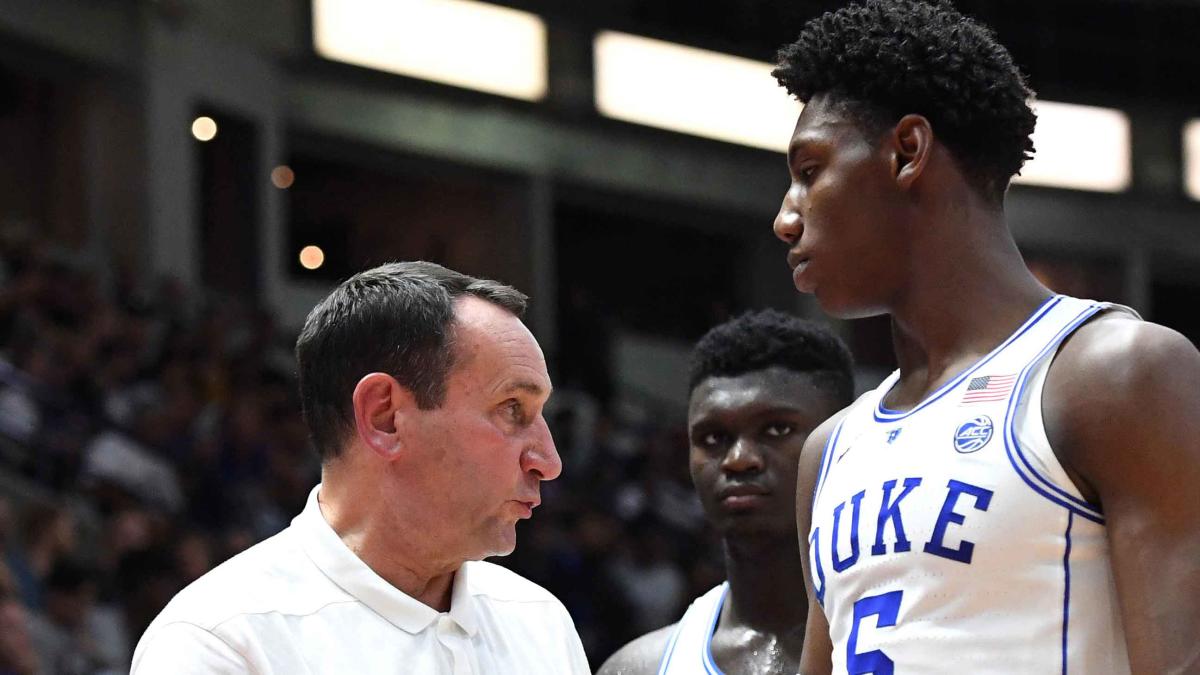 How many NBA players did Mike Krzyzewski coach at Duke? originally appeared on NBC Sports Chicago

Mike Krzyzewski is a college basketball icon, but his impact extends into the professional ranks, as well.

Despite never playing in an NBA game or patrolling an NBA sideline, Coach K’s impact on the league has stretched four decades. Over 41 years, Krzyzewski has built dominant, championship-winning Duke teams while setting up his players for professional success.

Saturday marks an important stop on Coach K’s retirement tour. Krzyzewski will coach his final game at Cameron Indoor Stadium when Duke takes on rival North Carolina in the regular-season finale. After that, he will have just the ACC and NCAA tournaments left before his storied coaching career comes to a close.

Paolo Banchero, a projected top pick in the 2022 NBA Draft, headlines the roster of Krzyzewski’s final squad. Banchero, A.J. Griffin and Wendell Moore could be the last Blue Devils to land on the impressive list of NBA players with Krzyzewski ties.

As Krzyzewski prepares for his final home game, here’s a look at his Duke players’ pro careers:

How many NBA draft selections has Coach K coached at Duke?

Sixty-eight Duke players have been selected in the NBA draft since Krzyzewski took over in the 1980-81 season.

Gene Banks was the first Krzyzewski-coached Duke player to be selected in the NBA draft, going to the San Antonio Spurs at No. 28 in the 1981 NBA Draft. Jalen Johnson serves as the current bookend and was the only Duke player to be drafted in 2021, as the Atlanta Hawks took him with the 20th pick.

How many first-round NBA draft sections has Coach K coached at Duke?

Of the 68 players from Duke who were drafted, 42 of them were taken in the first round.

It took a while before one of Krzyzewski’s players became a first-round pick. Johnny Dawkins became the first when he was selected by the Spurs with the 10th pick in the 1986 draft.

In recent years, Duke has been a prominent staple of the first round. From 2009 to 2019, at least one Duke player was selected in the first round each year. After being left out of the 2020 first round, Johnson got the school back into the top 30 picks.

How many NBA lottery picks has Coach K coached at Duke?

Of the 42 Coach K players selected in the first round, 28 were taken in the lottery. That number is the most for any school or coach in NCAA history.

While the Spurs’ pick of Dawkins at No. 10 would fall into the modern lottery, it wasn’t until 1989 that a Duke player was selected by a team that was in that year’s actual lottery. Danny Ferry went to the Los Angeles Clippers with the No. 2 pick in 1989, a year that featured a nine-team lottery.

The last season in which a Duke player was selected in the lottery was 2019, when three players were taken off the board in the top 10.

How many No. 1 picks has Coach K coached at Duke?

Three No. 1 NBA draft picks have been coached by Krzyzewski, more than any other school with the exception of Kentucky, which also has three.

Elton Brand was the first Krzyzewski player taken with the top pick, going to the Chicago Bulls in 1999. Twelve years later, the Cleveland Cavaliers took Kyrie Irving at No. 1 in the 2011 draft.

The headliner from the 2018-19 Duke team was the most recent No. 1 pick to play under Krzyzewski. Zion Williamson went No. 1 to the New Orleans Pelicans, while RJ Barrett went No. 3 to the New York Knicks and Cam Reddish went No. 10 to the Hawks.

How many Hall of Famers has Coach K coached at Duke?

Only one of Krzyzewski’s players is in the Naismith Memorial Hall of Fame with him: Grant Hill.

Hill played under Coach K from 1990 through 1994, winning national titles his first two seasons and reaching another final in his senior year. He was selected by the Detroit Pistons with the third overall pick in the 1994 draft and went on to build a Hall of Fame career that spanned four teams and featured a Rookie of the Year Award, seven All-Star selections and five All-NBA selections.

How many Duke alumni are currently in the NBA?

Twenty-two former Coach K players are in the league right now, and a handful have a chance to join him in Springfield one day.

Here are the former Blue Devils currently in the NBA listed in alphabetical order: