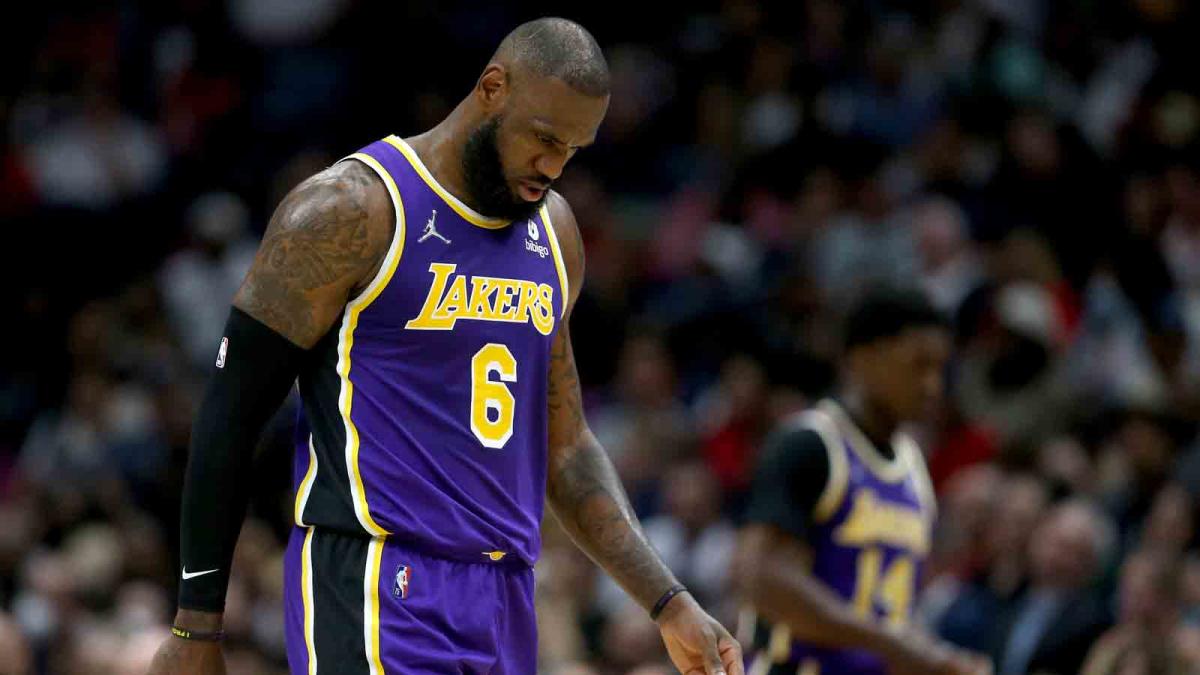 How many times has LeBron James missed the NBA playoffs? originally appeared on NBC Sports Boston

LeBron James has played in more playoff games and scored more postseason points than any player in NBA history. But he won’t add to those totals this season.

The Lakers – a team that entered the season as championship contenders with James, Anthony Davis and Russell Westbrook – not only will miss the playoffs but failed to qualify for the Western Conference play-in.

They were eliminated Tuesday with three games remaining after falling to the Phoenix Suns, 121-110. It was the Lakers’ seventh consecutive loss, dropping their record to 31-48.

With injuries to Davis and James, who averaged 30.3 points per game at 37 years old, the Lakers’ Big 3 played just 21 games together this season. That prevented the team from keeping pace with the rebuilding San Antonio Spurs, the Zion-Williamson-less New Orleans Pelicans, and a Los Angeles Clippers team without Paul George most of the season and without Kawhi Leonard the entire season.

So, the NBA postseason will go on without James for just the fourth time since he entered the league in 2003. Here’s a look back at the three previous LeBron-James-led teams that missed the NBA playoffs.

No, a 19-year-old LeBron James couldn’t lead the Cavs to the playoffs in his rookie season. But he got very close.

James graduated high school and joined a team that had gone 17-65 before striking gold in the draft lottery. Playing alongside the likes of Zydrunas Ilgauskas, Carlos Booker and Ricky Davis, James led Cleveland to a 35-47 record. The Cavs fell one game short of the postseason, finishing just behind the 36-46 Boston Celtics for the eighth spot in the Eastern Conference.

James – who averaged 20.9 points, 5.9 assists and 5.5 rebounds and became the youngest recipient of the NBA Rookie of the Year award – helped in areas other than just the win column. His wine-and-gold No. 23 jersey was the top seller in the NBA and the Cavs went from having the league’s lowest home attendance (11,497) to ninth-best (18,288). LeBron couldn’t turn the Cavs into a playoff team in year one, but he made them a marquee attraction overnight.

LeBron James got better, which meant the Cavs got better. But the rest of the Eastern Conference also got better.

Still, Cleveland entered the final game of the regular season tied with the then New Jersey Nets for the final playoff spot. James – in a starting unit with Ilgauskas, Eric Snow, Drew Gooden and Ira Newble – played all 48 minutes and posted a triple-double in a 104-95 win over the Toronto Raptors as the Cavs finished the season 42-40. But the Nets, led by Vince Carter and Jason Kidd, defeated the Celtics 102-93 to finish with the same record, claiming the final playoff spot thanks to their 3-1 season-series win over the Cavs.

It would be the last time LeBron missed the playoffs until…

LeBron James’ first season in Los Angeles did not have a Hollywood ending.

His streak of 13 consecutive playoff appearances was snapped during an injury-riddled season where James played just 55 games, his fewest in a single season to that point. It also snapped James’ streak of eight consecutive Finals appearances.

Last time LeBron missed the playoffs was in 2005

That yearâ¦
âªï¸ Netflix was delivering DVDs
âªï¸ Apple didnât have an iPhone
âªï¸ YouTube was founded
âªï¸ Aubrey Graham wasnât Drake yet, he was Jimmy Brooks on Degrassi pic.twitter.com/Yi20zF9I5Z

With James surrounded by a young core that included Lonzo Ball, Brandon Ingram and Kyle Kuzma, the Lakers were eliminated with 10 games remaining in the season. The Lakers finished 37-45 and overhauled the team in the ensuing offseason. They traded for Anthony Davis, replaced Luke Walton with Frank Vogel, and went on to win the 2019-20 NBA championship in the Disney bubble during the COVID-19 pandemic shortened season.

Having won four championships, James has played in 266 career playoff games. That is seven more than Derek Fisher and 96 more than the next active player on the list, Andre Iguodala (170).

But those playoff numbers for LeBron will be staying right where they are for now.