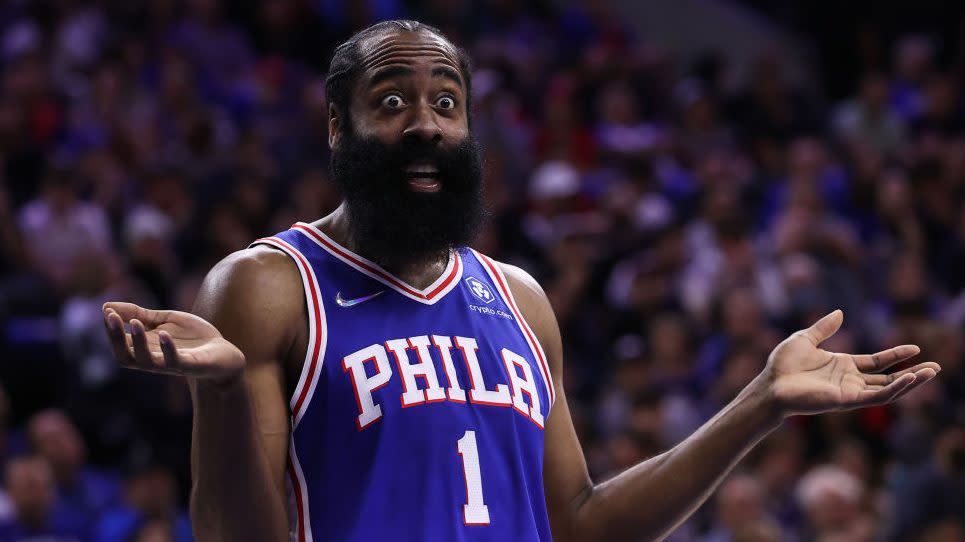 James Harden will be back with the 76ers.

“I’ll be here, yeah,” he said Thursday night after a lackluster, low-effort performance where he took and missed just two shots after halftime, the former league scoring leader not getting one point in the second half of an elimination game.

His return to Philly was never in doubt — Harden’s biggest supporter on the planet may be 76ers GM Daryl Morey, who moved heaven and earth to get him to Philadelphia at the trade deadline. But there are plenty of questions.

• At what price does he return?
• Will he accept less than a max extension?
• And for how many years?
• How committed is Harden to changing his diet, his workout habits, or whatever else is needed to be the player Morey and the Sixers thought they traded for?
• What will Harden’s legacy be?

WHO HARDEN IS NOW

Morey is a smart man; he understood he was not trading for the 2018 MVP version of Harden.

But he also clearly thought Harden was closer to that guy than the player we all saw over the final month of the season and playoffs. This version of Harden was holding the 76ers back (and Tim Legler laid it out perfectly on ESPN).

We only saw Houston Harden in flashes this season (particularly the first four games after he was traded, and in Game 4 against the Heat). It was the same for Harden in Brooklyn, although it felt less pronounced — he can’t just blow by guys in isolation anymore. That’s what Morey had been banking on. The Harden who could get into the paint at will and used that to set up the game’s best stepback 3. The guy who could draw fouls at a rate that frustrated opposing coaches and fans. That Harden has faded with a couple of hamstring injuries and the passing of time.

Except he wasn’t a great playmaker either in Philly. He was good but not elite.

Harden was not the version of himself the 76ers need to contend.

All of that leads to the biggest offseason question for the 76ers: What will Harden’s price be to return?

Harden has a $47.4 million player option hanging out there. If he picks it up, the 76ers and Harden could kick the free agency question down the road a year and just let him play out this contract. Or, they can extend him off this contract for up to four years, $223 million. If he doesn’t pick it up, Harden becomes a free agent. Then the max Morey and the 76ers could offer is five years, $270 million.

After watching Harden this postseason at age 32 (he turns 33 in August), Philly will not want to be on the hook for five more seasons of Harden at max money (either extended or on a new deal). That has to be a non-starter, even for Morey.

“Whatever allows us to continue to grow and get better and do the things necessary to win and compete at a high level,” Harden said as the follow-up to his “I’ll be here” line.

Does he mean it? Let’s say there’s skepticism around the league.

The model the 76ers want Harden to follow is out there. Chris Paul was in a similar situation a year ago and did not pick up his $44.2 million player option, instead signing a team-friendly four-year contract that guaranteed him $75 million and potentially up to $120 million over the course of the deal. CP3 could have squeezed more money out of the Suns — and it would be shocking if Harden did take that little guaranteed — but took less to put himself and the Suns in a position to contend.

Would Harden follow that path? Will Harden compromise and take $15-17 million less this coming season to get the security of years and more money overall? Or is he going to opt-in, take the biggest payday he can get next season, and see what comes next? The ball is in Harden’s court.

These are Harden’s legacy years.

He’s an MVP, a seven-time All-NBA player, a three-time scoring champ and a lock Hall of Famer. His legacy as one of the game’s great scorers is secure. But that legacy also comes with a history of disappearing in the playoffs — as he did in Game 6 Thursday — and a trail of conflicts with former teammates (Dwight Howard, CP3, Russell Westbrook, Kevin Durant) that has seen him or that player jump teams to get away.

Philadelphia is Harden’s last chance to really fit in with a team, win a ring, or come close trying, and change that narrative.

It didn’t feel things were changing after Game 6.

“We ran our offense. The ball just didn’t get back to me,” Harden said of his second-half effort in Game 6.

The 76ers are a capped-out team built around an MVP-level player in Joel Embiid, but do they have enough to contend?

Not as constructed, the Heat and Jimmy Butler — the Embiid co-star who got away — proved that beyond a doubt. The 76ers need a better version of Harden, and they need to tweak the roster around their stars — both things Harden has some say over. Harden controls what kind of shape he shows up in next season and how focused he will be. Depending on his contract choices, he also can help the 76ers have some financial room to make moves with role players.

James Harden will be there next year in Philadelphia.

But the answers to the essential questions about what happens next in the City of Brotherly Love will be answered over the next couple of months. Most of those answers depend on Harden.

Check out more on the 76ers

Joel Embiid on tough P.J. Tucker: ‘I’d be lying if I said that we’ve… Jimmy Butler: ‘Tobias Harris over me?!’ In Game 6, Heat and 76ers show they’re on different levels

James Harden will be back with 76ers, but what version of him will determine team’s fate originally appeared on NBCSports.com